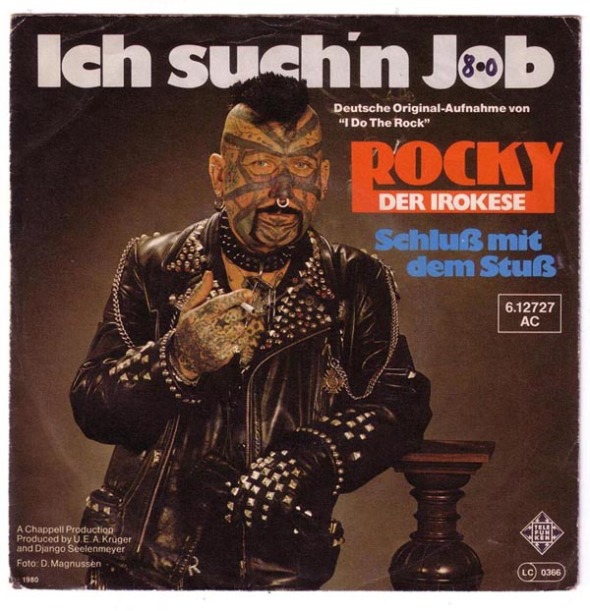 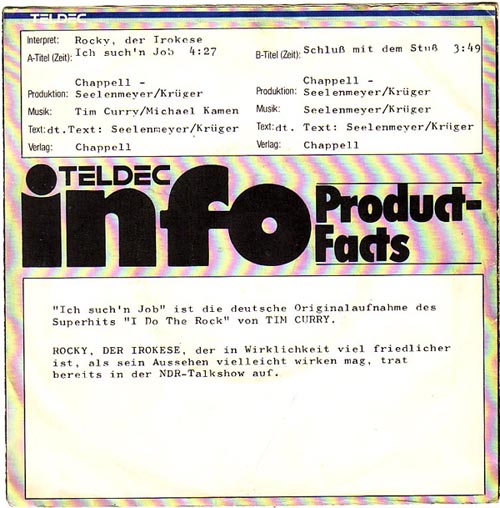 Rocky der Irokese (Rocky the Mohawk) was a Rocker/Biker from Hamburg, St.Pauli. That`s where he met Udo Lindenberg, one of Germany’s biggest rock stars. Lindenberg made him part of the Panikorchester, a Sideshow-like group of freaks, that appeared with him on stage from 1975 to 1984.

(Photograph by Chris Wroblewski, taken from the book “Tattoo- Pigments Of Imagination”,Virgin Books 1987)

Apart from the cover, the record is not Punk, it`s not really rockin` and Rocky is not really “singing”. It´s REALLY charming though WHAT he is saying in the song. And how he is saying it. When i heard his voice for the first time, i was surprised how soft it was. From his appearance, you expect something much rougher . The lyrics are all about personal freedom and attacking the prejudice of the average people against minorities. The chorus is:”So, Stop the prejudice and a little more tolerance, if you please!”(Also, Schluß mit den Vorurteilen und ein bißchen mehr Toleranz, wenn ich bitten darf!”

The people from the record company felt the need to point out that :”Rocky is in reality much more peaceful, than his appearance might suggest and already appeared on German TV talk-shows”, on the back cover. Then again, i don`t think record company people today, would give a guy like Rocky a chance at all.

Rocky’s real name was Gerhard Bauer and he was born in Berlin on Nov. 26. 1926. He got his first tattoos in a east German prison, where he was detained for 8 years for espionage. The tattoos on his face were done by Tattoo-Theo, a local Hamburg tattooed man. Not a proper tattoo-artist but a friend of his who was willing to do it. Actually, from what you can see on the photo they were cover-ups for swastikas. Also one his right hand he is wearing a glove to cover up another swastika. Oh man, those bikers…

In 1985 he found Jesus and was baptized in a small free church. I remember that some girls from the punk scene in Hamburg befriended him when he was in hospital with cancer. Rocky died April 12. 1987.

MP3 is gone but you can hear it here: ROCKY DER IROKESE, Schluß mit dem Stuß, 1980

The Youtube uploader used my scan of  Chris Wroblewski´s photo of Rocky.

This is the A-side: