The story of  Afro Carribean artists living and working in Germany, like Billy Mo, Roberto Blanco and Mona Baptiste has not been written yet.  At least I´ve never seen the book. Even though they were mostly offered Schlager material, sounds the conservative German audience was used to, these artists managed to leave a legacy of music in the post-war era that contributed greatly in making German culture much more varied and less insulated. 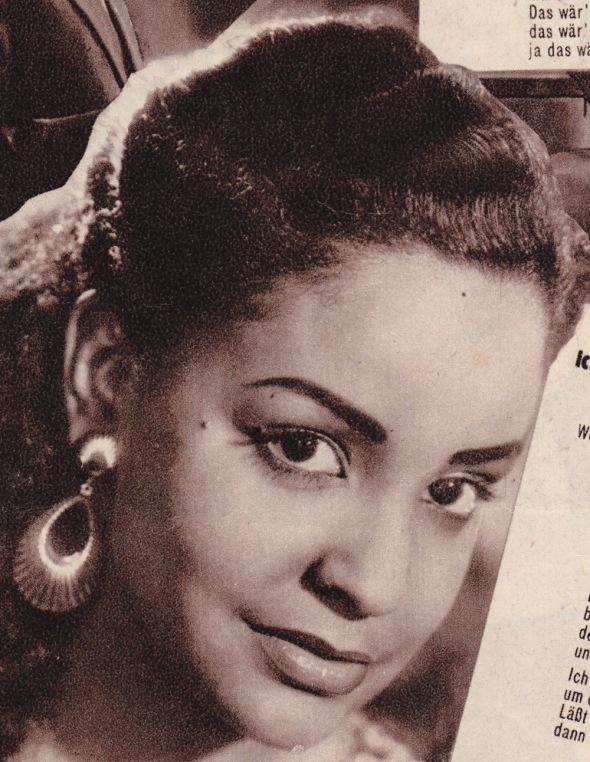 Mona Baptiste, born in Trinidad in 1928, had already  established herself as a blues singer, when she arrived in London in 1948. In the subsequent years she worked with Cab Kaye in London and Stephane Grapelli in Paris. In 1953 she got her first contract with Polydor in Germany and recorded and performed together with Werner Müller and later with Bert Kämpfert. Starting in 1954 she appeared in seven German films in the 50s. Mona Baptiste continued to work into the 70s. She died in 1993 in Krefeld, Germany.

This song is the title track to the film  Mädchen für die Mambo-Bar from 1959. Last year I posted Heiße Musik, another song from the film here. Bear Family Records has reissued Mona Baptiste´s early 50s material on the LP Es liegt was in der Luft and these two tracks on their great all-girl CD compilation Vor Kurven wird gewarnt.