So far I have posted two other 45´s by the Belgian instrumental group the Cousins  here and here. You can still download most of their material from the Belgian Twist and Frit blog but just because I found this record last week here´s their slightly faster version of Rusty & Doug Kershaw´s Cajun Rockabilly classic Hey Mae.

When The Cousins Come Twistin´ In is a Twist version of  When the Saints Go Marchin´In.

THE COUSINS, When The Cousins Come Twistin´In, 1962

LUCKY THOMPSON AND THE JACK SELS TRIO, One Cool Night, 1959 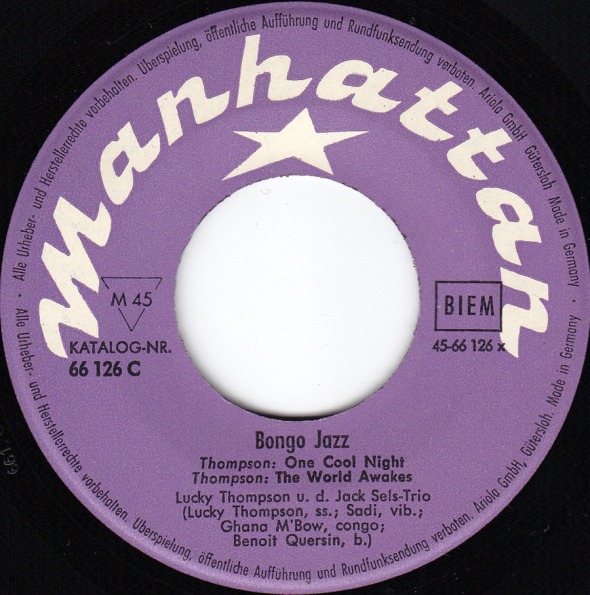 When it comes to finding records I´m actually quite lazy. Most of my record hunting (or rather fishing) I do in my  neighborhood. Once a week I make a quick round through the stores to see if they have new stuff. It usually only takes a couple of minutes in every store to check and sometimes month go by without any cool records coming in. My street, which is a side street that goes off some bigger street where a lot of people come to shop and promenade, used to have two thrift stores. Only few people find their way there. It´s my little secret digging spot. That´s why I consider the records  that show up there to be “my records”.

One time I came into the store and there was a brand new box full of 45´s. Only SOMEBODY ELSES FINGERS WERE ALREADY IN IT!!! I was furious. Who was that asshole? How dare he comes snooping around in MY STORE?! And why couldn´t I have come 30 minutes later so that I wouldn´t have to see him pull out a Bill Black Combo 45  and a Jack Hammer 45, both with picture sleeves and in very nice condition?  But I was even more angry with myself because I don´t need any more records really. Why should I get envious over a bunch of stuff that 30 minutes before I didn´t even know was there?

Well, then it was my turn. What a surprize! For some reason the guy left this record in the box.  I  paid 2 Euros for it and was very much at peace with the world again. 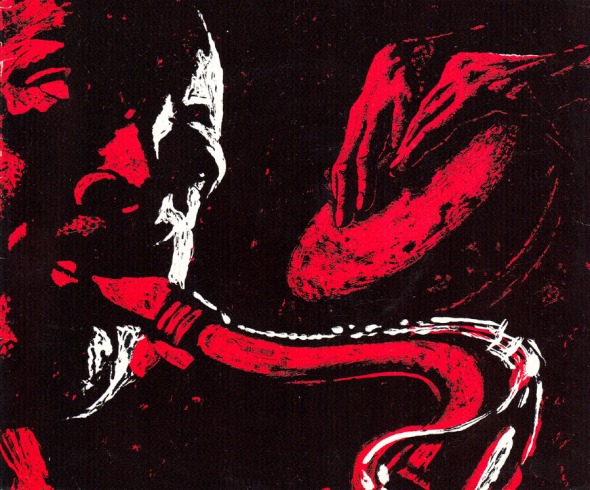 Lucky Thompson ( 1924 – 200)  was an African-American Jazz tenor and soprano saxophonist.  He had a long career playing Swing with Lionel Hampton, Lucky Millinder and Count Basie,  worked in Rhythm & Blues and later Bop and Hard Bop with Kenny Clarke, Miles Davis, Dizzy Gillespie and Milt Jackson.  Thompson lived in Paris from 1957  to 1961.

In 1962 Thompson came back to New York, where he signed with Prestige and cut some solid albums . Not long after his return, Thompson´s wife died and the ghosts of his former business disputes reemerged. He lived for a time in Lausanne, Switzerland, but returned to the U.S. in the early 70´s to teach music at Dartmouth. His last recordings were Goodbye Yesterday (1972) and I Offer You (1973), made for the Groove Merchant label. From that point he descended slowly into despair, homelessness and dementia. Thompson lived for a while on a Canadian island, moved down to Savannah, Georgia, and eventually found himself on the streets of Seattle. Several musicians over the years reported finding a dissolute, half-coherent Thompson wandering the city. He finally found a place at the Columbia City Assisted Living Center, where he lived from 1994 until his death.

After a rollercoaster lifetime, Eli ´Lucky´ Thompson died from complications of Alzheimer´s disease on July 30, 2005, at the age of 81. Survivors include his son, Darryl.

Jack Sels ( 1922- 1970) was a Belgian Jazz Saxophonist and a pioneer of modern Jazz in Belgium. He played in various groups from the mid-40´s to the mid-60´s but left only few records.  Like Thompson he struggled as an artist:

In ’63, financial difficulties forced him to work at the Antwerp harbour to unload boats. The last three years of his life, his health unfortunately declined, making it very difficult for him to play.

Jack Sels  was only 48 when he died. Lucky Thompson got to be 81 but was homeless and broke. They certainly lived the lives of true jazz musicians. Both must have met during Thompson´s time in Paris. Musically they matched real well. I don´t know a thing about jazz but this is cool. Like a more cheerful Modern Jazz Quartet. Like,  real European beatnik jazz…

LUCKY THOMPSON AND THE JACK SELS TRIO, One Cool Night, 1959

LUCKY THOMPSON AND THE JACK SELS TRIO, The World Awakes, 1959

I never knew that Jack Sels was also the genius behind this great two-sider before I found his discography. Apparently he had recorded some Boogie records for the Belgian Ronnex label in the mid-50´s, so he had some experience in the Rock´n´Roll field before recording these Twists. Really cool for a sophisticated Jazz musician to be playing wacky music for Teenagers. 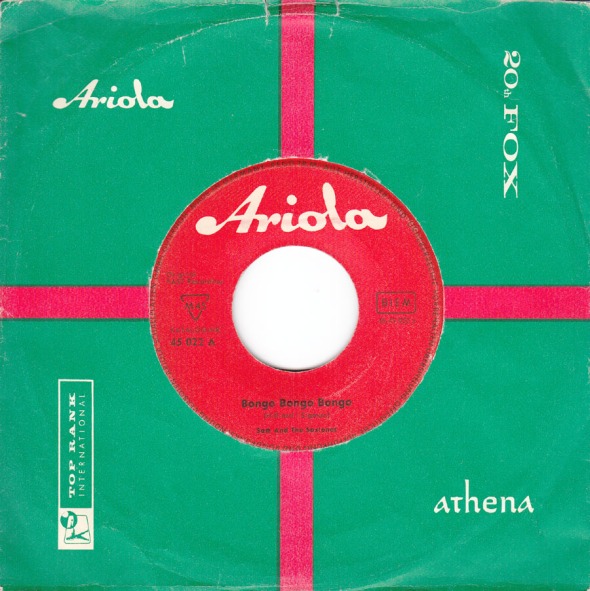 Bongo Bongo Bongo also  known as Civilization was originally recorded in 1947 by the Andrews Sisters and later that year by Louis Prima.

So bongo, bongo, bongo, I don’t wanna leave the Congo, oh no no no no no
Bingo, bangle, bungle, I’m so happy in the jungle, I refuse to go
Don’t want no bright lights, false teeth, doorbells, landlords, I make it clear
That no matter how they coax him, I’ll stay right here

They hurry like savages to get aboard an iron train
And though it’s smokey and it’s crowded, they’re too civilized to complain
When they’ve got two weeks vacation, they hurry to vacation ground
They fish and they swim, but that’s what I do all year round

So bongo, bongo, bongo, I don’t wanna leave the Congo, oh no no no no no
Bingo, bangle, bungle, I’m so happy in the jungle, I refuse to go
Don’t want no jailhouse, shotgun, fish-hooks, golf clubs, I got my spears
So, no matter how they coax him, I’ll stay right here

They have things like the atom bomb, so I think I’ll stay where I “ahm”
Civilization, I’ll stay right here!

Kaput is a weird semi- instrumental rocker. Semi, because there are a bunch of  words thrown in that do not really make sense. Some even in German:

As a  insignificant side note,  in German the word Kaput is actually spelt  Kaputt. But Angst,  Bratwurst, Gesundheit, Kitsch, Kindergarten, Rucksack, Schadenfreude, Wanderlust and  Zeitgeist are spelt exactly the same…

Both songs were featured on volumes of the Las Vegas Grind compilation that Crypt Records released in the 90´s.

As you probably know by now I usually put my best songs on top of the page. Not this time. This is the killer version of Kili Watch. The Cousins from Belgium sold 15.ooo copies of this record in 1960. I posted another real nice record by the Cousins in April here.   About everything the Cousins ever recorded can be found on the Belgian Twist and Frit´Blog.

I can hear the instrumental Rock´n´Roll fanatics yawning already but for those of you who have never heard this, it´s a wonderfully silly Rock´n´Roll song with great guitar breaks. 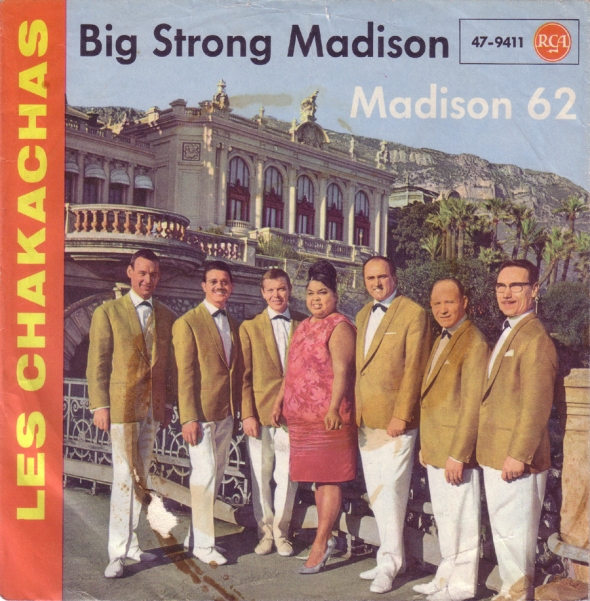 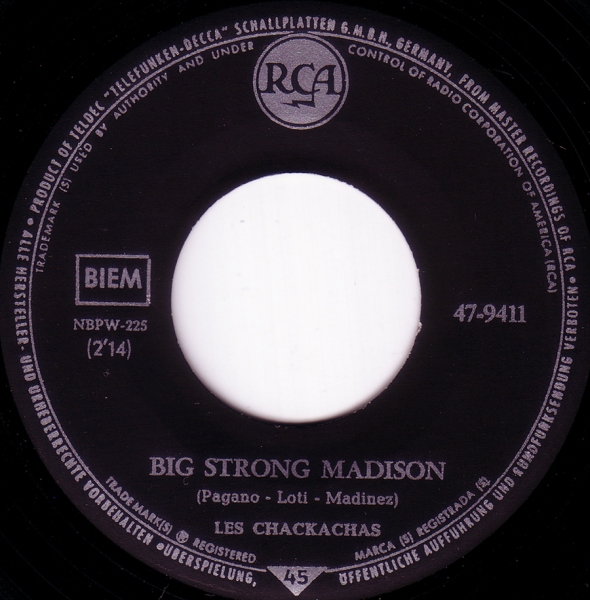 The Chakachas were a group from Belgium who played mostly Latin-American tinged music but also delved in the dance crazes of the early 60`s. In 1961 they hit in Germany with Twist Twist.

There is some nice guitar playing here and a nice beat and the dance instructions on the back of the sleeve make it easy to try the Madison yourself. Well, kinda… 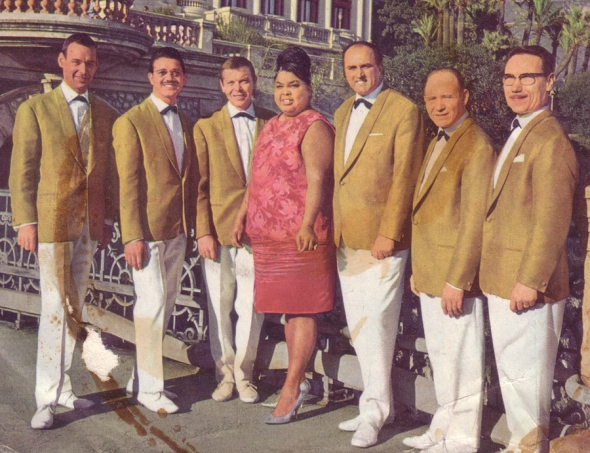 If you like these James Curtis songs you can find some more over on the fabulous TWIST AND FRIT blog.

JAMES CURTIS AND THE MADISSON, The Mashed Potato Stomp, 1962