On Sunday afternoon my girlfriend Julia and I went to Warsaw to see the first retrospective exhibition of polish cartoonist Ha-Ga . For the full story on Ha-Ga see my first post from February.

After a six and a half hour trip Szmon from Kultura Gniewu picked us up from Warszawa Centralna and took us to his nice new apartment. When I visited him last year with fellow Berlin cartoonist Mawil he was living together with his girlfriend in a crammed but incredibly organized 30 square meter apartment. Now they have a much bigger beautifully renovated and neatly decorated place in a old building from the 1930s overlooking the city.

We spend the next day in a park and went to the old part of town. It was the only place were we saw a lot of foreigners: tourists. The beautiful old Warsaw from before the war is only to be seen in this small picturesque area and it was sad to see how much damage the war (or rather Nazi-Germany) had brought to the city.

We went to a small restaurant and I had some delicious pirogie ( stuffed dumplings, a traditional polish dish) .

In the same area we found the Muzeum of Caricature and took these photos in the daylight.

In the evening we returned and met Kasia and Szymon who had come there directly from work.

The director of the museum Wojciech Chmurzynski had already started with his opening speech and Szymon explained that standing next to him was Zuzanna Lipinski, the woman who had invited us.

In the garden outside around 200 people had gathered. As was to be expected most of them grey haired. Just like in Germany the “Cartoon Scene” doesn`t seem to mix with the “Comics Scene”. If this had been a Comics exhibition the crowd would have been a lot younger. Ignorance on both parts is separating two genres that are actually so closely tied together.

The older “Cartoon” fans regard comics as too vulgar and the “Comics” fans think old cartoons are boring.

It was very nice outside in the garden and we sat at one of the many tables were Szymon introduced us to cartoonist Tomasz Niewiadomski. He loves cats and draws comics about them.

The exhibition was very well put together with a lot of original Ha-Ga drawings (mostly black and white line drawings but also some coloured with gouache) spanning from the 30s to the late 60s. Also shown were originals of her book illustrations and her posters, book and magazine covers were displayed.

The whole idea of a caricature museum made me wish for something like that in Berlin. Eryk Lipinski who founded the museum started by collecting cartoons from his colleagues.

It seems unlikely that something like that could happen today when most cartoonist care very little for original cartoon artwork let alone that of past decades.

After waiting out the first big rush to the b

uffet I finally got up the nerve to introduce myself to Zuzanna. She was happy to see me and apologized for being so busy. Her two daughters who grew up in England had met some members of her family for the first time, so it was also a family get together of sorts. I gave her the two German books and one of the 45s with the Ha-Ga cartoons that I had. Zuzanna gave me a catalogue of the exhibition and told us to come to the party afterwards.

Szymon and Kasia were tired from working all day and went home so Tomasz took us the party. It was held at a old actors cafe (decorated with hundreds of photos of actors) were cartoonists also used to meet. After we had a couple of beers Zuzanna introduced me to her brother, famous polish rock musician Tomek Lipinski and to director Chmurzynski who was quite drunk at that point and insisted I give him my private phone number. When the crowd got smaller we said goodbye to Zuzanna and Tomasz took us for a walk and later called us a taxi.

On Tuesday we didn`t feel like doing much so we spent half the day in a park. In the afternoon Szymon and Kasia took us to the university library. A impressive modern building that has a very huge playful and inventive garden on top of it. In the evening Kasia cooked pasta for us and Szymon showed us how to play “Guitar Hero III”on his X-Box. He was very good on that one Santana song.

On wednesday morning Szymon took us to the train station again and we said goodbye to Warsaw.

Thank you so much for your hospitality Kasia and Szymon . We had a great time. 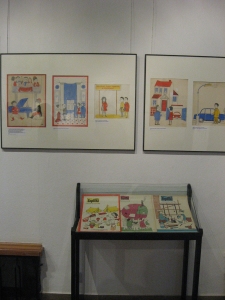 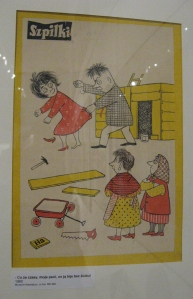 Recent Update: First retrospective exhibition of Ha-Ga’s works in the Museum of Caricature in Warsaw on the 12 th of May 2008

Last Friday I received a very nice mail from Zuzanna Lipinska, daughter of Polish cartoonists Anna Goslawska (Ha-Ga) and Eryk Lipinski. In February I had written about Ha-Ga with what little I could gather from my own small collection of her printed work and the even smaller amount of information from the Internet. Zuzanna pointed out some of the resulting misinformation so that I could add this new information to the post and change the errors.

Zuzanna has worked on a big retrospective exhibition of her mothers work that will take place at the Museum of Caricature in Warsaw starting on the 12th of May 2008. Zuzanna has also designed a new accompanying website to the exhibition.

It`s in Polish and English and it looks really great. It shows a lot of Ha-Ga`s beautiful illustrations for children`s books and her cartoons are collected in different topical sections. There is even a short film from Polish Television in 1957 showing Anna, Eryk and Zuzanna happily drawing cartoons together.

We exchanged some very nice mails and Zuzanna invited me to the opening of the exhibition in Warsaw and I`m looking forward to go now.

Thank you very much Zuzanna!

Niebiesko-Czarni (The Blue-Blacks) were one of the most popular Polish rock groups of the 1960s and early 1970s. Czesław Niemen played in the band for several years. Throughout their 14 year history (1962-1976) Niebiesko-Czarni released 8 LPs, 24 singles, sold over 3.5 million records and played more than 3000 shows.

The song “Ringo” is about a dog, not a Beatle. Listen to the dog barking in the middle of this great BIG-BEAT song!

That could be the whole story,but…

The drawing on the cover of this record was done by Ha-Ga, short for Anna Goslawska (1915-1975). In fact her signature can be found on a whole series of record sleeves for the state owned Muza label.

Finding out about her life and work turned out to be quite difficult, though.

Information about her husband Eryk Lipinski was a lot easier to find. Here`s what i got on him…

Eryk Lipiński (1908-1991). Graduate of the Warsaw Academy of Fine Arts 1934. Founder and Chief Editor of Polish satirical weekly magazine “Szpilki”. During World War II active member of the anti Nazi resistance, arrested for production of false documents, prisoner of Auschwitz. In 1978 founded Caricature Museum in Warsaw and was its director till 1991. His major awards include: 1948 – seven 1st prizes at the International Poster Exhibition in Vienna; 1964 – 1st prize for the best political poster of 1963; 1981 – “Distinguished Artist of the Year 1980” of The Association of American Editorial Cartoonists. Participated in International Poster Biennial Warsaw 1966-78 and numerous collective and individual exhibitions in Poland and abroad (Prague, London, Berlin, Vienna).

Anna and Eryk met as children in the village outside Warsaw, where they both lived as neighbours and it was Lipinski who encouraged her to start publishing her cartoons in Szpilki. She published her first cartoon in 1936. Starting with her pen-name Ha-Ga, Goslawska seems to have tried to make a little bit of a mystery of herself. In an article from 1958 it is mentioned that: “…of all things in the world, she didn`t want to tell, that she was the wife of famous cartoonist Eryk Lipinski.” Ha-Ga was a regular contributor of “Szpilki” , illustrated children`s books and designed posters.

But it was her cartoons that made the biggest impact. Big-eyed and always a little sad, her characters look quite different than the more conventional styles of the time . Compared to most of her contemporaries her stuff still looks fresh today.

(“Why aren`t you exercising with us?”—-“I`m an accountant, I have to do balancing all year round!”) 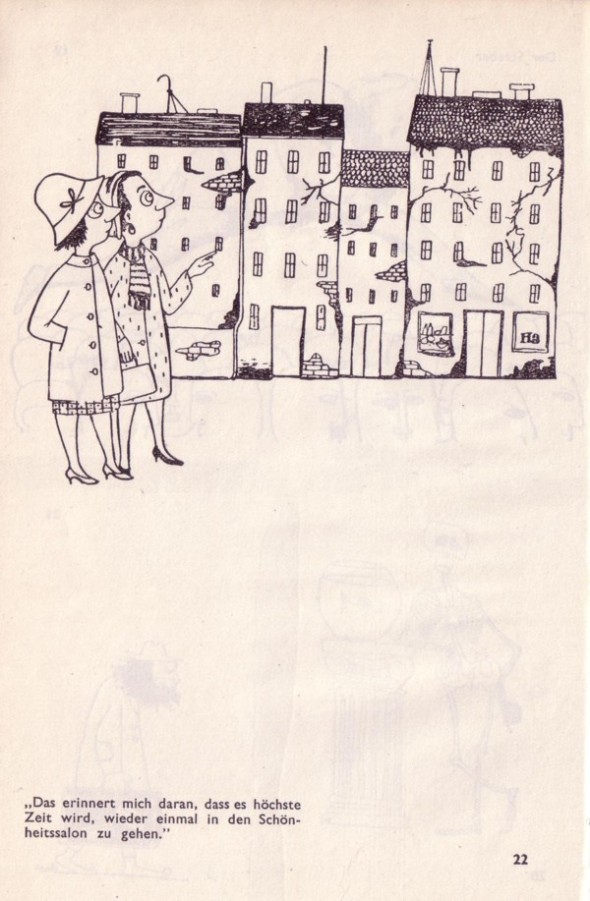 (“That reminds me, it`s high time for me to go to the beauty salon!”)

In 1955 Eryk`s son Tomek was born. Tomek Lipinski became a key-figure in the early Polish Punk scene of the late 70s/early 80s. He played in Tilt and Brygada Kryzys and is a well known Polish rock musician today.

Here`s a recent video of Tomek and Tilt

and here`s Tomek Lipinski on myspace.

I want to thank Szymon for finding and translating a lot of this information for me. This is the story of my dreams. It`s got all the right ingredients: Cartooning, Anti Nazi Resistance, Big-Beat and Punk Rock!

I just contacted Tomek to verify my story. Seems I got it wrong. Here`s what he wrote: “This is slightly incorrect in that I’m not HaGa’s and Eryk’s son. I had a different mother. However HaGa was Eryk’s wife and they had a daughter, Zuzanna who lives permanently in London. You might contact her directly if you wish. In April there will be a major HaGa’s exhibition in Caricature Museum in Warsaw (established by my late father).” Well, sorry for the mistake and thank you very much Tomek. I must go to Warsaw now in April…

Another Ha-Ga drawing on this one: Joanna Rawik and the Savages. Well, the savages are not showing their savage side here. Dzikusy, from Warsaw, have two great tracks on the “Wrenchin`the Wires” comp that came out a while back. It´s a real good compilation of all polish- all wild- beat bands! Try to find it. I´m not going to rip it for you…

In the east the beat bands were not as far removed from the pop singers as in the west. So there is quite a lot of material of this sort: beat/rock bands who back pop singers. In Poland, Czechoslovakia, Romania and Yugoslavia there are still alot of these great hybrids to be unearthed. The strict beat and garage fans might not like this stuff but I think that especially the girl singers are really great.