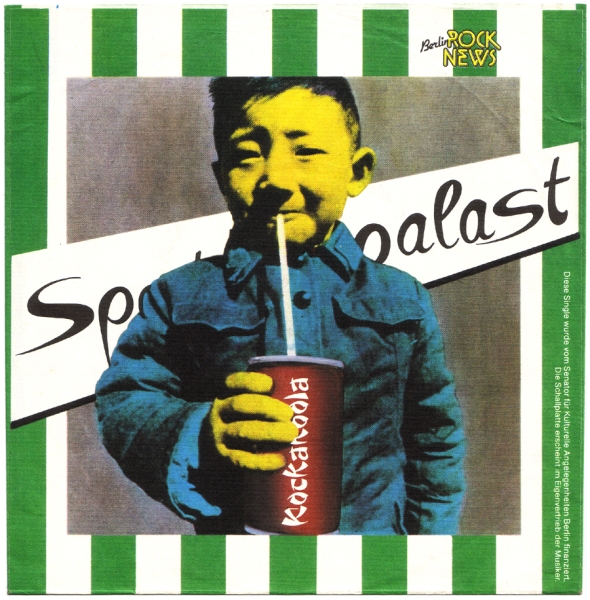 In 1980, the band Sportpalast came in first, in a band contest held by the city of Berlin, and won a record contract for this 45.

It was the first in a series, that was sponsored by various record labels. Each of the records had a press run of a 1000 and they were distributed by the bands themselves. That said, the female singer still managed to say “Scheisse” (shit), “Ficken” (fucking) and “Disco zerstört dein Gehirn” (Disco destroys your brain) on a record that was financed by the city of Berlin. Nena certainly wouldn`t have done that. I can only assume that it was this boldness that prevented the otherwise catchy song “Ich will hier raus” from being played on the radio and eventually becoming more successful.

“Sportpalast” is a well chosen name for a Berlin rock band. Built in 1910 the Sportpalast was Berlins first multi-purpose arena. Max Schmeling boxed there. Social-Democrats, Communists and Nazis held conventions there. Goebbels held his famous “Total War speech” there. After the war many rock groups played there, among them: Bill Haley, The Beach Boys, Jimi Hendrix, Pink Floyd and Deep Purple. It was torn down in 1973

I´m not sure if I would have liked this record at the time of it`s release. It`s not really sophisticated compared to what was happening in the Underground at the time. It´s not Punk, it`s not Post-Punk and a little too rock-ish for New Wave.

Strangely, today it sounds like a typical “Neue Deutsche Welle” (German New Wave) record. The weaker A-Side “Koockakoolaintschina” (Coca-Cola in China) points out that instead of drinking Coca-Cola the Chinese used to smoke Opium. The B-Side “Ich will hier raus” (I want out of here) though, is a fast saxophone-driven rocker with a touch of Poly Styrene. I really like it.

Extra were similar to Sportpalast in that they were also from Berlin and also had a female singer.

But while Sportpalast only recorded one 45, Extra recorded a LP and were more successful nationally.

Extra were featured on a 10″ New Wave-compilation called “Prima Tanzmusik” that included many well known German New Wave bands. I bought that record when it came out in `81 and while there were similar Hard Rock bands posing as New Wave on that comp, I remember particularly not liking the band Extra. Too rockish for my snobbish 15-year old taste back then. And I hadn`t even seen the naked bearded dude on the cover of their 45…

The German new music magazine “Sounds” wrote that Extra played “simple Hard-Rock in the most embarassing German tradition”. Actually they were not hard enough for the Hard Rock and not new enough for the New Wave crowd. 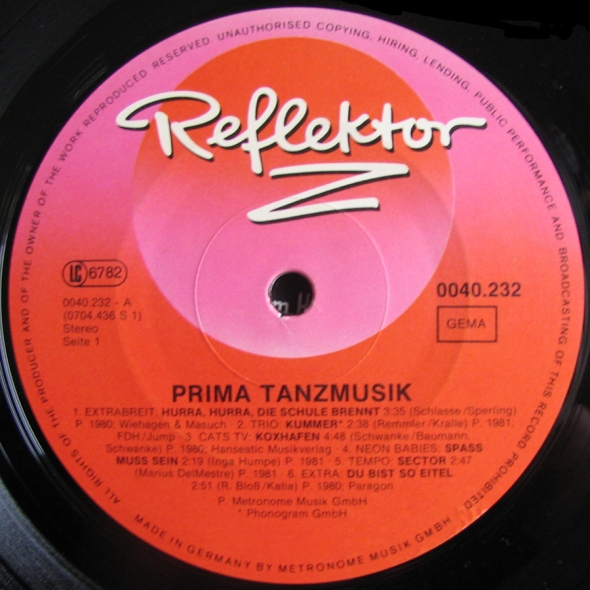 25 years later my taste seems to have changed. Now I like the aggressive voice of singer Katia and the powerful approach of Extra. A lot of the old German New Wave stuff sounds awfully tame and complacent today. Extra at least had some balls.