Since last week the protests in Iran have largely been suppressed and are now in the process of regrouping. The coming days and weeks will show how strong the movement really is.  As I wrote last week, I believe we have seen the crack in a system that is doomed to fall. By the way, here´s a interesting Iranian perspective about Why the Mullahs are Un-Iranian. All of this was overshadowed however by last week´s top international news:  the death of  Michael Jackson. And how could  the first time, at least in the last decade, that there has been massive resistance against  a Islamic dictatorship in a Muslim country, be more important than the death of the King of  Pop! He invented the Moon Walk, his best friend was a monkey and we knew him since we were kids!

This week I´ll return to my mainstay and initial reason to start this blog: advertisement records, flexi discs and private pressings by people who just wanted to leave a trace of themselves.  Records that are off the radar of most serious record collectors. I´m also happy to announce that Jungle World, the lefty pop culture paper that publishes my weekly comic-strip BIGBEATLAND finally, after bugging them long enough,  gave me a column. It´s basically a printed version of this blog in German. You can read the first installment of Berlin Beatet Bestes here and the second one here.

I bought this week´s stack of records at the little flea-market that is happening every Saturday down the street. My girlfriend and a couple of friends were waiting for me to have a coffee and to do the weekend shopping so I had about 15 minutes to pick them up. Also it was already 2 p.m. and the market closes at 4.  So I assume it was already combed over by other collectors. But as I wrote, these are the type of records that they always leave behind anyway. 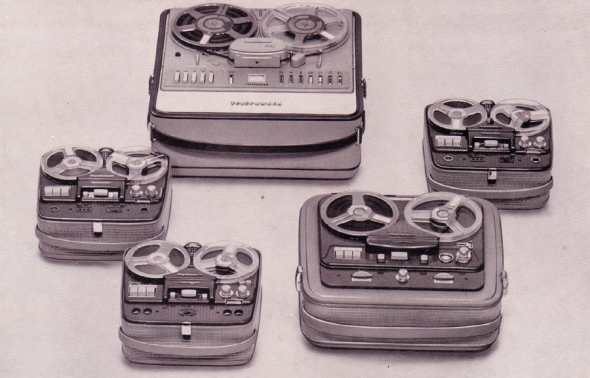 This little compilation EP called Töne gejagt und eingefangen ( Hunted and Captured Sounds) was released to commemorate the 9. International Amateur Recording Contest held in Amsterdam in the fall of 1960 and of course to advertise for Telefunken reel to reel tape recorders. Apparently the International Federation Of Soundhunters and the contest still exists. A cool little subculture even more obscure than record collecting.

es a mixture of sound excerpts made by various winners of the contest. Thankfully the only full track here is also the only one that is interesting to pop music fans. Beat´n heart was also featured on volume 4 of  Prae-Kraut Pandemonium, the most essential LP compilation series of obscure German Beat music. Since it was becoming too expensive   to continue putting out vinyl, it´s been released for free via some handy Zip files on the Spurensicherung blog. You can download the two latest volumes  here and here.

I didn´t know what was on the record and just bought  it because it looked interesting. What a surprise when I found this little gem! Beat´n heart is clearly influenced by Joe Meek. Only this recording was all done by Ronald Patrick Guttridge himself, a British travelling salesman as the insert states, with the use of a reel to reel tape recorder.  As you can guess, it´s him playing guitar and drums mixed  with the sound of a beating heart. The insert even speculates on the real hit potential. Obviously it didn´t make it.