For some reason I´ve been “collecting” these Delta-Ton flexi-dics over the past.  I liked the first Delta release that I found , so I picked up another one the next time I came across it.  Collecting flexi-discs is a little embarrassing, because the majority of them are promotional items. It´s like collecting stamps. Apart from small group of like-minded weirdos, nobody seems to care for these wobbly little things. Luckily at least the music on these Delta-Ton flexi-discs has never been re-released, which makes it excellent copyright-friendly material for this blog.

In the 1950s small independent record labels like the Delta-Ton Label out of Düsseldorf were trying to undercut the booming record business by selling their records cheaper than the average four Deutschmark.  Flexible records would be sold at newsstands for something like one Deutschmark. Cheapo labels mostly released  versions of hit songs recorded by no-name artists. But sometimes they did actually release original material, like in the case of Kid Orbis.

The name Kid Orbis can be found on quite a few cheapo releases on various German labels like Delta-Ton, Opera, Tip Top and Universumin. Likely chosen to sound like legendary jazz trombonist Kid Ory,  the man behind the pseudonym Kid Orbis was actually Wolfgang “Wolf”  Gabbe. According to Wikipedia Wolf Gabbe, born April 28, 1924 in Berlin, first worked as an auto-mechanic before taking evening classes to become a drummer. After 1945 he started to play in swing and dance bands and made his first recording for the East-German Amiga label in 1948. Gabbe´s “Radio-Star-Band” remained a fixture in Berlin into the 60s. By the way, you might want to check out another Wolf Gabbe advertisement record that I posted some years ago here: “Hully-Gully-TÖFF-TÖFF” released in 1961 on the local Rondo-Exquisit label.

Now maybe my taste is a little messed-up from listening to too many of these records, but I think Kid Orbis two takes on Tchaikovsky´s Nutcracker are kinda cool. I like  the arrangement and there is some nice guitar work thrown in.

As well as some ticks and hisses…

To cash in on Chris Barber´s hit record on the Pye label, Delta-Ton coupled the same two songs together. Petite Fleur, originally recorded by Sidney Bechet in Paris in 1952, was covered by Chris Barber three years later. After initially failing to chart, Pye released the record again in 1959. Although Chris Barber´s version lacked the intensity and passion of Sidney Bechet´s original it sold more than one million records in the US and ten million copies word wide.  Wild Cat Blues was written by Fats Waller and Clarence Williams in 1923.

Now who is Sammy Zabanzaff ? 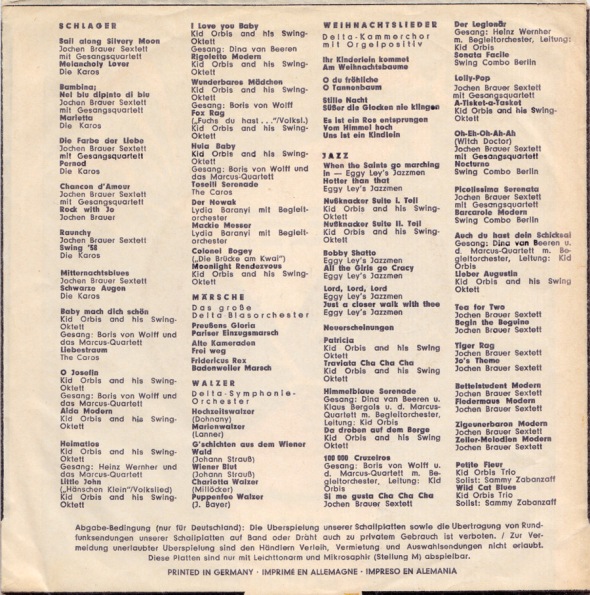 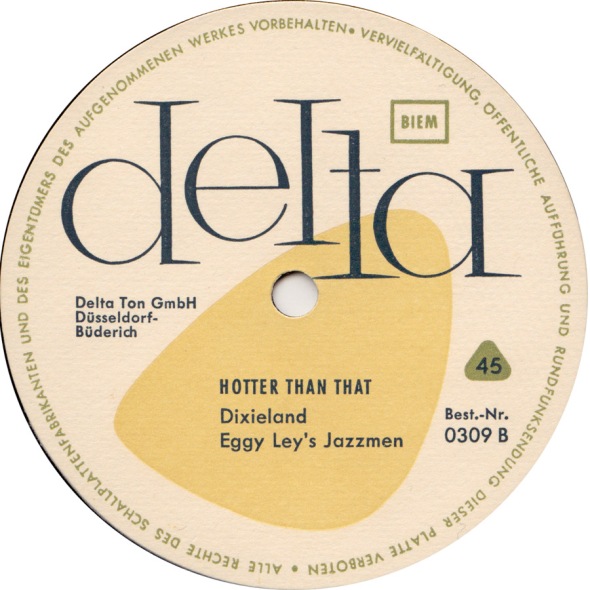 Eggy Ley, born in London in 1928, was one of the pioneers of classic soprano saxophone in England. From 1955 to 1961  Eggy Ley and his Jazzmen toured extensively in Germany and recorded for Columbia, Sonet and Brunswick. After returning to London he joined Radio Luxembourg in the 1960s before producing for BFBS in the 70s.  From 1983 leading his own Hot Shots, Ley turned professional again, ran a small jazz magazine “Jazzin’ Around” and successfully recorded and toured abroad. He later moved to Vancouver, Canada where he died following a stroke in 1995.

Somehow Eggy Ley´s cover versions of these two Louis Armstrong classics from the 1920s even appeared on the cheapo Delta-Ton flexi-disc label out of Düsseldorf.

EGGY LEY´S JAZZMEN, When The Saints Go Marching in, 1958

Joachim “Jochen” Brauer  , born 1929, started playing jazz in the late 40s in East-Germany, among them the band of Kurt Henkels. After relocating to Western-Germany in the mid 50s he recorded some cool jazz for Brunswick. Like Wolf Gabbe and many other German jazz musicians, he took to the pop market after it got more difficult to find work playing jazz in Germany. Bear Family Records has re-released his schlager/jazz material on the CD “Das Jochen Brauer Quartett – Great Music, Great Memories” (1957-1965).

These two recordings made for the Delta-Ton label show Jochen Brauer´s early attempts at mixing jazz with pop.