The small indies Anitrola, Amulett, Carina and Linda out of Frankfurt all belonged to the same family of labels. Fats and his Cats recorded some rock´n´roll on Linda and Laya Raki did her suggestive twist “Oh Johnny hier nicht parken” on Carina.

This dixieland version of  the lullaby  “Schlaf Kindchen schlaf ” went to number 30 in the German charts but soon faded into oblivion.  So far nobody cared to re-release it in 50 years…

Fritz Trippel was a Swiss jazz pianist. This EP was recorded August 28, 1960 in Stuttgart  with Rolf Cizmek on bass and Henry Owen on drums. 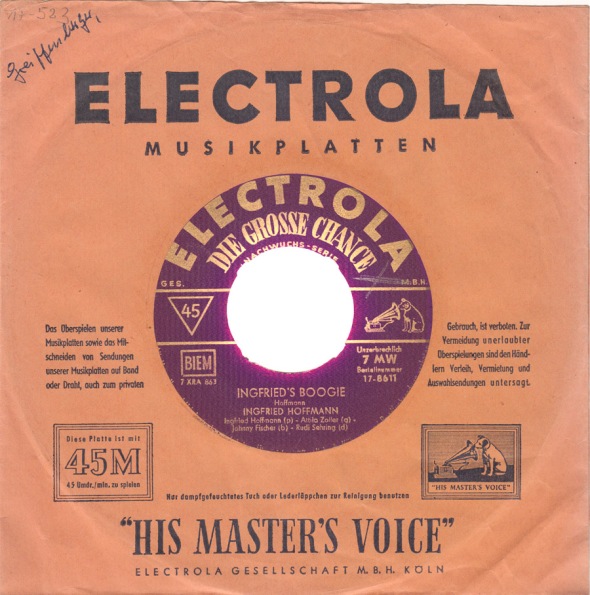 I bought this in a thrift store  recently. It wasn´t possible to listen to the record in the store but “boogie” sounded interesting enough to spend one Euro on it. I really like these two boogie tunes. With repeated listening I have the feeling that they do stand out in the field of German jazz and rock´n´roll recordings in the 1950s. At least I can´t think of any other record that bridges the gap between those two styles better than this one does. I guess a big part of it was then 20 year old Ingfried. As the label states this release was a special “new talents series” (Nachwuchs-Serie) so he must have jumped at the chance to record one of his own songs for his first record. Back then most other young artists in the pop business had to record the material they were given. While I do enjoy the period charm of  records made by the likes of Ted Herold, Paul Würges and Ralf Bendix, their music was schlager first and rock´n´roll second. In contrast these two instrumentals come much closer to the rhythm & blues roots of rock´n´roll. For some reason they have never been re-released, probably because they are so singular. With what to pair them with?

Hoffmanns version of  Rimsky-Korsakov´s “Flight Of The Bumble Bee” predates the 1959 hit for B.Bumble & the Stingers ( Earl Palmer, René Hall and Plas Johnson) and is cleary inspired by the lightning-fast 1946 swing arrangemet of Freddy Martin and his Orchestra.

Also I  already have another great record by Ingfried Hoffmann,   “Hammond Organ” on the Czech Supraphon labeI. The two Songs “TV-Swing” and “Soul Twist”, recorded in Hamburg in 1963, are great modern Jazz with a pop  twist. They have been re-released in 2007 on the “Hammond Bond – Jazz For Secret Agents” CD. In the 1960s Ingfried Hoffman went on to play with Klaus Doldinger and became of the most prestigious European jazz pianists. In 1970 Hoffman quit performing altogether to focus on composing and arranging. One of his most famous melodies, at least to the german audience, is the title track to the german Sesame Street. 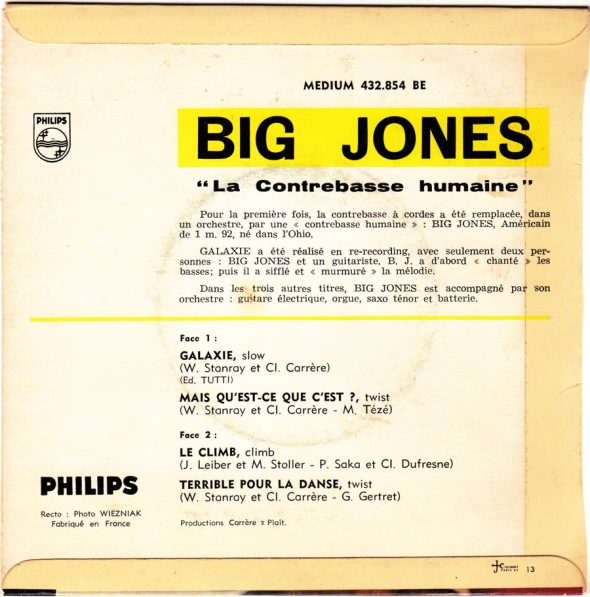 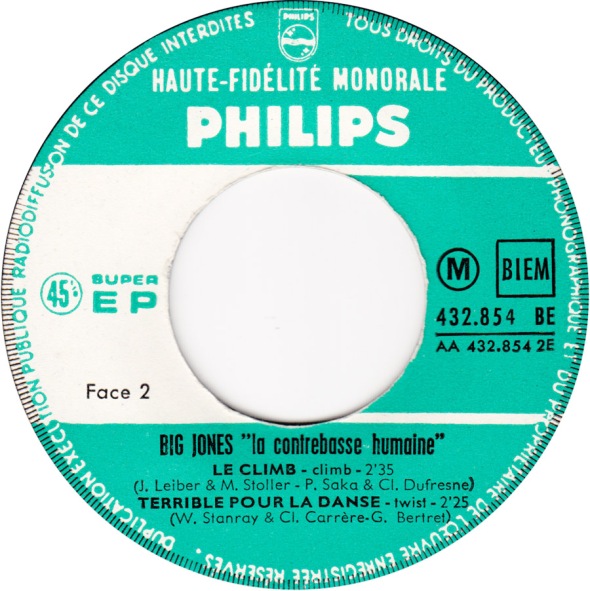 One Sunday morning a couple of weeks ago my friend Franky picked me up with his car and took us to a record convention. I hadn´t been to one of those for a long time and I have to say I was a bit disappointed. It was poorly attended and apparantly only by old men.That had never bothered me before. I went to my first record swap meet in 1980, when I was a fourteen year old rockabilly, accompanied by my dad, who was very patient with me. The event had been recommended by the radio DJ Werner Voss on his weekly show “Werner Voss Rock´n´Roll museum”, that was always aired right after school. That first time I bought some nice 45s like “Heat/Nameless”, two great blasting saxophone instrumentals by the Rockin Rs on Tempus, or a pounding version of “In The Mood” by the Hawk (Jerry Lee Lewis) on the Phillips International label, of some vendors that seemed unbelievably old to me then, but were probably younger than I am today. Back then, before the Internet and Ebay, record conventions were the only place to find rare records. Also, vinyl was still the most popular medium, so a lot of different people, from jazz to schlager fans, went there to find something. This time I had a feeling the whole business was on the way down. Most of the stuff that is being sold is pop and rock vinyl LPs from the 60s to the 80s – the short period the collectors grew up in. No 78s, no electronic music or hip hop vinyl and only few  CDs. Even Jazz collectors don´t seem to look for vinyl any more. When I asked for Jazz,  a vendor told me: “Ah, I left that box at home!”

We still had a nice sunday morning at the swap meet and both came home with a bunch of cool stuff. From a french seller I bought this mysterious EP. “The Climb” was written by Leiber and Stoller for the Coasters, who first recorded it in 1962. Like a lot of the Coasters stuff it is a slow grinding R&B number with great vocal harmonies. In 1963 Duane Eddy recorded a instrumental version. In 1964 “The Climb” appeared again in “Viva Las Vegas” this time performed by the Forte Four, a gospel quartet led by George McFadden

In France at least eight different versions of “Le Climb” were released. The only information I could find about Big Jones, is from the back of the sleeve: 6.2 ft tall and born in Ohio. “Galaxie” was the biggest hit for “Les guitares du diable” a french instrumental band made up of studio musicians led by jazz guitarist Léo Petit (a.k.a William Stanray). The two other crazy twist songs on this EP are also penned by Stanray, so I guess this was one of his many projects in the early 60s. 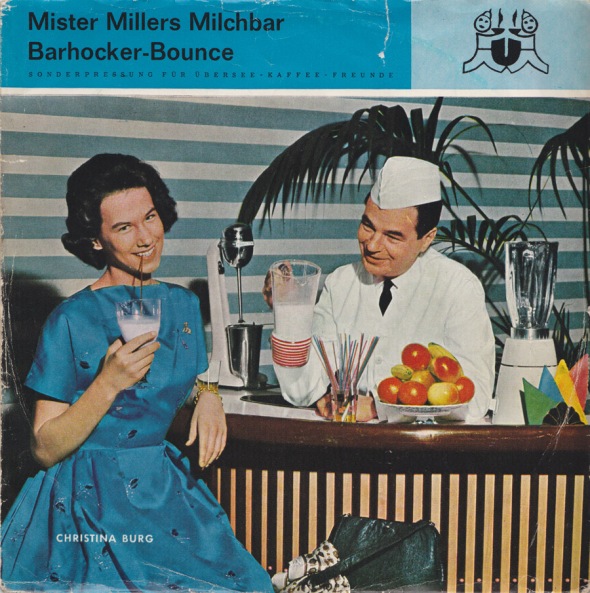 “What are you doing, hacking away on that keyboard?”, my girlfriend asked irritated while I was writing this. “You´re not doing your blog again, are you?” My girlfriend always thought my blogging was just a huge waste of time. And she is right. Today it took me a couple of hours to do this little post, because I forgot how all the features work. Ridiculous how long it took. It was one of the reasons why I stopped blogging almost a year ago. I was addicted to “putting stuff from the real world into the digital world”, or at least that´s how I used to justify my activity, but then I never really had any use for the digital myself. I still don´t listen to MP3s, I don´t own CDs and I don´t buy anything on the Internet. Especially not on Ebay. I like buying real records and if I ever had a message behind this blog, it was to encourage people to go out and buy records. It´s easy. I do it every week. Another reason for my absence was that my computer collapsed. Luckily a friend gave me his old one but it is really loud and slow and most of the keys on the keyboard don´t work properly so it takes twice as long to write. It´s just not fun doing a music blog like this.

The biggest reason for my hiatus was that my girlfriend and me started swing dancing, a very worldly activity and a very social one. I met a lot of nice people in the swing scene but the best thing of it is, that of all the other musical sub-cultures that I was involved in since the early eighties, the swing dancing scene is the only one dominated by women. I love it and sure felt more like spending my spare time with my girlfriend and her friends, instead of the computer.

Swing dancing also opened up a huge new field of music for me. For the past year I´ve been buying quite a few jazz records and also found some pretty odd 45s that have never been re-released.

Like this advertisement record for Übersee-Kaffee. Christina Burg also did “Übersee-Kaffe-Rumba” and I have another one of her 45s on the Souvenir label: “Ich freu mich immer so, wenn Ferien sind”. In “Mister Millers Milchbar” Christina sings abut milk instead of coffee. “Barhocker-Bounce” (bar stool bounce) is 1950s big-band swing but listen to the bottle pop and the glasses klank…