Jazz vs. Rock and Roll 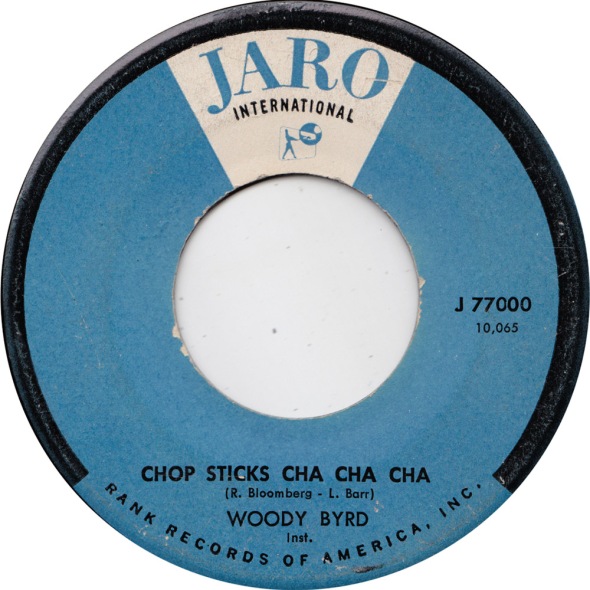 Found this crazy 45 in the cheapo bin of a local second-hand record store last week, for one measly Euro. No idea how it ended up there, but it sure is a killer.

Issued by the Jaro label in 1959, at the hight of the Beatnik-craze, this was Woody Byrd´s sole 45. Jaro was a subsidiary of Top Rank International. This seems to be the label´s first release. Both sides were also issued on Top Rank in New Zealand. Jazz vs. Rock and Roll would have fit perfectly on the Welcome to the Beat Generation – comp that came out in the late 90s. Despite its cool combination of jive talk, swingin´ jazz music and rock´n´roll guitars, the song has never been re-released. At least I couldn´t find it. Maybe it´s too much of a real novelty break-in record, to be of interest to rock´n´roll fans. Much less jazz fans.

Or maybe it´s just too silly…

The title of the flip is a bit misleading. Chop Sticks Cha Cha Cha  is a latin-tinged Rhythm & Blues tune with a cool saxophone solo…

I´d be coolin´Jazz on my Christmas set/ …/ Then she tuned in some crazy quartet!/ …/

We were so confused, we didn´t know what to do/ So we just decided, that they both would do/

And now we get our kicks today,/ whenever we hear that cool cat say:/

Found this flexi-disc last week, while on a trip to Tbilisi, Georgia, together with the staff of Jungle World. Our special Georgia issue hit the newsstands today. I turned out great! Thanks Jungle World for always taking me with you.

I bought about twenty Russian flexi-discs at Dry Bridge fleamarket, but only got to hear them when I came back home to Berlin. Imagine my surprise, when I suddenly heard a German voice on this record…

Apparently, this was a souvenir record geared at German visitors to Georgia in the 1970s. I think there is also a English version of it. The very thin blue russian Melodija Flexi has two songs. The first is by Georgian vocal instrumental ensemble Orera. Along with Dielo, Orera were the most famous pop groups of Georgia during the Soviet era. I guess the vocalist is Nani Brevadze. I have no clue yet, who performs the second song or what the name of the song is. 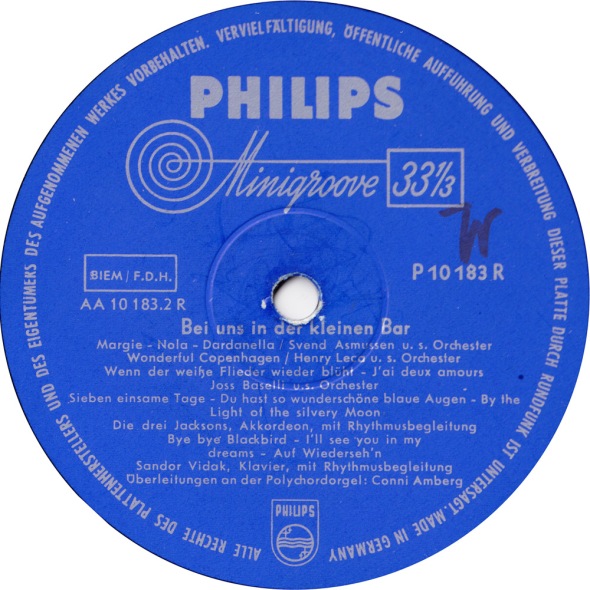 I´ve loved the drawing style of Hans Jürgen Press since I was a child, so I recognized it immediately when I saw the album cover of this 10″. The clear, slightly broken lines, the big noses and the light-hearted humor are typical for this outstanding German artist. Probably because it was not directed towards children, the design is not as overcrowded with detail as his usual work. There is a well hidden small signature in the far upper right corner. Just as well hidden as the clues that Press was known for placing in his picture puzzles in The Adventures Of The Black Hand Gang.

The album is a showcase of the Philips label  instrumental pop catalog, ca. 1955, in combination with a  “bar” concept: added background noise, chatter, clapping, glasses clanking, interrupted by the Polychord organ of Conni Amberg. It´s like a radio play without the speakers – you hear only the background sounds.

My favorite track is a medley of Margie, Nola and  Dardanella by Svend Asmussen and his orchestra. Danish jazz violinist Svend Asmussen died last year at the age of 100. In the 50s, Asmussen was influenced by the violinist Stuff Smith, but this medley sounds more like the guitar wizardry of Les Paul…

I like this version with the added clapping better than the original version. You can listen and compare it here.

Initially, I didn´t want to post the whole album, because I thought it was boring. Then, after listened to it for a while, I found it to be strangely soothing. I guess, I´m into elevator music now… 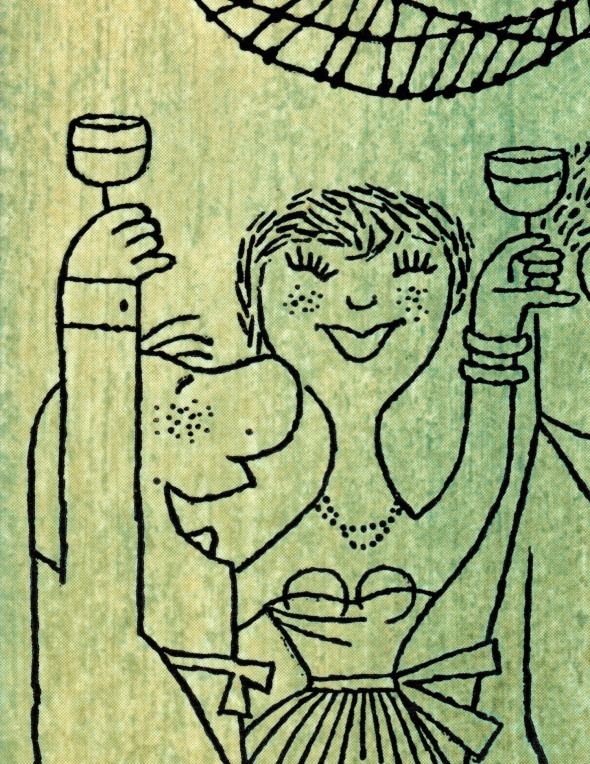 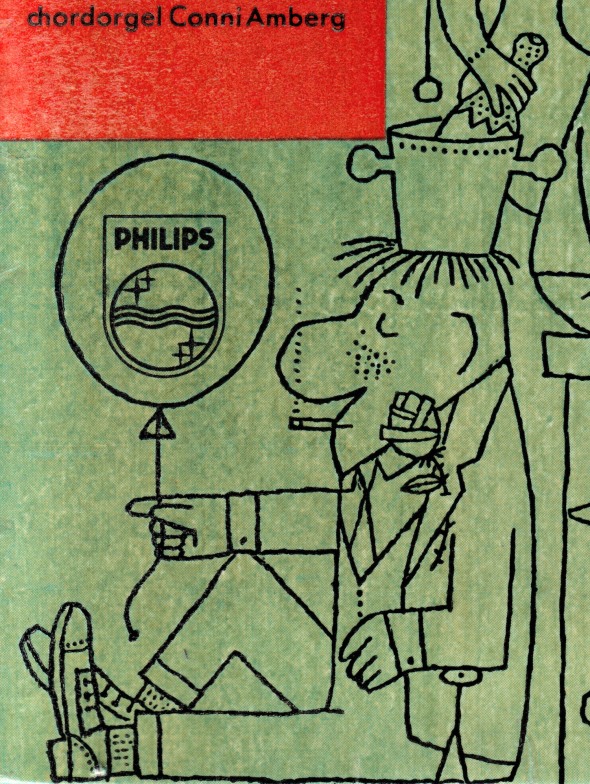 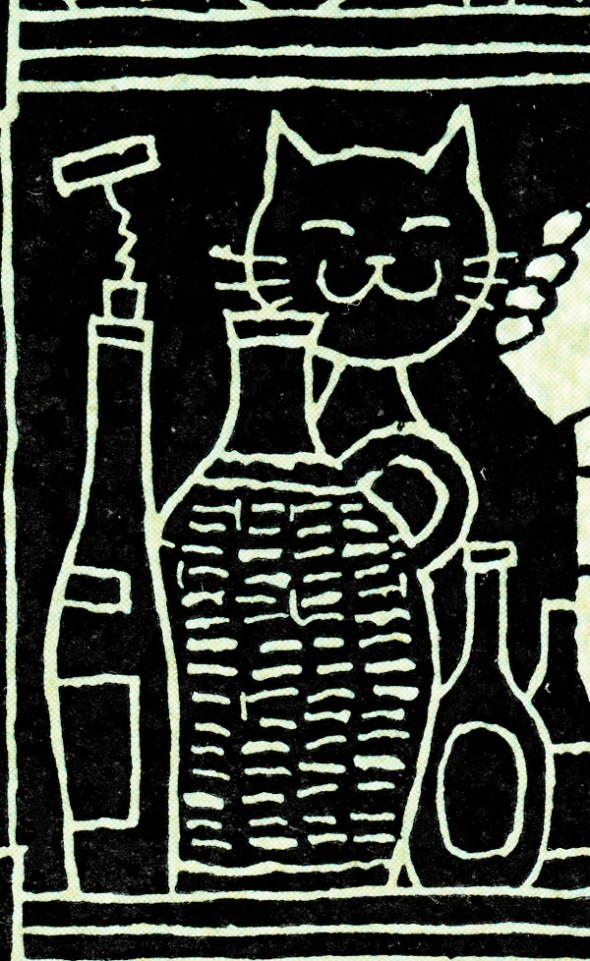 Two weeks ago, I found this record at a Berlin record convention. This promotional flexi-disc for the Berlin tobacco company of Otto Boenicke fits the framework of Berlin Beatet Bestes perfectly. The front side of the record was illustrated by Helmut Nickel. Nickel, an outstanding stylist in the German post-war adventure comic genre, was known for his instantly recognizable black and white pen work. This gouache style illustration shows, he was very good with color, too.

Born March 24, 1924 in Dresden, Helmut Nickel fought in WW II, was a prisoner of war for three years and left East-Germany for West-Berlin in 1948. To finance University, Nickel started illustrating various comics series in 1952. From 1952 to 1964 he worked on a whole series of comics, such as Robinson,  Hot Jerry, Titanus, Die 3 Musketiere, Der Graf von Monte Christo and Peter’s seltsame Reisen.

Informed by his studies, Nickel´s comics were educational, at a time when comics were still regarded as trash that was subverting the children. After finishing University in 1959, Nickel worked in a Berlin museum and then applied for a job at the New York Metropolitan Museum as a curator of the historical weapons collection. He stayed there until his retirement in 1989. Today he lives in Florida.

In 2011 Helmut Nickel was honored with a lifetime achievement award at the Munich Comic Festival. Yesterday, Helmut Nickel turned 94.

Boenicke-Rumba  (The song doesn´t have a title. I just called it that.)

Like many flexi discs that I´ve posted over the years this was also published by the Phonocolor company of Berlin-Lichterfelde. Phonocolor also issued the Okay Exquisit, Rondo and Topas labels.

While the Rumba-side runs at 45 rpm, the side with the cigar smoking middle-aged gentlemen runs at 33 rpm. Compared to the comissioned front, this looks like a stock illustration. The male and female narrators sound like Berlin cabaret Die Stachelschweine. Five jokes interrupted by some boogie woogie piano. Kenn´ Se den?  Have you heard this one? … 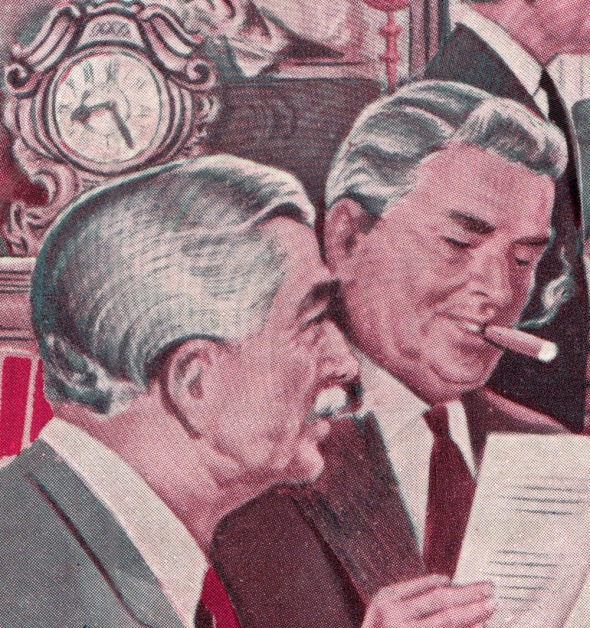 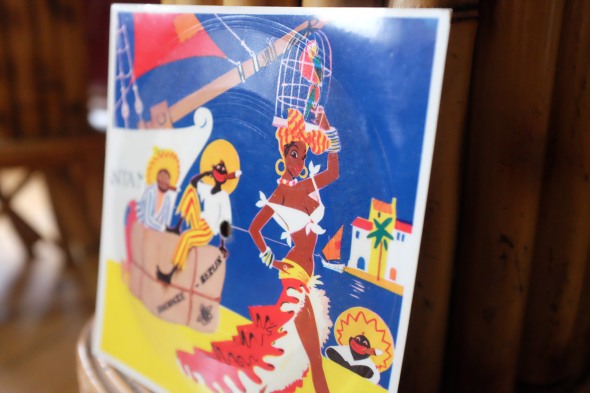 A mystery Christmas record for Christmas. This one-sided 45 has riddle written all over it. Who made them? Why two Christmas Records? Why Harold M. Kirchstein? Help me solve the riddle.

I bought these two very similar 45s, credited to a Harold M. Kirchstein, at a local second-hand record store. Both have white labels, are hand-decorated with Victorian die-cut Santa Clauses and wrapped in plain paper sleeves. The one with the small hole has the words  Liebe Weihnachtsgrüsse, Harold M. Kirchstein and the speed 33 1/3 written in red marker. The other one with the large hole says Frohe Weihnachtsgrüsse, plus the name and the same 33 1/3 speed. The first thing you´ll find is the name. Harold M. Kirchstein (1906 -1993) was better known in the world of popular music as Henri René. I own a few of René´s 45s backing Eartha Kitt.

But it´s not Harold M. Kirchstein or Henri René  that is heard on these records. These elaborate Christmas joke records were made by a smart and sophisticated person not so long ago. The small hole 45 even has Henri René written in the outer grooves, plus I – m – re – I. Further the small hole 45 cites the swingin´ Ach, verzeih’n sie meine Dame, Gottlieb Schulze mein Name, a song written by Harold M. Kirchstein and recorded in 1936 by Peter Igelhoff. The lyrics also mention Die Goldene Sieben, one of the top German swingin´ orchestra in the 1930s, co-founded by Kirchstein. Harold M. Kirchstein left Germany in 1937. The whole record musically hints at the German-American story of Henri René. A story that has not been told in full yet. Let´s hear:

THE COUNTRY PICKERS, Springtime in September 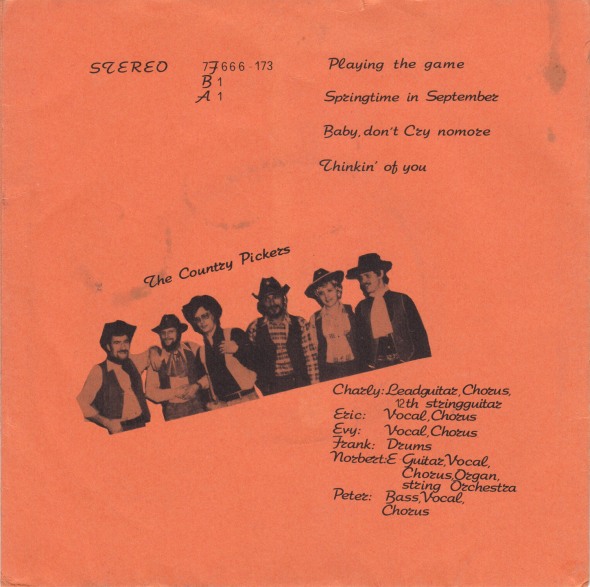 One last Berlin country & western record in this series. No information available online about the County Pickers. I´d put their privately pressed “Take One – Stereo EP” – a  DIY production with hand-made sleeves – in the early 80s. But who knows. This seems to be the first public appearance of the group on the Internet.

I especially love the strangely endearing Springtime in September…

THE COUNTRY PICKERS, Springtime in September

THE COUNTRY PICKERS, Playing the game

THE COUNTRY PICKERS, Thinkin´ of you 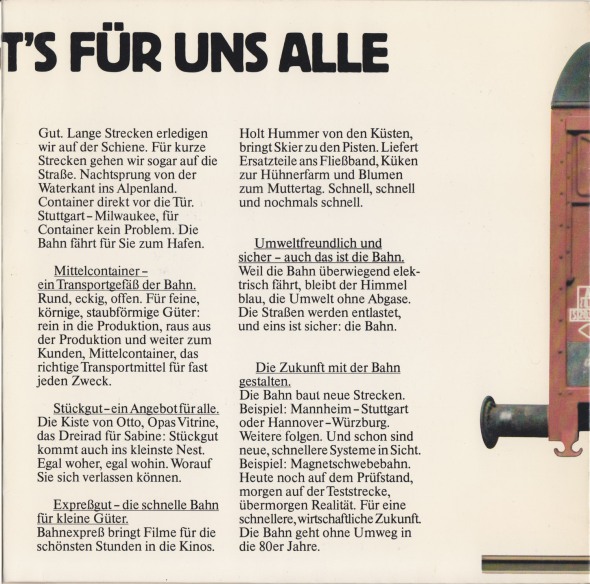 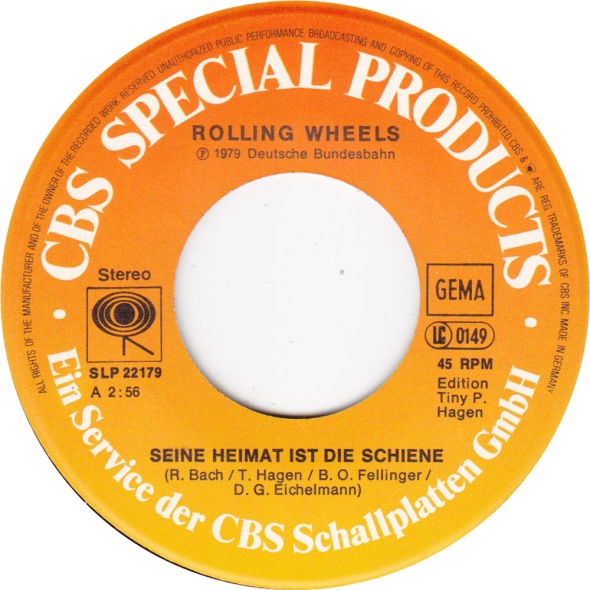 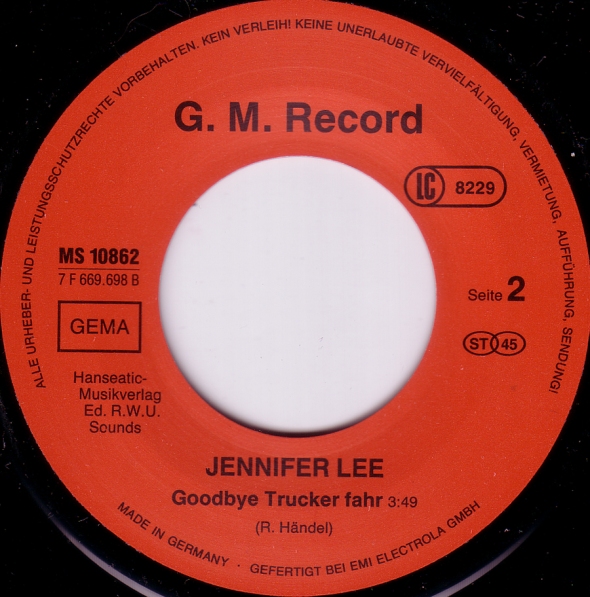 A mystery country & western 45 from Berlin. No idea what year it was released and I couldn´t find any information or image of Jennifer Lee. What I do know, is that both songs were written by Ruth Händel. Ruth Händel had a local hit record (written in part by Drafi Deutscher), the novely song Meine letzte Zigarette . My last cigarette, cough, cough…

According to the German web forum of Memory Radio, Ruth Händel, born Heidemarie Gerbsch, performed together with German C&W stars Western Union and co-founded the German band Country Child, prior to her solo career  in the 70s. Ruth Händel died in 2003.

Jennifer Lee recorded at least one more 45 on her own G.M. label, Samstag Nacht/ The Simple Words Of Love. The lyrics to Country Songs pretty much pin her down as a fan and an amateur singer. In the best way:

“I only like bars that play country and western music/ When AFN´s Country Time is on the air, / I invite all country fans to my place/ I´m not singing like Big Hank Snow or Dave Dudley/ Country songs – just for fun/ Country songs – bye bye so long/ I´ll go see live music and will never pass on a record store/ And one day I´ll move to Nashville,/ but meanwhile I´ll make country western in Berlin”

Trucker fahr is about truckers going to Africa to save children…

An unrelated artifact from my personal collection: matchbook for NASHVILLE SALOON, a country and western bar at Kadettenweg 63 in Berlin-Lichterfelde. Although not related, this place fits roughly in the same time frame with Jennifer Lee. Like Jennifer Lee, there´s no trace of the Berlin Nashville Saloon today.. 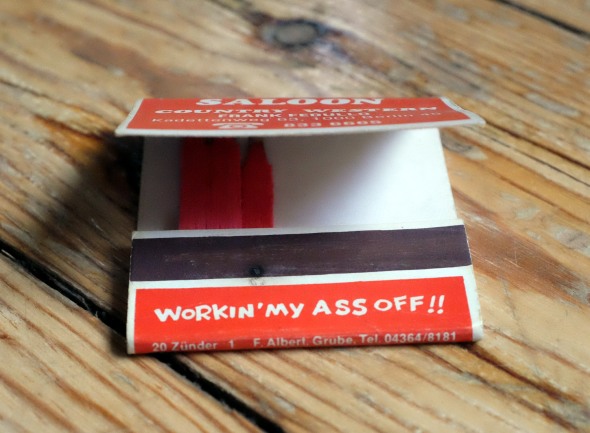