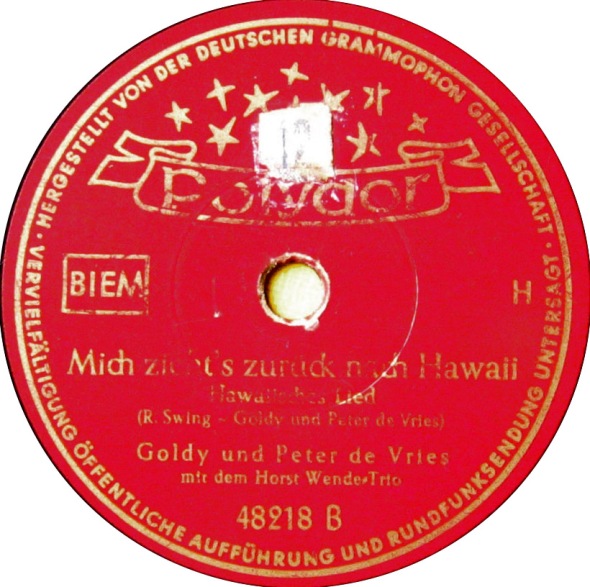 I love this song! It´s schmaltzy and it is a little irritating when they sing about “das schöne Hula-Mädchen mit dem  rabenschwarzen Haar” (the pretty hula girl with the pitch black hair), but compared to the majority of German  Hawaiian music, this doesn´t sound so damn German.  Because it isn´t. The Dutch duo Goldy and Peter de Vries, backed by the  Horst Wende Trio, recorded in the ruins of Hamburg.

This is a 78rpm record that I bought two weeks ago in a local Berlin thrift store for 50 cents….

Peter de Vries is mentioned in this 1951 article about some Kids in cowboy gear posing in the ruins near the Cologne Cathedral. Apparently he was quite famous for his cowboy songs in the early 50s. 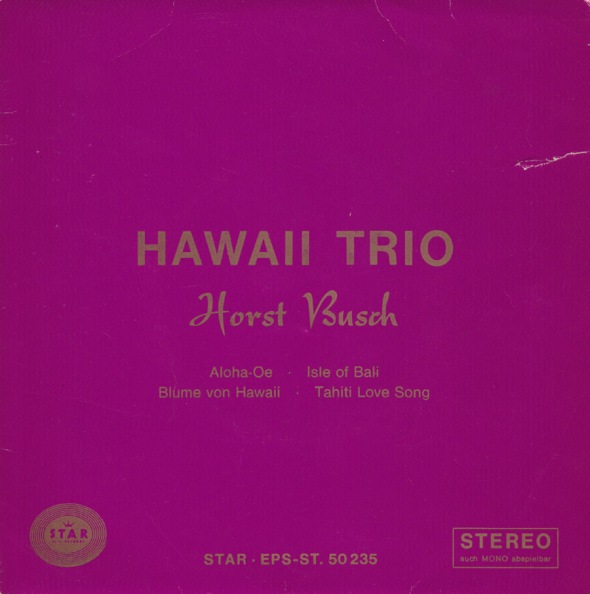 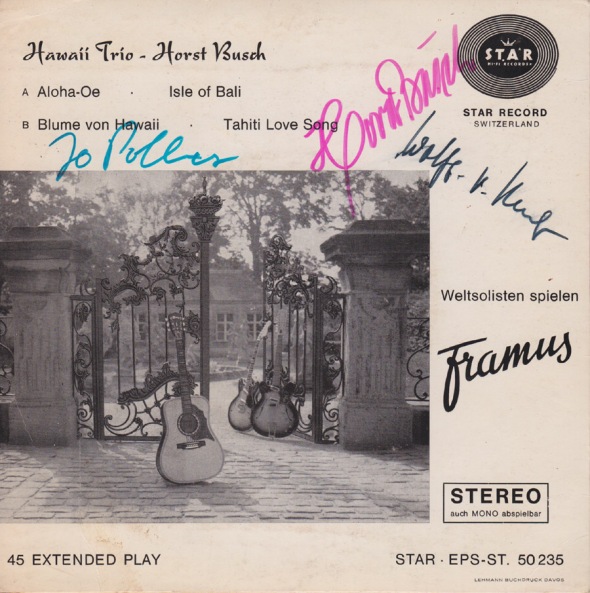 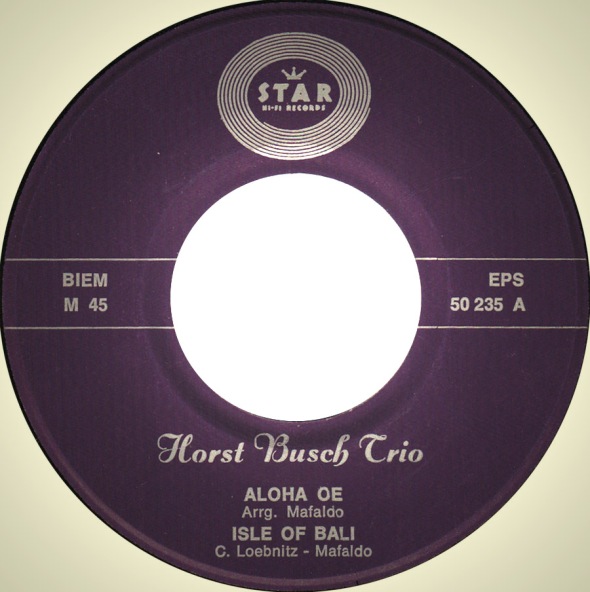 Another record I bought in Zurich in August at a Brocki for 50 Rappen, about 40 Cents. In the early 60´s Hawaiian music was popular all over the world, even in Switzerland. The Horst Busch Trio played  German Framus guitars, at one time the biggest guitar producer in Europe. Besides that I couldn´t find anything about this group at all… 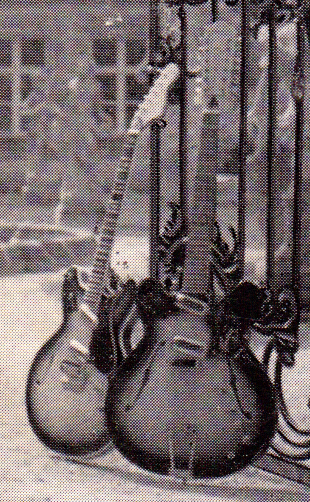 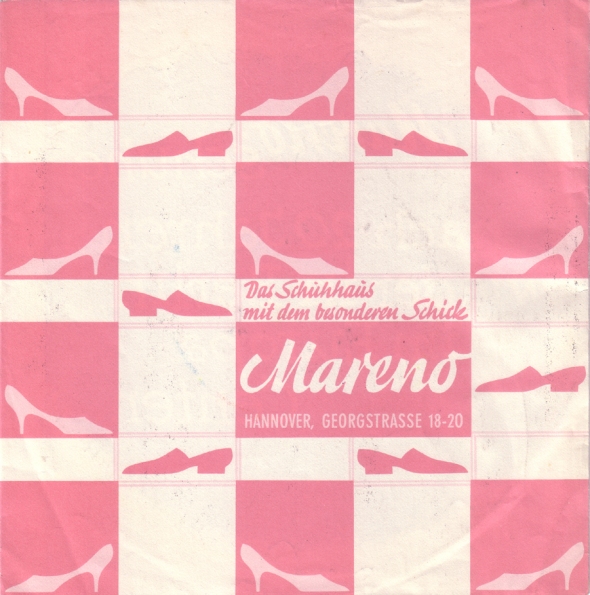 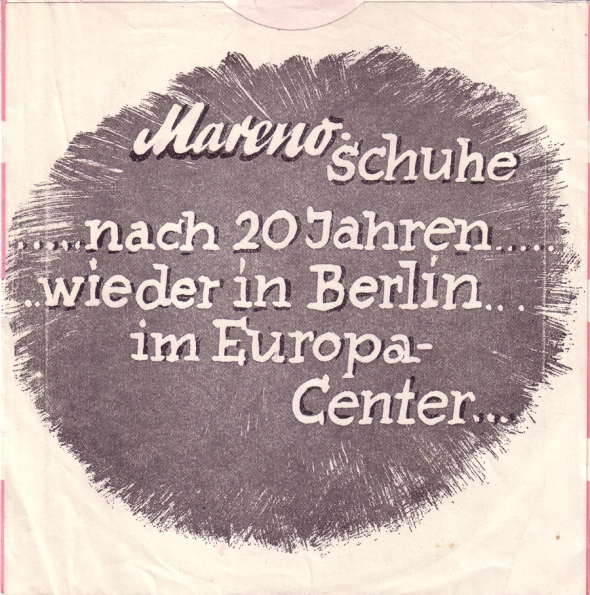 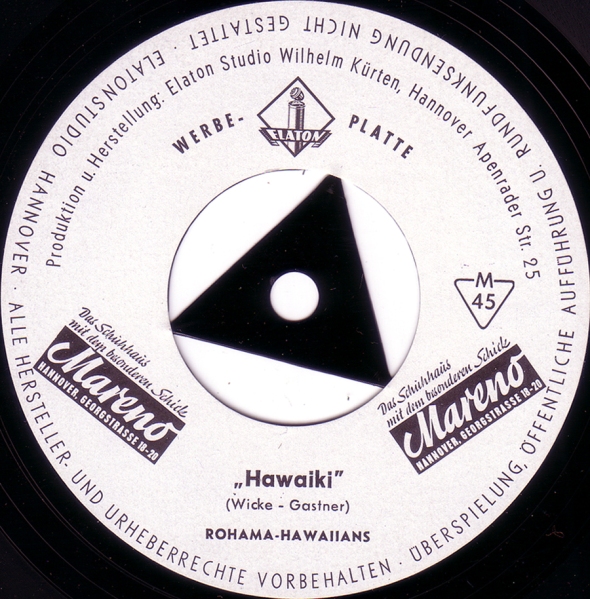 Before I bought the stack of records I noticed that inside this sleeve five other Flexi-discs were hidden. I showed the seller and he replied: “Well, if they´re in there” and let me have them all for 1 Euro. I love my little flea-market.

Fellow record collector Stefan recently sent in a few very good high-resolution scans of some Persil and Phonocolor Flexi-disc sleeves that  I was missing here and here. Thanks Stefan! He seems to have quite a collection but is yet reluctant to start a own blog. I would sure like to see and listen to his records…

This flexible record was advertising for the Mareno shoe-shop in Hannover. As they proudly anounced on the back of the sleeve they had recently opened another store: after 20 years back in Berlin at the Europa-Center, that opened in April 1965. 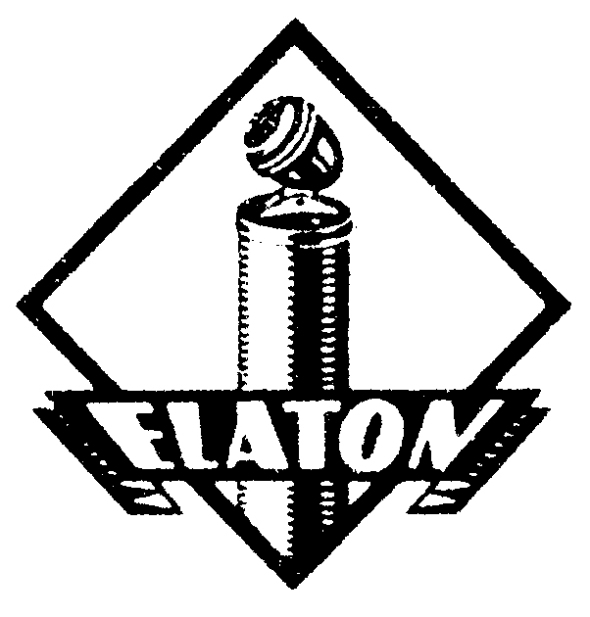 This is the logo of the company that made these Flexi discs. I was surprised to find out that the Elaton (like elastic-tone!)-Studio is still listed at the same address in Hannover that is written on the label.

Hawaiki is a Hawaian Swing song that starts with a airplane taking off and some nice in-between comments like: We will be landing in a few minutes, please fasten your seat-belts and stop smoking”. 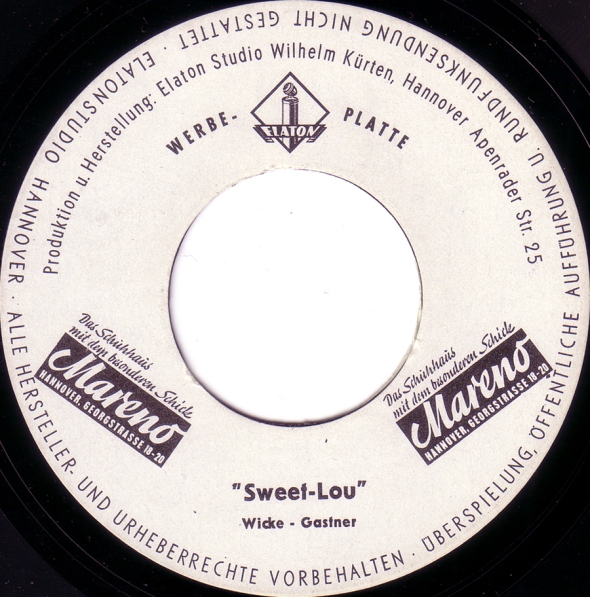 I already had an earlier one of these Mareno advertisement records. Sweet-Lou is another Hawaiian song but  a little more on the sweet side… 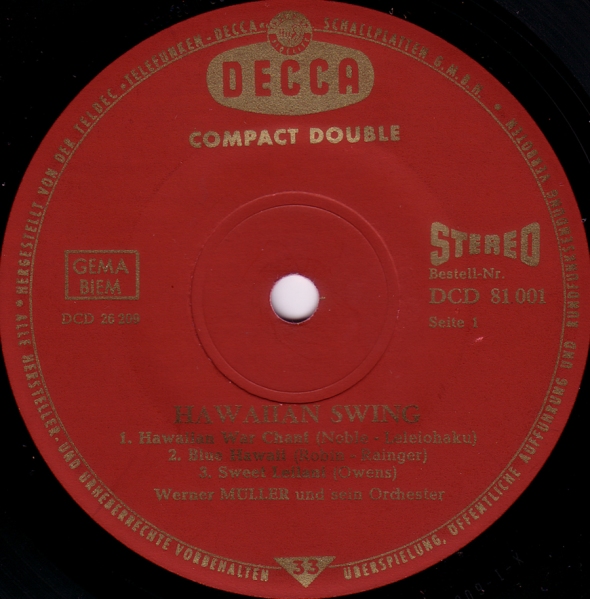 Werner Müller recorded a whole LP of the same title. “Hawaiian Swing” is quite similar to what Martin Denny was doing, but this exotica music was made right here in Berlin. This is a six-song EP. 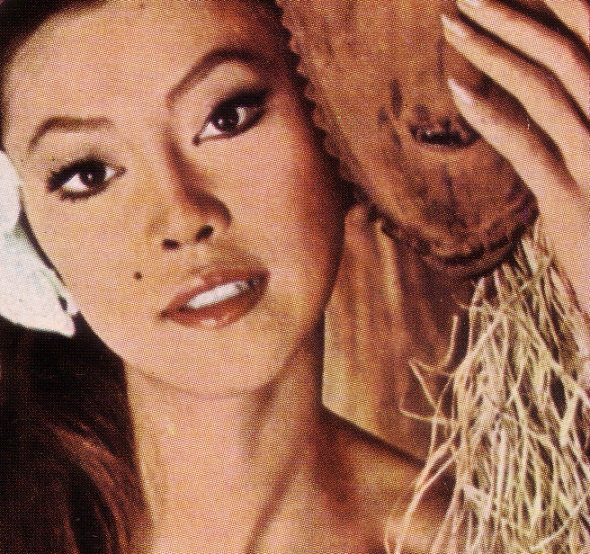 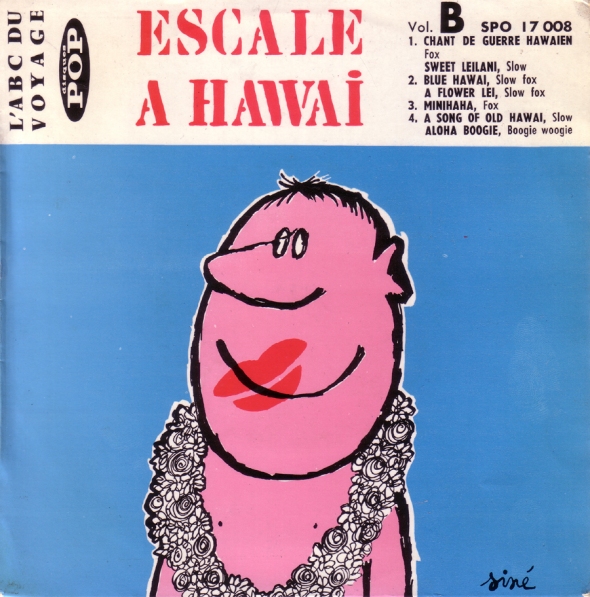 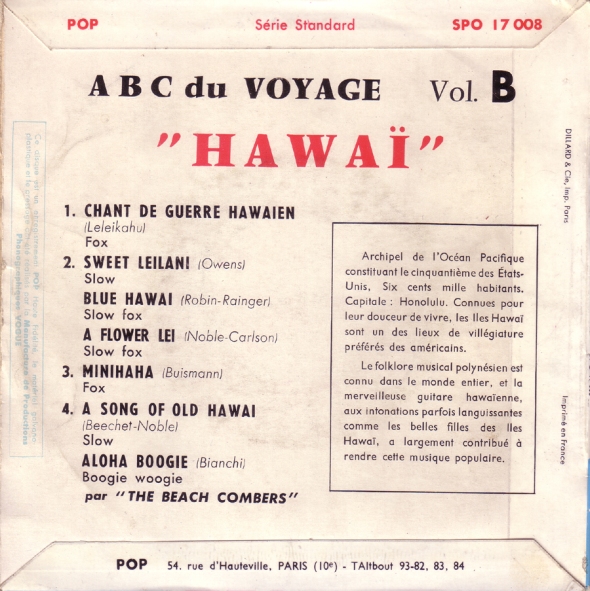 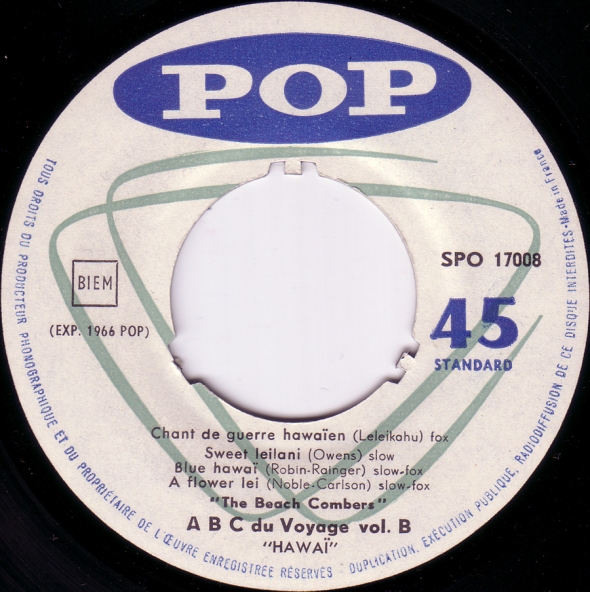 I pretty much wrote all I know about Sinè in the last post and I couldn`t find out  anything about the Beach Combers at all. I`m pretty sure they are not an authentic Hawaiian group, but more like a Hawaiian parody. This is funny music! Still the two Hawaiian-Swing standards “Minihaha” and the “Hawaiian War Chant”  sound solid and there is a nice steel-guitar on the slow songs. 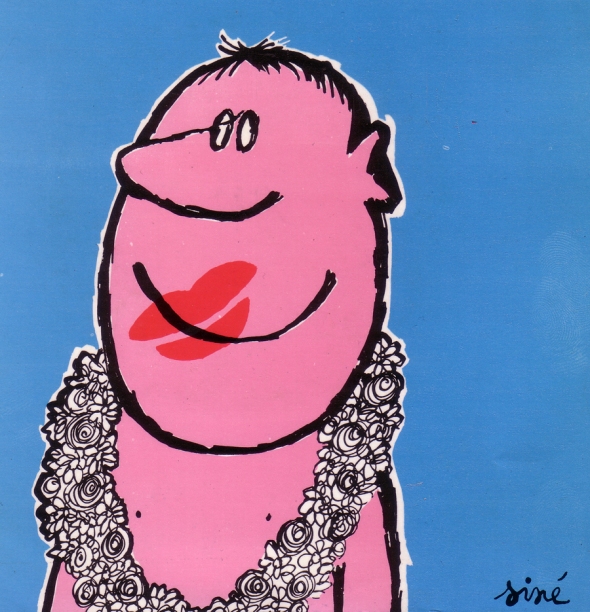 THE BEACH COMBERS, A song of old Hawaii – Aloha Boogie, 1961 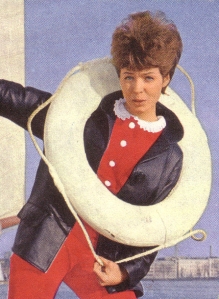 Initially I had the idea to answer that and checked wikipedia. That`s when I found out that Manuela had played in what was supposedly the first German all-girl band The Tahiti Tamourès.

It`s so cold and grey outside right now, why not go on a little trip to the warmer regions, at least musically. This Hawaiian music was made  right here in Berlin some 45 years ago. Manuela the lead singer grew up in the working class district of Wedding  and was discovered by Christian Bruhn and Will Meisel. The “Tahiti Tamourès” hit with “Wini Wini” in 1963. This was the follow-up record. 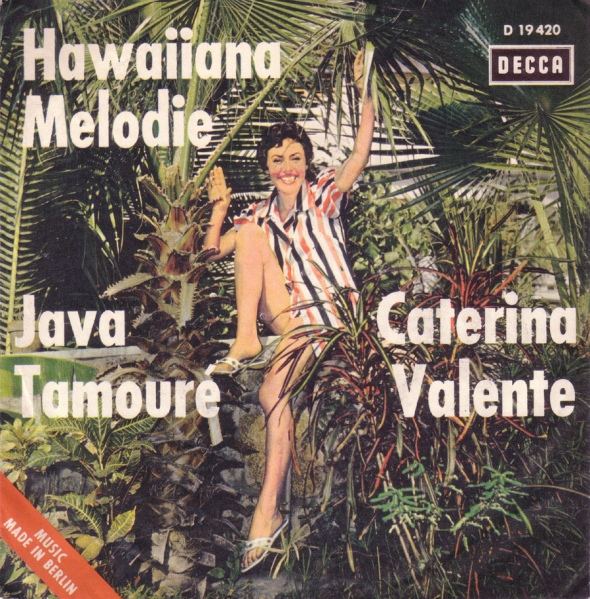 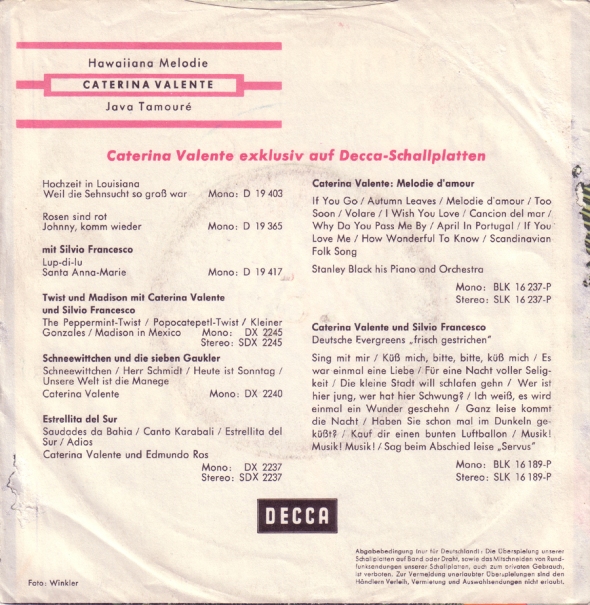 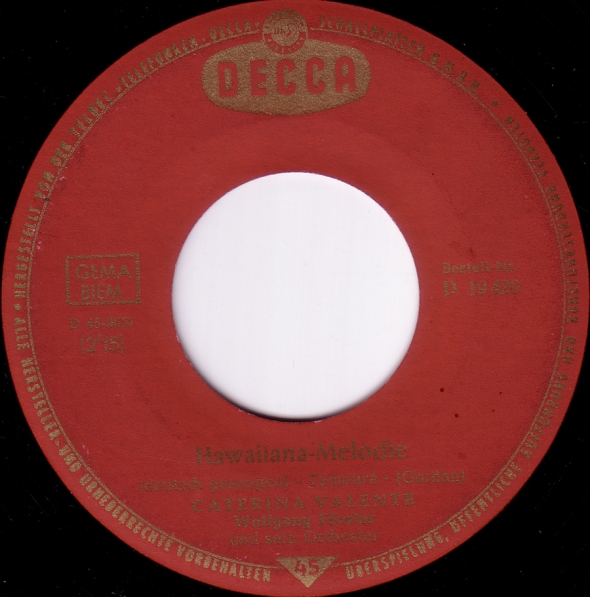 This Hawaiian record even had “Music made in Berlin” written on the sleeve.  Caterina Valente was the most popular artist in Germany in  the 50s and 60s. 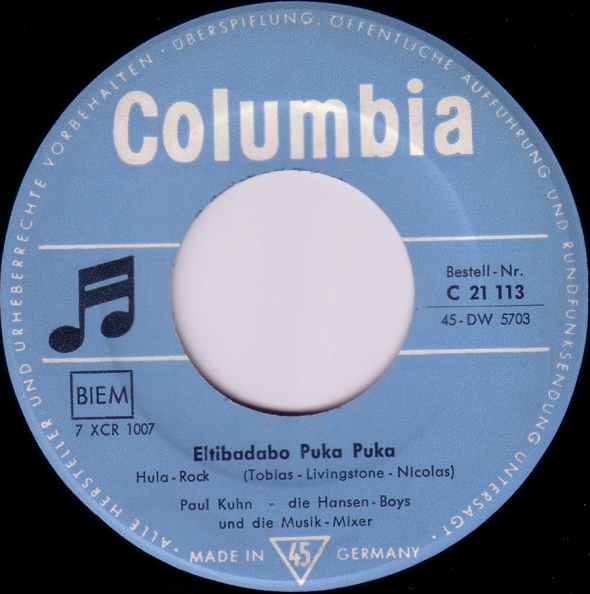 More Hawaiian music from Berlin. Paul Kuhn wasn`t  born in Berlin but he is a Berliner. He recorded some cool Rock`n`Roll records in the 50`s and had a long career in German Pop music. At 80 he is still playing Jazz today.