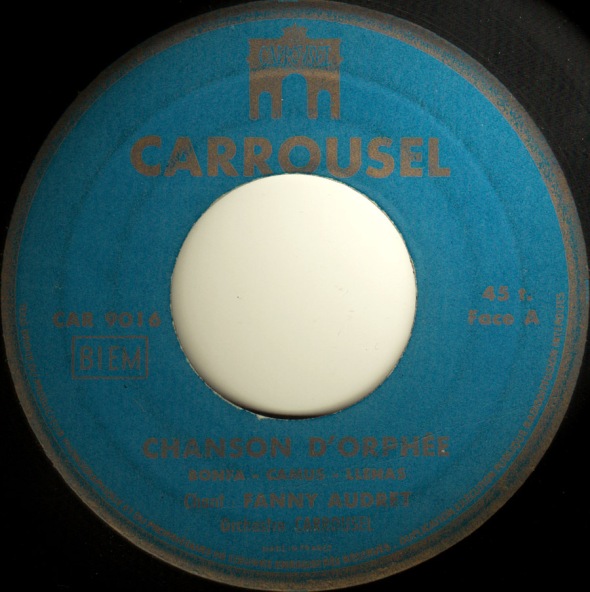 Back when I still lived in Hamburg I loved to shop in a little thrift store near my appartement called Hamburgs kleinstes Kaufhaus (Hamburg´s smallest department store). It was  very well-organized and also cheap, so many poor people from the neighborhood came to the store to buy household stuff like pots and  pans.  When I visited my old home the last time, I noticed that the original poor population has largely been driven out of the area. But the store still exists. It´s where I found this record in the early 90s.

I never knew much about it until recently, when I researched a bit. Nothing on Fanny Audret or the Carrousel label on the Internet but I found information about the songs.  Chanson d´Orphee is the title track to the film Orfeu Negro (Black Orpheus) made in Brazil by French director Marcel Camus in 1959. I had seen the movie and I even have the French soundtrack EP, but I still didn´t recognize the song. Probably because this version has a different tempo.

Le Train Bleu was a luxury French night express train  which carried wealthy and famous passengers between Calais and the French Riviera  in the 1920s and 30s. It was dubbed “The Blue Train” because of its dark blue sleeping cars.  Luis Mariano recorded Un train bleu dans la nuit in 1959 as a tribute to the train. Caterina Valente also recorded a version the same year. According to French Wikipedia Un train bleu dans la nuit is a version of  “Blue Train in the Night” by legendary Bebop double-bassist Ray Brown with French lyrics by Pierre Delanoë. But for some reason  I couldn´t  find a Ray Brown song called “Blue Train In The Night”. Anyway, it is a beautiful song:

As a side-note that would tie the two sides of this record together, here´s Ray Brown performing a bass solo of Black Orpheus in 2001:

Over the years I have more or less accidentally come accross each of these three releases of  the German Heliodor label. Heliodor was a  sub-label of Polydor that pressed smaller quantities of mostly US rock´n´roll releases. They were also sold cheaper than the regular Polydor record. At the time the label was especially popular among German rock´n´roll kids. This is a German Heliodor pressing of a record originally released by the small indedependent Moonglow label from Los Angeles.

Ray Maxwell, the founder of Moonglow Records , was born Rene Jan van Hoogten, brother of Alfred van Hoogten, the owner of the Belgian Ronnex label. Starting in 1951 Ronnex released many cool Jazz, Rock´n´Roll, Twist and Beat records. It was Alfred van Hoogten who discovered Jack Hammer and Corry Brokken.  Ray Maxwell was initially sent to the USA by his brother to set up a subsidiary of Ronnex but the label soon took on a life of its own. Maxwells´s biggest success was discovering the Righteous Brothers in 1963. A very interesting account of the early years at Ray Maxwell´s Moonglow label can be found at the blog of Rhythm & Blues legend Daddy Dewdrop. Ray Maxwell seems to have been an exceptionally cool guy for a record label owner. A record collector and musician himself, he recorded this pretty snappy version of Misirlou:

This is another Heliodor pressing of a small US independent label release. Originally published by the Philiadelphia based Chancellor label, it is also another record made by the record label owner himself.  Italian-American Peter De Angelis and his partner Bob Marcucci owned Chancellor records. Together they were responsible for the success of Italian-American teen idols Fabian and Frankie Avalon. 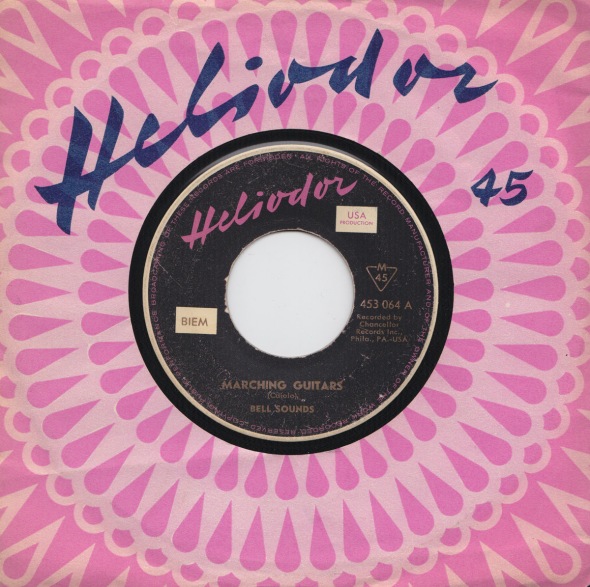 One more German Heliodor pressing, lisensed from the Chancellor label. Originally this was Chancellor # 1043, released right after Peter De Angelis Exotic Guitar. I couldn´t find any information about the Bell Sounds group on the Internet. 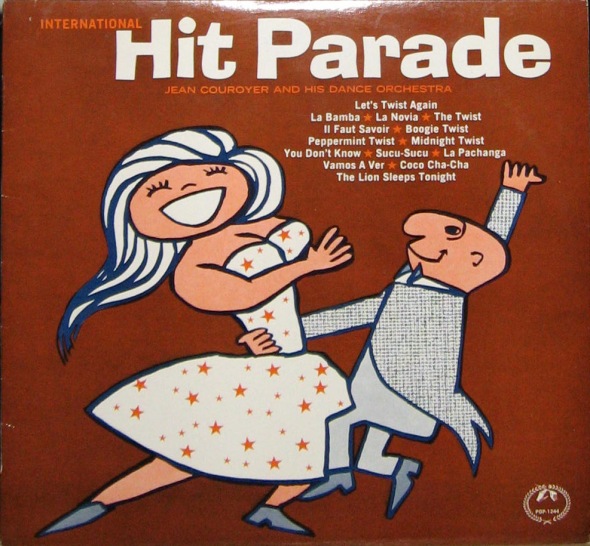 “A popular melody is as international a language as you will find anywhere in this world of ours. You don´t have to know the text to hum or whistle a happy tune – no matter what country of origin.

It is therefore little wonder that dance band leader Jean Couroyer roams musically across many borders in gathering material for his recording and makes sure of the widest possible acceptance by selecting the most popular dance rhythms.” (J.H. Watson from the liner notes to International Hit Parade)

This is another Swiss Varieton LP that I bought together with the Aprés-Ski in Kitzbühel album.  Varieton was a sub-label of the main Swiss label Ex-Libris, used for budget releases like this one. The production is not so bad though, using thick cardboard and slick printing. It looks almost like an american album. The illustration on the sleeve however looks like it was drawn in five minutes by somebody who was not into the job at all. And it probably was. Regrettably I have had similar experiences in the past. The customer doesn´t really care or know the difference and I don´t really care or have the time either. So I rush a job. But receiving some product weeks later that reeks of all the reluctance it was crafted with feels bad. It´s embarassing to do poor work. Luckily those jobs are the exception, but at least for some reason they are always the best paying.

The raw and bold brush work and the combination of the innocent big girl dancing with the bald little man stands out though. He´s hanging in mid-air and she´s missing an arm but there´s a primitive charm to it. Most certainly the rest of the album´s design was done by other people than the guy who did the sketch. The Ad Lib font used for the title of the album was designed in 1961 by Freeman Craw for the American Type Founders (ATF), so it was pretty hip at the time. When I see the font I think of Crypt Records, because they have used it excessively on their album covers and for their catalogues since the 1980´s. 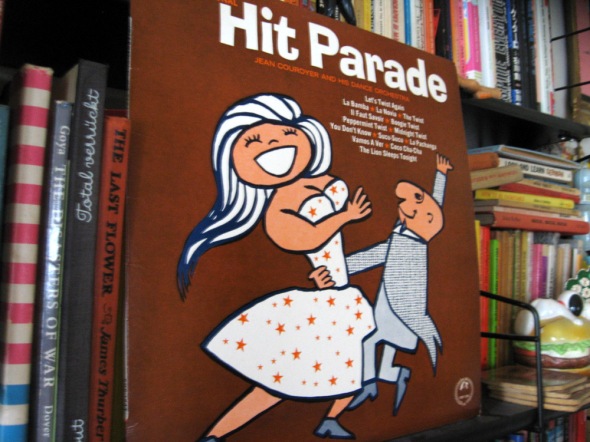 Sure, all this analysis is redundant considering that apart from three twist songs the album is pretty forgettable, at least to my ears. But I buy some records for other reasons than the music and I do enjoy this restrained orchestra rock´n´roll that was made for old people. Maybe because I am old. Not a lot of information on the Internet about Jean Couroyer, but I guess he is from Switzerland. 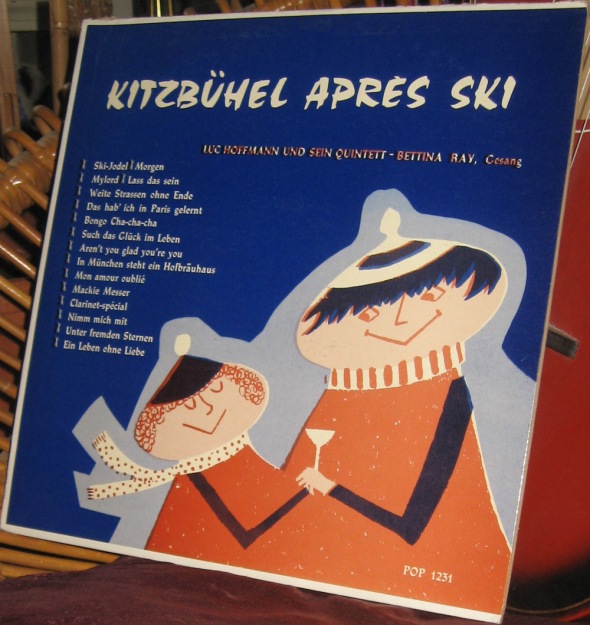 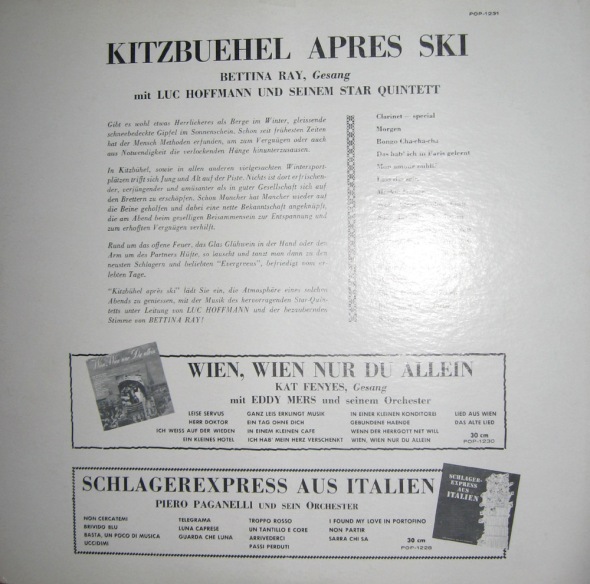 Last week my girlfriend and me returned safely from our snowboarding trip to Austria. Exhausted from the 12 hour bus ride but also energized from all the activity and the pure air way up in the Alps. 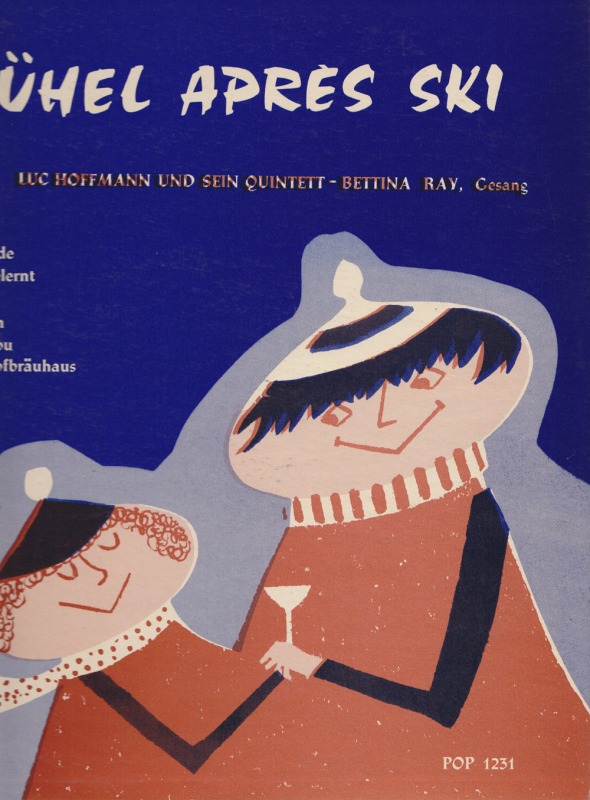 Here´s aprés-ski music from 50 years ago.  Kitzbühel is still one of Austria’s best known and fanciest winter sport resorts. Of course the kind of music they play there today is much different. We were not in Kitzbühel but in another town, but I guess all these Austrian ski places are similar. Whatever the music would be like, we´re never doing any after-ski-partying anyway. It´s lame, but we´re too old. For us it´s all about snowboarding and hanging out with nice people. Having a hangover from too much alcohol and losing a day of snowboarding would be super lame. 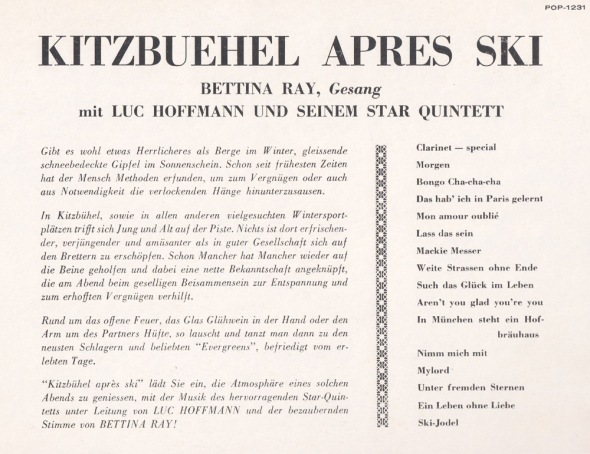 About the record:   I couldn´t find information about Luc Hoffman or Bettina Ray but I suspect they were from Switzerland. The Varieton label was a sub-label of  Ex-Libris, the main Swiss record label. Luc Hoffmann and his Quintet recorded a twist record for the Swiss GPK label and another for the French Gala des Varietes label. (If you´re quick you might want to grab that 8-song twist EP on Ebay. I bet it´s great. If you win it please let me hear it).

Bettina Ray is copying Zarah Leander´s over-dramatic style of singing, which doesn´t really fit the swinging jazz band that is backing her. Not a lot of bongo in the cha cha cha either, but still kinda sweet how Bettina is trying to get all South-Amerikan…