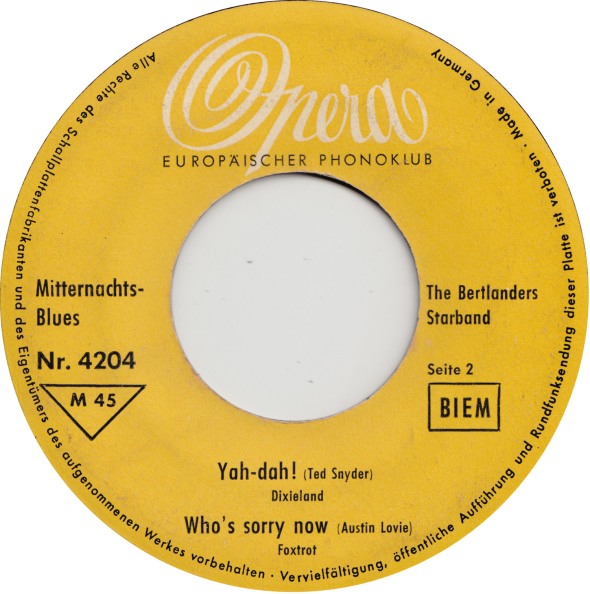 Found this in the 50 cent bin of a local thrift store recently. Sleeveless, but still in okay condition. Here´s all the information that I could find about this mysterious, completely forgotten group.

– Bert Landers was a Berlin band leader who recorded a great number of records for various German labels, but mainly for the budget Tip. He also recorded under the name of Berth von Landers und sein High Society Orchester. I assume that The Bertlanders-Starband is actually the studio orchestra of Bert Landers in one of its earliest formations.

– Trumpeter Heinz Wulfestieg (1936–1977) was a half-brother of actress Hildegard Knef.

–  Alto-Saxophonist Dieter Siebert might be identical with 20th-century classical music composer Wilhelm Dieter Siebert (1931-2011). His Wiki-resume mentions that he played Jazz in the late 50s.

These four tracks, exclusively recorded by Opera – Europäischer Phonoclub, have not been reissued in 50 years.

Yah-dah! is a nicely up-dated version of one of the earliest Jazz recordings,Yah-de-dah,  first recorded in 1917 by the Frisco Jass Band.