The Olympics, or simply Olympic,  from Prague were and probably still are the most well known Czech rock´n´roll group. I collected most their early 45´s in the 90´s when the East-Berliners threw out their old records to make room for new CD´s from the West.  This is not among Olympic´s best records but pretty much their funniest.

Or maybe this one is:

Pavel Bobek played with Olympic from 1963 to 1965 and then went on to become one of Czechoslovakia´s most popular  country music stars in the 70´s and 80´s. 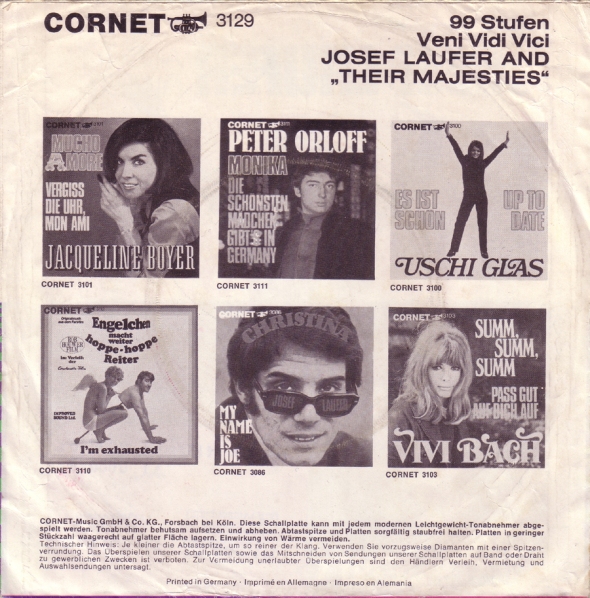 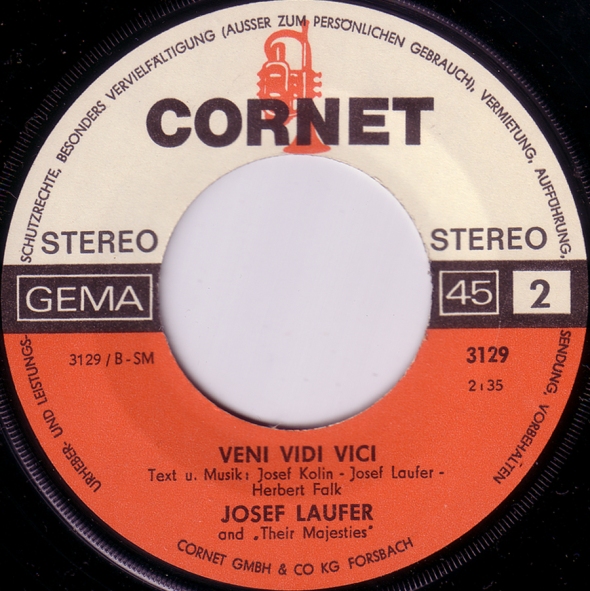 Josef Laufer was one of the few artists ( like Karel Gott, Waldemar Matuska, Vaclav Neckar, Hana Hegerova) from Communist Czechoslovakia who got to record in Western Germany. Of course they also recorded and performed in East-Germany, a socialist brother-country.

Here you can see Josef Laufer playing alongside Vaclav Necker in a Czech musical. The guy posing on the ladder in the denim jacket, that´s him. Very cool. I can already hear the Russian tanks rolling in the back …

I have four of Josef Laufer´s early EPs that he made for the Czech Supraphon label, and even one on the Romanian Electrecord label, but none are as rockin´ as these two songs here, that he sings in German. 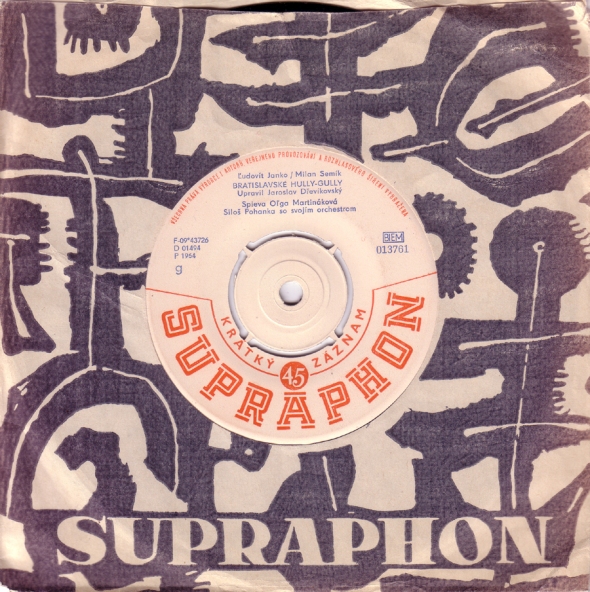 By 1964 the Hully Gully dance craze had made it to Bratislava,  Czechoslovakia. This is a pop song and not as strong as the Rock`n`Roll instrumental  Hully Gully by Olympic, the leading Czech Beat group of the 60`s, but it is more interesting. At least it fires up my imagination more about the Hully Gully scene in Bratislava in 1964… 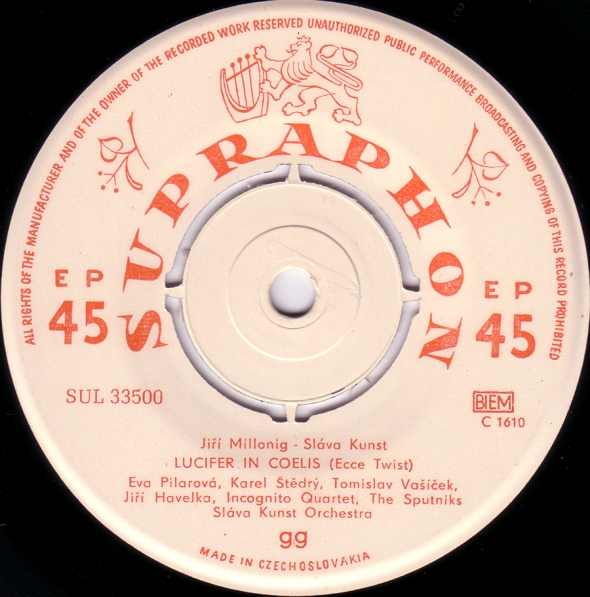 “Lucifer in Coelis” was lifted from obscurity by the Surfbeat behind the Iron Curtain bootleg-compilation that Dionysus records put out in the 90`s and is now known as the East-European Twist/Instrumental-Novelty song.

That compilation put Eastern European Rock`n`Roll back on the map  just like the “Killed by Death”-compilations did with obscure Punk records. It`s funny that a bootleg is distributed by Barnes & Noble and Amazon but it`s sad  that it`s also the only thing that pops up, when searching for Slàva Kunst on the Internet.  That and a bootleg casette of a Polka album of his that somebody offers for 9 dollars…

The Slàva Kunst Orchestra backed many Czechoslovak artists in the 60`s and recorded a whole lot of records in all kinds of musical styles. Slàva Kunst was among the most well known Czechoslovak Orchestra leaders throughout Eastern-Europe.

It´s a mystery to me why his music has never been re-released. These records here are only a small portion of his output, concentrating on Slàva`s rockin`and twistin`sides… 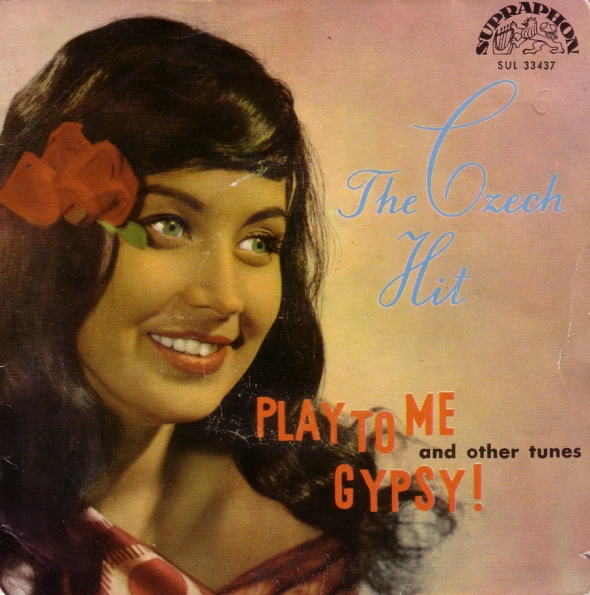 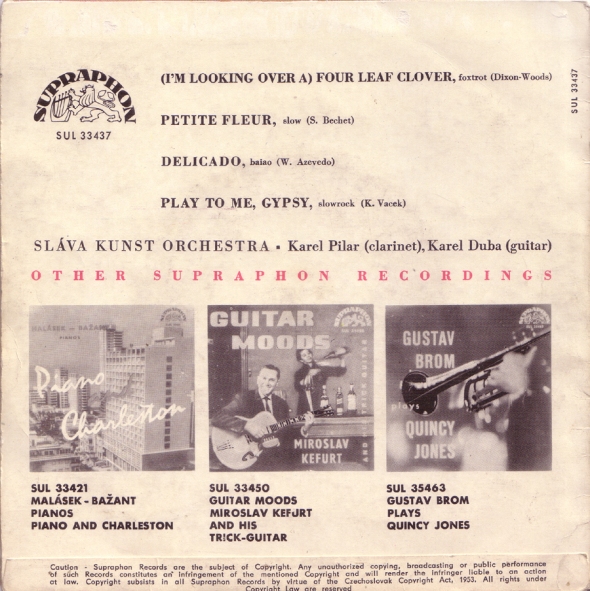 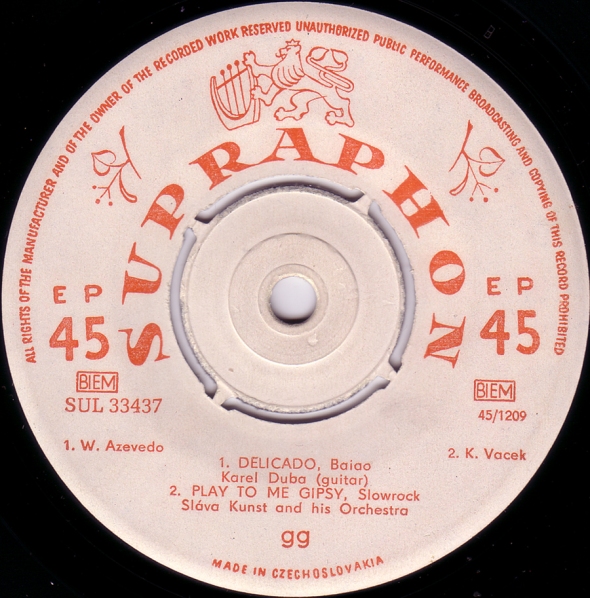 “Delicado” is a Brazilian guitar-standard written and  recorded by Waldir Azevedo in 1950.  The Sláva Kunst version is a nice Latin-American/Rock`n`Roll blend.

The guitar-player on this record is Karel Duba. Duba was the leading Czech  Rock´n´Roll instrumentalist of the 60s. He played in the Sláva Kunst Orchestra but later left to start his own group. Just like Sláva Kunst,  Karel Duba`s music has not been  re-released comprehensively yet. 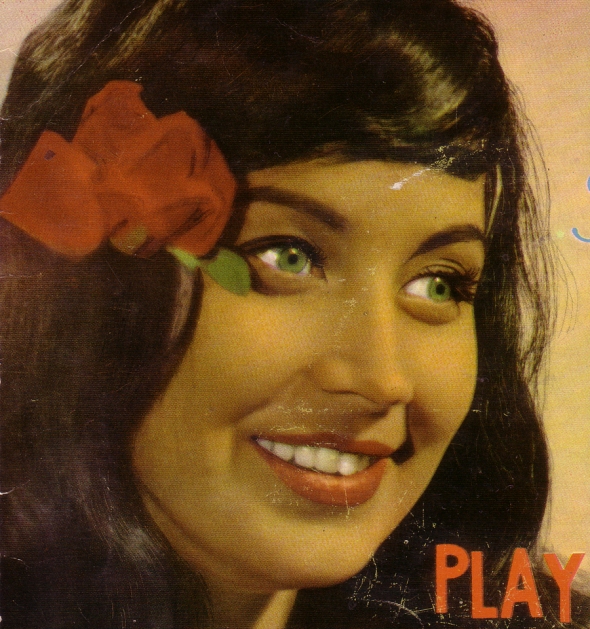 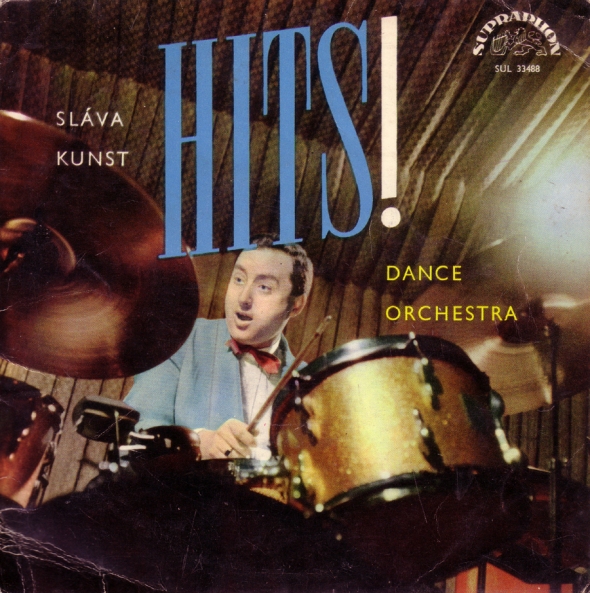 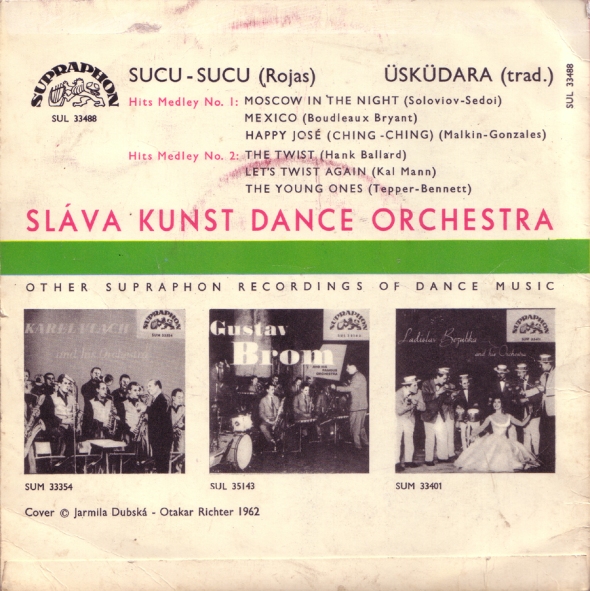 I could probably fill this blog with Czechoslovak records exclusively but  I don`t feel competent enough to do so.   For example: Who is this behind the drums ? I don`t know.

I bought all of these records in Berlin! These records all came here once from other Socialist Brother States. On my sole visit to Prague a couple of years ago I bought a lot of Supraphon 45`s but not a single one with a 4-color sleeve. 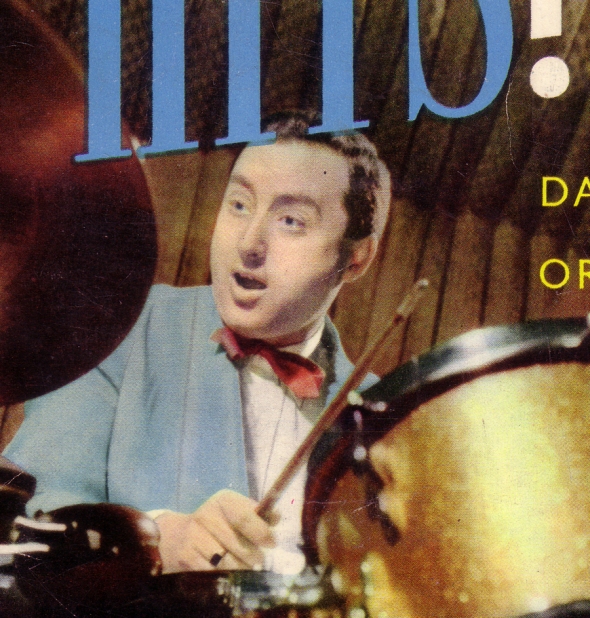 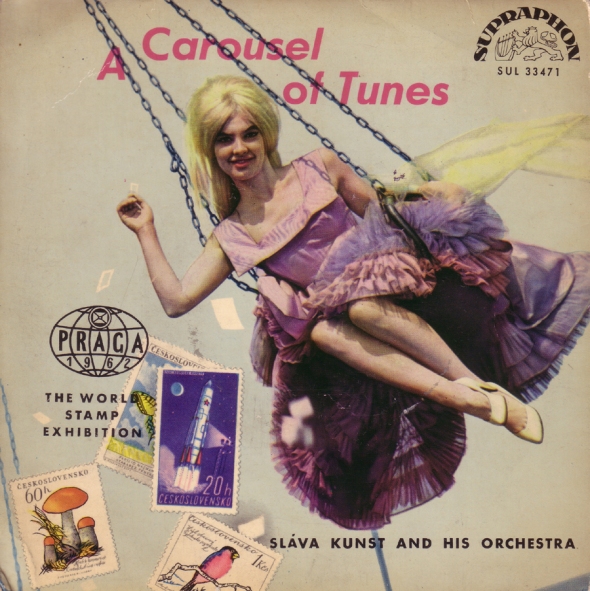 This was probably a souvenir record to commemorate the “International Prague Stamp Exhibition 1962”.

The state-owned Czechoslovak record company Supraphon released a lot of beautifully designed LP and EP sleeves. Emulating the French EPs with their laminated covers, they  even went so far as to attach the little perforated pieces of cardboard that had the name and release number for re-ordering. Only, these records were made solely for export, to show-off to the outside world. The local Czech versions of the same records mostly had simple company sleeves:

On this EP: two mail-related twist songs, “Postman Twist” and “Pigeon Express Twist”, a instrumental version of the “Babysitter Twist” and a cover-version of “Got a match?” by the Daddy-O`s from 1958.

Apart from the cool design, the woman on the sleeve does look kind of campy… 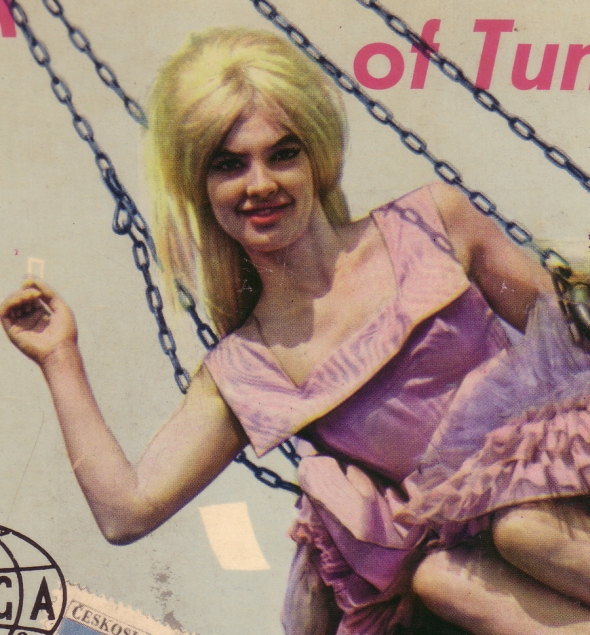 “Got a match?” was written and produced by Billy Mure and went to # 39 on the Billboard charts in 1958. Billy Mure a brilliant guitar-player went on to record a series of albums called “Supersonic Guitars”.

The other one is a tune for all proud fathers: “Have a cigar!”

This made-for-export Ep has a short introduction to the artist in English on the jacket:

“Orlando is a twenty-year old Italian singer born in Cairo, Egypt. He moved to Paris where he swiftly made a name for himself as a successful interpreter of top-hits of the day. Orlando is a Bel-Air-Barclay recording artist.”

It doesn`t mention that Orlando,  born Bruno Gigliotti is the youngest brother of Yolanda Gigliotti, better known as Dalida.

Somehow the Slàva Kunst Orchestra got to back Orlando on “Mustapha”,  a 1960 hit in France for Bob Azzam, also for Barclay Records.