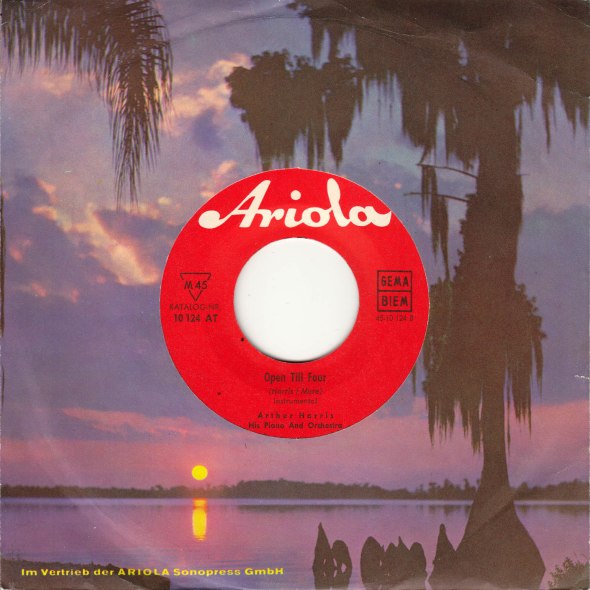 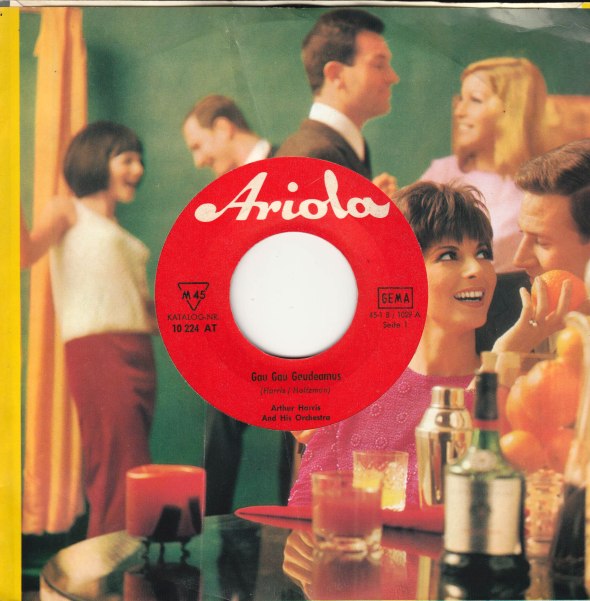 I´ve been restricting myself to posting unreleased stuff that nobody else has ever digitized. Mostly material from small labels, but even major labels forget what´s in their catalogs. Especially major labels, because they´re so occupied with chasing the next big trend. Arthur Harris is such a forgotten artist.  He shares the name with Sir Arthur Harris, Marshal of the Royal Air Force, commonly known as “Bomber” Harris. The guy that flattened out Dresden, Hamburg and Berlin during the Second World War. But our Arthur Harris is another man, he just played piano and led an orchestra. The only other release that I could find on the Internet, is his Ariola LP “Arthur Harris His Piano And Orchestra – Nachts am Broadway“. The Mure in the song writing credit of Open Till Four, might be guitarist Billy Mure. But that´s just a guess.

Anyway, both tunes have never been re-issued in digital format and are not available anywhere else. The artists are unknown and nobody has cared to reissue the record in 50 years. I think it´s fair to present it

Open Till Four is a nice swinging instrumental…

Gau Gau Gaudeamus is the traditional song Gaudeamus Igitur, turned into a twist.

THE ACCORDIONAIRES, Accordeon Rock and Roll 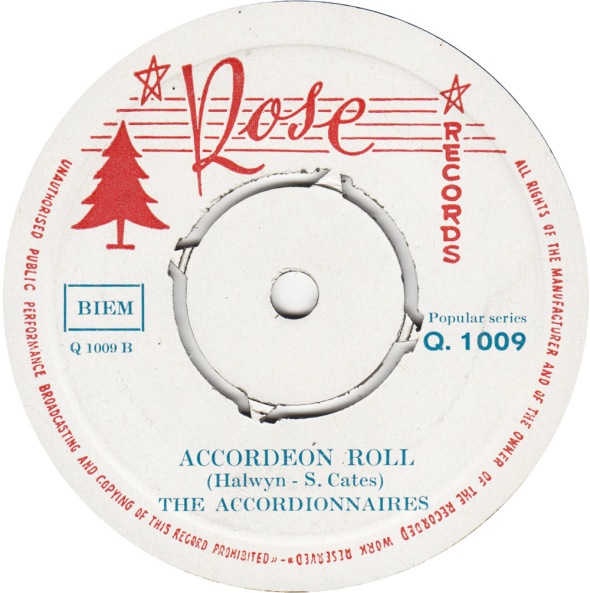 In the 1950s, Rock´n´Roll was a force. Some brave accordionists were still holding their ground, not ready to give up the fight. But it was a losing game, loud electric guitars were taking the world by storm. Since then, they have more or less replaced acoustic instruments like accordions, recorders, zithers, cazoos and washboards in popular music.

The Accordionnaires, on the other hand,  tried to go with the times…

Found this Rose Records 45 in Vienna a couple of weeks ago. No idea when or where it was published. No trace of it in the digital world either. Obviously it´s never been reissued. About the only thing that popped up, when I searched for The Accordionaires on the Internet, was this music book.

More Blockflöten-Rock. Here´s  one more version of  a rock´n´roll instrumental by Johnny and the Hurricanes that uses a recorder to simulate  the band´s trademark Hammond Chord organ, played by Paul Tesluk. Lothar Nakat´s arrangement of the Hurricanes 1960 hit Beatnik Fly was initially released by the small indie Starlet. Apparently Starlet regularly licensed Nakat´s recordings to a couple of dozen other budget labels like, in this case, Deutscher Schallplattenclub, out of Stuttgart,  a record club like Bertelsmann, Opera and Jazztone,

Lothar Nakat´s happy “recorder rock”-version of Beatnik Fly might not sound as dangerous as the original, but I think  it´s really sweet! It´s a shame that it has not been reissued in more than 50 years. 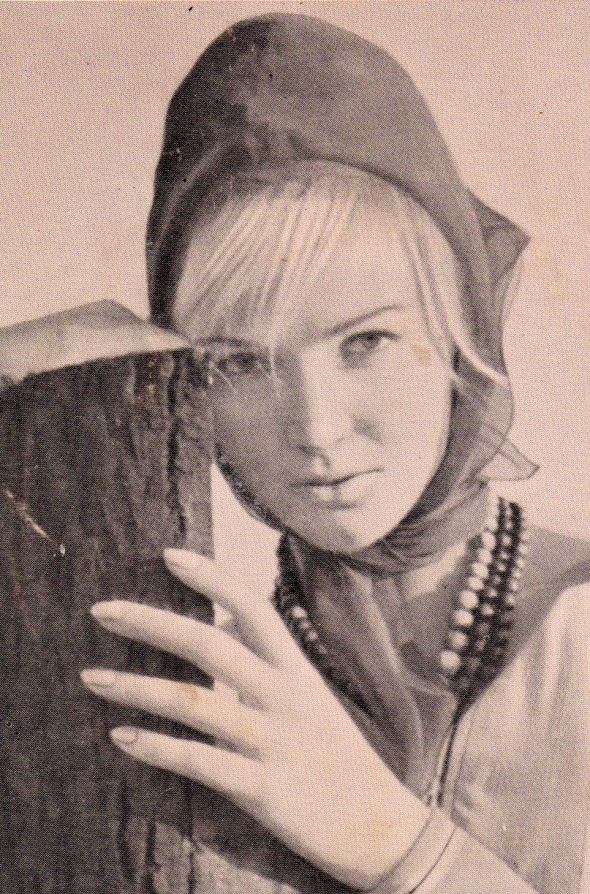 Around 1960, the Hallo label out of  Rastatt/ Baden-Württemberg, released around four dozen flexi discs, often containing original tunes, to go with their Hallo magazine, a rock´n´roll knock-off of Bravo. I haven´t posted any Hallo flexis, because a book about Hallo and a CD, was soon to be released. That was years ago, but so far, no book. If the book and the CD finally come out,  I´ll be happy to buy a copy. Meanwhile, this Hallo flexi is fine blog material: 50 plus years old, defunct label, unknown artists, not available in digital format elsewhere.

Franz von Suppé´s Liebestraum was turned into a Twist hit in 1961 by Charly Cotton and his Twistmakers, a band led by prolific songwriter Christian Bruhn. I´ve posted a bunch of versions of Der Liebestraum als Twist over the years, by Jimmy Brown (Tempo), Bert Landers (Tip) and Bob Gerry (Baccarola and the Gary Edwards Combo (Oriole). This Accordeon-Jazz-version,  typical of the 1950s trend of Jazz-takes on Classical music, predates Charly Cotton´s.

The condition of this flexible record seems to be the result of a familiar scene. Flexis were cheap products for teenagers, teenagers that lived in the same rooms with their little brothers and sisters. Like I did with my little brother until I was 13 years old. Frequently we would get in fights. I´m sorry to admit it, but my brother always lost.

In revenge, he would take his crayons and draw all over my stuff…

Angel of Love was first recorded by Charlie Gracie for Coral in 1959. Teddy Palmer, recorded a German version for Electrola the same year, in the rrrrrock´n´rrrrrollin´Peter-Kraus-style. 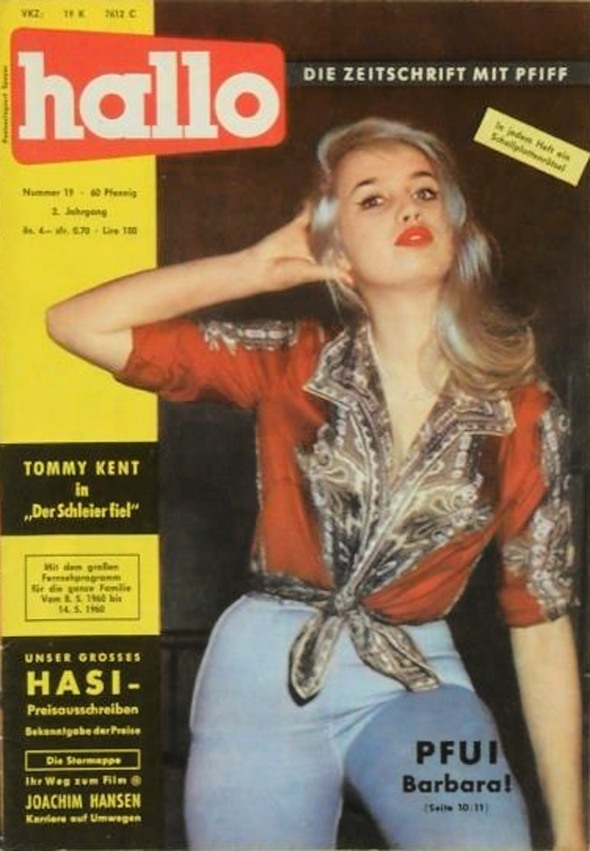 Fred Jasper was a Dutch Singer from Den Haag.  According to the Netherland Discography Site, he also operated a record shop in Leyweg 535b, Den Haag. Jasper started his recording career with three Rock´n´Roll 45s for the German mail-order company/department store label Qellux. I posted another rockin´ Quellux 45 a while back.

In 1962 Fred Jasper recorded a fine version of Tommy Roe´s Sheila in German for Electrola and in 1968 an even nicer version of Tom Jones´Delilah in Dutch. The same site states that he made his last record in 1980.  Apparently Fred Jasper died at an unknown date. If that is true, I assume it was before the advent of the Internet, because there is no info at all to be found.

Otherwise, the songs have all the usual blog requirements: not available in digital format elsewhere,  artist dead or no longer active, no reissue in 50 years.

In 1966, a local radical leftist theatre group re-invented theatre for children. Despite criticism from the conservative mainstream, the socially conscious plays of Grips theatre became increasingly popular. Kids like me, who grew up in the early 70s, especially loved the bold and very catchy Grips songs, that were mostly written by Volker Ludwig and Birger Heymann.

These are great songs that do not deserve to be forgotten. Unfortunately so far nobody has cared to re-issue them. 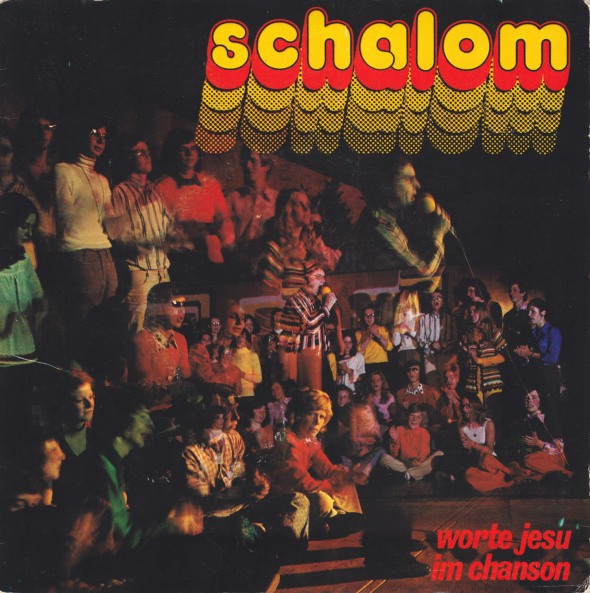 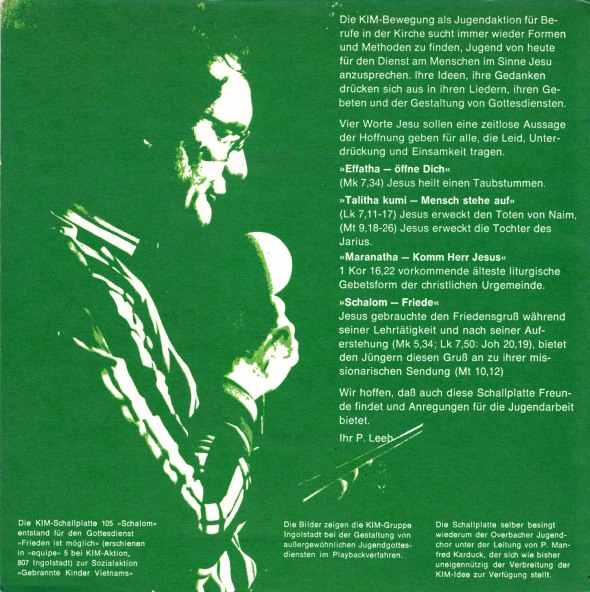 This is an EP that I found last week in the 50 cents bins of a local second hand record store. Didn´t even listen to it in the store, but was expecting some boring Christian music from the subtitle “Worte Jesu im Chanson“. What a surprise, when I put the needle on the record!  Of course, if I had read the liner notes more carefully, the name Peter Herbolzheimer would have rang a bell. No idea why such a highly acclaimed jazz musician contributed to a record that was meant to help “The advancement of the clerical professions”. In 1972, Herbolzheimer, together with Jerry van Rooyen and Dieter Reith, won the highest German medal of honour, the Bundesverdienstkreuz, for the opening score of the Olympic Games in Munich. Incidentally the three of them teamed up again for this record. Herbolzheimer died aged 74 in his hometown of Cologne on 27 March 2010

Despite the big names, these songs have never been re-released, obviously because they´re suffering from a severe case of Flandersitis.

But listen to the funk! 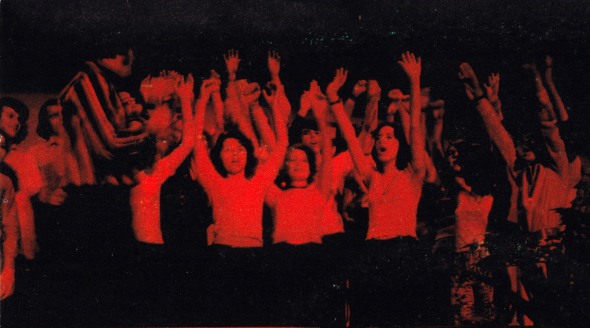 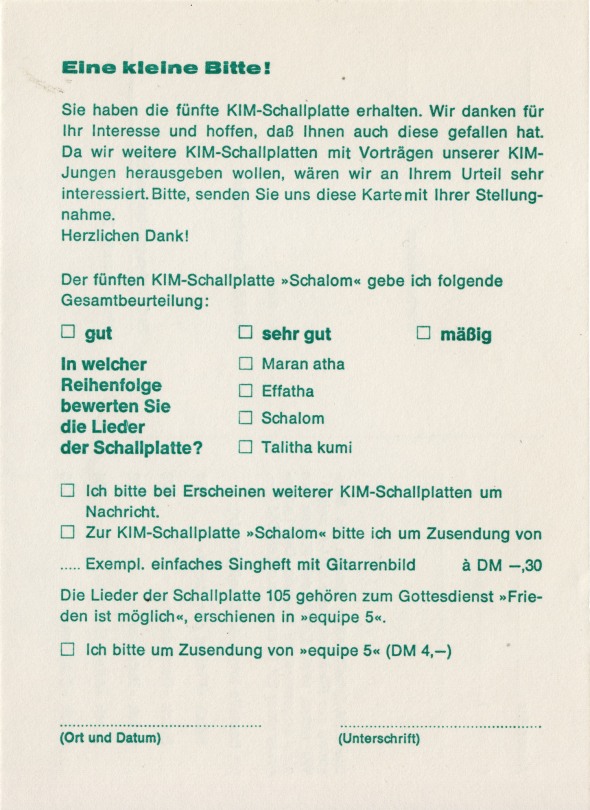 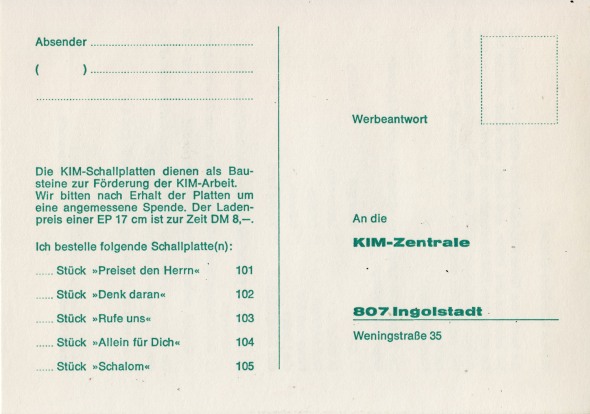 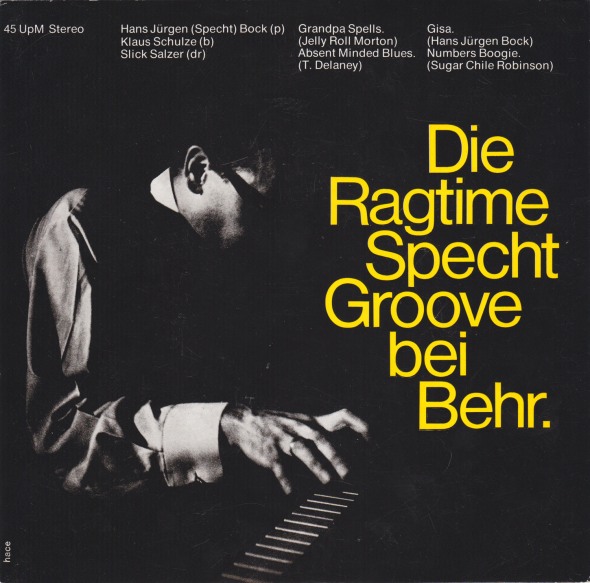 This 45 is fitting easily  into the concept of this blog. It´s a privately pressed EP, that has never been reissued in 40 years, of four jazz tunes, recorded live at a furniture store in 1973, on the occasion of a design-exhibition.

The fact that this 45 is a promotional item makes it seem musically inferior to a proper jazz release, but it´s far from that. Band leader and pianist Hans-Jürgen “Specht” Bock  (1939-2006), bassist Klaus Schulze and drummer Slick Salzer were already seasoned jazzmen when they recorded these songs. Everything is excellent here, even down to the graphics, credited on the front to a certain hace. I especially dig the label design that doesn´t imply “furniture store”.

The Ragtime Specht Groove recorded five albums. For this EP they cover Jelly Roll Morton´s “Grandpa Spells”, Tom Delaney´s “Absent Minded Blues”, first recorded by the Dutch Swing College Band, and “Numbers Boogie” recorded by Sugar Chile Robinson. My favorite of this batch is Ragtime Specht Groove´s own original tune “Gisa”. I especially love the part when they go to a minor scale in the middle of the song and the bassist changes from playing with the fingers to a bow, Jimmy Blanton-style. And then suddenly they pick up the tempo again!

These Stuttgart cats sure were groovin´… 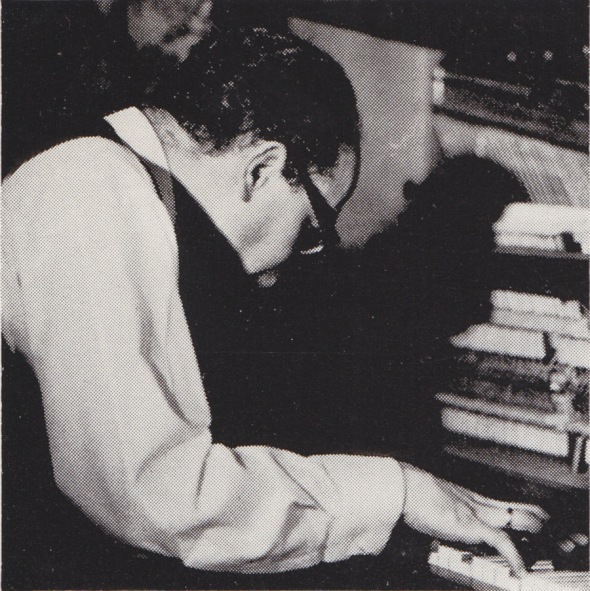 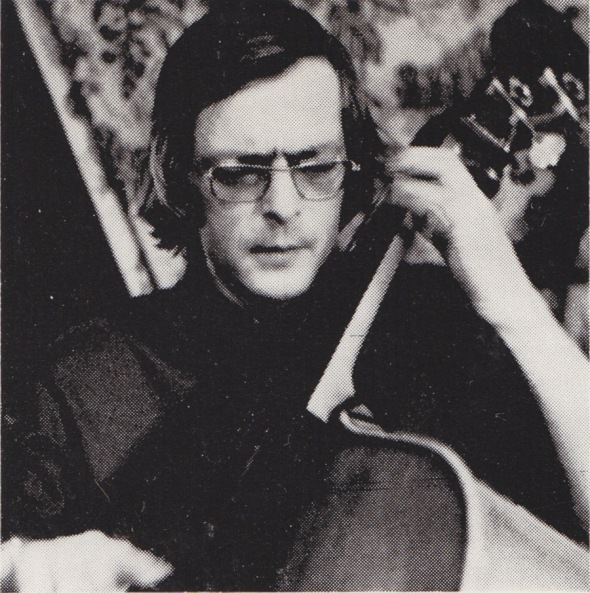