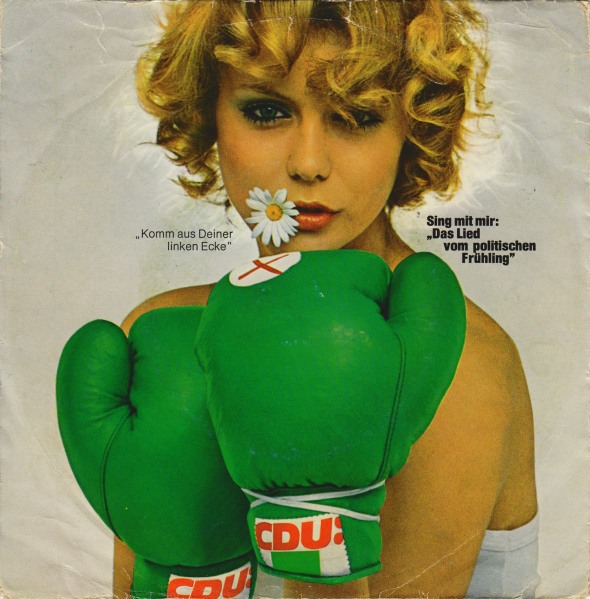 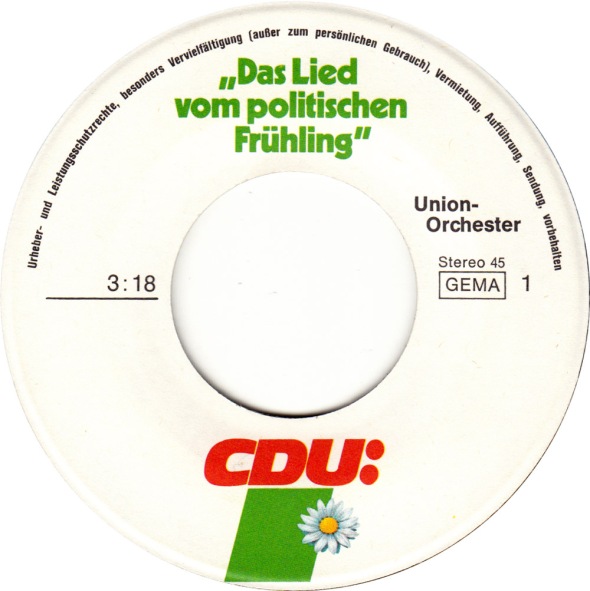 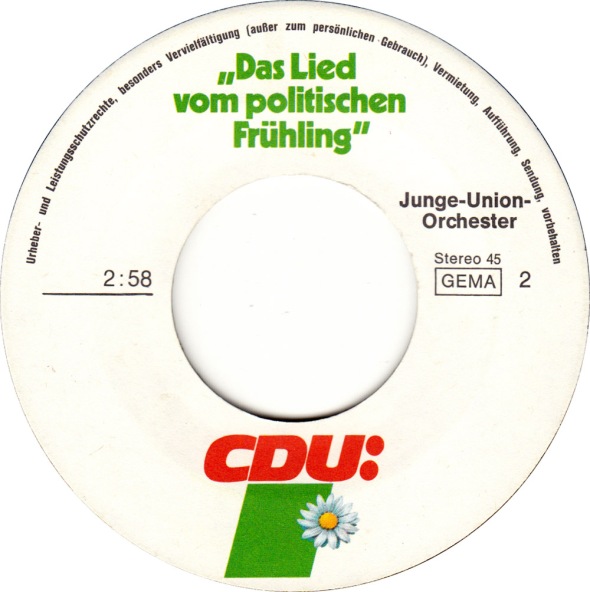 In a couple of weeks it´s election time in Germany again. A  pretty boring affair these days. The conservatives will most likely win again. Nothing will change.

During the 1970s it was vice versa: the conservatives were always struggling to kick the social democrats out of office. But no matter how catchy their songs were, they failed each time.

In 2008 I posted another catchy CDU song here and wrote about it in Jungle World here. 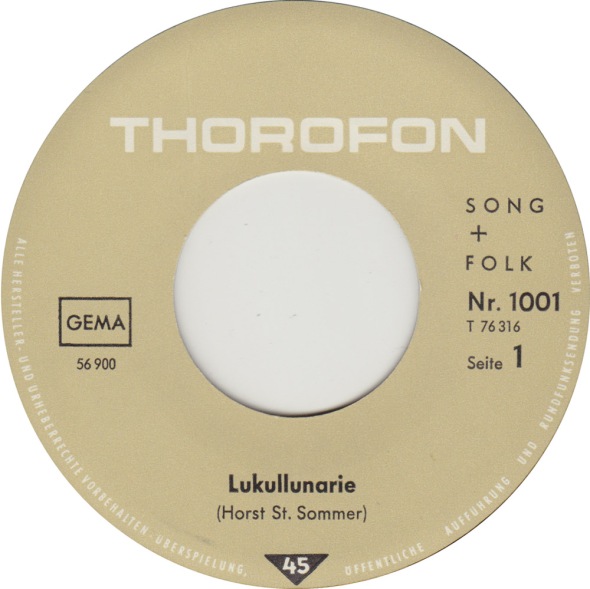 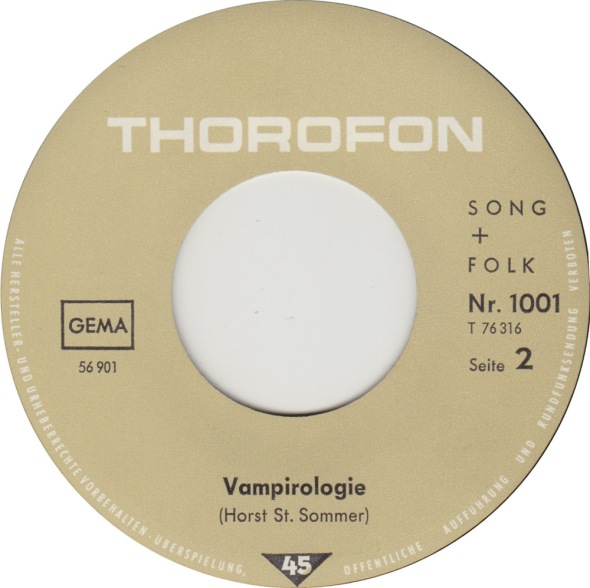 Local Berlin singer-songwriter Horst Steffen Sommer was on a humorous mission to kill clichés. In the liner notes on the back of the sleeve he is described as “a notorious pain in the neck” and then quoted: ” I want people to realize that it´s nonsense to be creeped out. They should learn to laugh at all the clichés of what is creepy and disgusting.”

While fighting  the horrors of war, greed  and capitalism are still worthy causes, some people in the late 60s counter culture also tried to get rid of two-person relationships, the family and stereotypes. Those were hopeless endeavors. Sommer´s wish nevertheless fulfilled itself over time. Horror movies of the 1960s only make people laugh today.

The liner notes also mention an LP that was due to come out at the end of 1969. Maybe it never did.  Unfortunately none of his songs have ever been reissued. These are great weird songs  that  deserve a better spot in the pantheon of German musical weirdness.

The record is signed on the inner sleeve:

“If your environment makes you feel out of place, courageously grin in its face.”

Best wishes to Monika and Arno 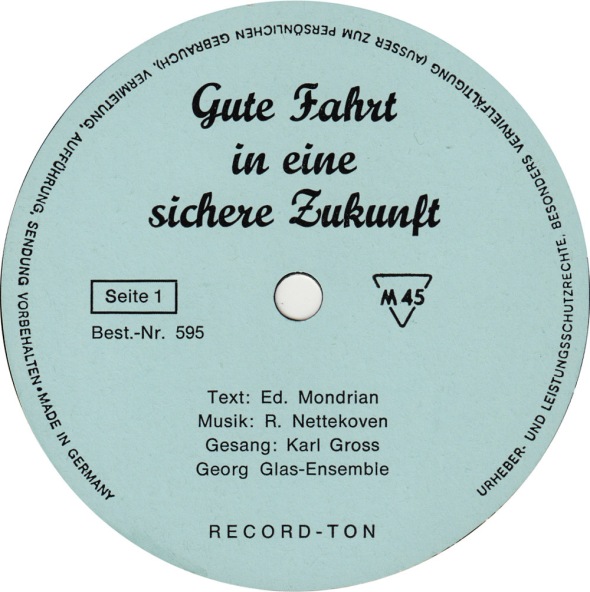 Another flexible record, this one advertizing for a political program: the Leber-Plan. Georg Leber (1920 – 2012),  a German social democratic politician,  was Minister for Transportation from 1966 to 1972. When in the late 60s the volume of traffic on the German Autobahn reached a unmanageable size for the first time, Leber introduced a plan to minimize cargo transportation. The idea was to have freight traffic largely done by train instead of trucks. Well, as we see today, the plan never made it. Traffic jams have become a part of everyday life and trucks still keep clogging the highways…

The practical purpose of this record – campaigning for the Leber-Plan – is not explained on the sleeve, apart from a girl in a mini-dress getting into a car on the front, and a speeding train of the Bundesbahn on the back, but is reflected  in the length of the political lyrics.

The obscure singer Karl Gross was  a man of many trades and names, alternatively calling himself either Karl, Carl, or Charly Gross. He recorded quite a number of equally obscure schlager records for big labels like Polydor, Ariola and Philips, for smaller labels like Bella Musica, Populaer, Saba, and Linda and even budgets like Neckermann and Starlet.  I posted one of his Metronome 45s in 2009 Carl Gross & Die Flaschenkinder – Wir Sind Die Flaschenkinder/Wum Wum Wum.  No idea when this commissioned work came out, but I´d guess in 1969 or 1970. Musically this is pretty much in the Heino school of German schlager.

In Germany being on time still means a lot. Friends still make appointments like: “Let´s meet next Friday at the big oak tree next to the railroad station at 21:45.” And then they show up at that exact minute! Likewise Germans  take the reliability of public service, like the railway system, for granted. Understandably, if something goes wrong, it´s a huge disappointment,

Recently Deutsche Bahn made national headlines once again when the train station in Mainz (a city of more than 200.000 inhabitants) had to partly shut down due to most of the station´s traffic controllers being ill or on vacation. A couple of days of irregular service were  called “chaos”, “crisis” and “a scandal” and  caused a huge public outcry.

Here´s a look back to the past, when German trains were a lot slower but always reliable. This one-sided flexible advertisement record, made by Bundesbahn (the predecessor of Deutsche Bahn) and recorded by anonymous artists in 1966, glorifies the service, punctuality and speed of the railroad.

Here´s the film that went with the campaign in 1966:

When I saw this EP last week in a thrift store in my street I first thought that it was just a typical stereo demonstration record. Until  I noticed that Hans Koller was featured on it and bought it for one euro. At home I searched for more information and discovered that somebody is trying to sell it on Ebay for 125 euros! Of course nobody will buy it. But why is a record that advertizes for the 1959/1960 SABA-Stereo Truhe, (a TV, a radio and a record player combined into a piece of furniture), considered to be so valuable?

Most probably because of the one song by Austrian jazz tenor saxophonist and bandleader Hans Koller  (1921-2003), one of the few  pure jazz musicians who managed to play his music after the Beatles dropped the bomb on jazz in the 60s. Most other German and Austrian jazz musicians either had to play Schlager or dropped out.

This record is also unique because it was one of the first releases produced by SABA, a German manufacturer of electronic equipment, before the company actually branched out into the SABA label. The note/fir tree symbol on the sleeve signifies the black forest where the company and the studio was located. In 1968 SABA, a variety label, was renamed to MPS, the first German label to exclusively release jazz. SABA issued three LPs by Hans Koller from 1963 to 1966. In this respect Koller´s “Tribute to SABA” , recorded in 1958 in Sandweiher near Baden-Baden, was a tribute ahead of time.

Now you probably know by now that I´m not a jazz expert. In fact I don´t care for most of what has passed for jazz in the past 60 years. I like jazz that you cannot stand still to:  dance music.

Well, this is still sufficiently swingin`…

If you like this you might want to check out an EP by Zoot Sims and Hans Koller from roughly the same time on the German Brunswick label, that Boogieman posted in April. That one really makes you wanna move! 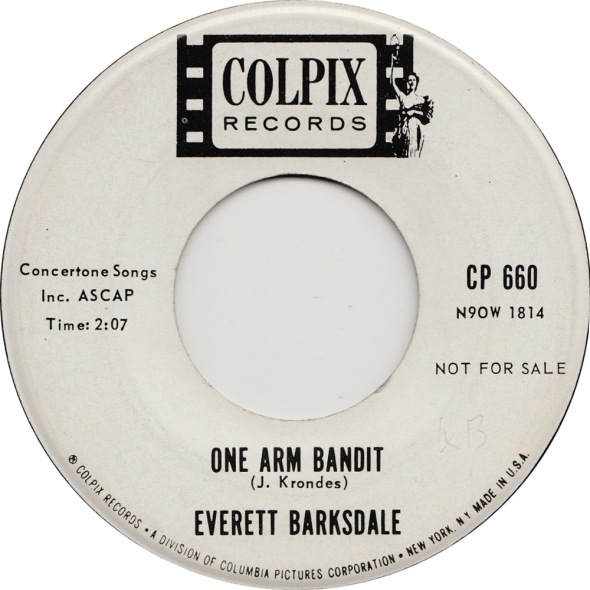 Everett Barksdale (1910-1986) was an American jazz guitarist and session musician who worked with anyone who had a name in the jazz field from the 30s to the late 60s.

As far as I could find out, Everett Barksdale only recorded two 45s of his own material, this one and another one (See You Friday/ First Flag On The Moon) in 1968 for the Murbo label. Both of them have never been reissued in any format.

Think about it and do the math…

GRADY MARTIN AND THE SLEW FOOT FIVE, Side By Side, 1953 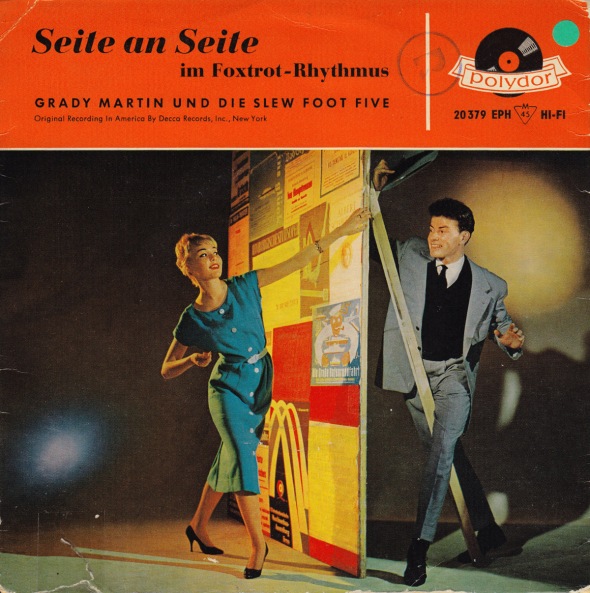 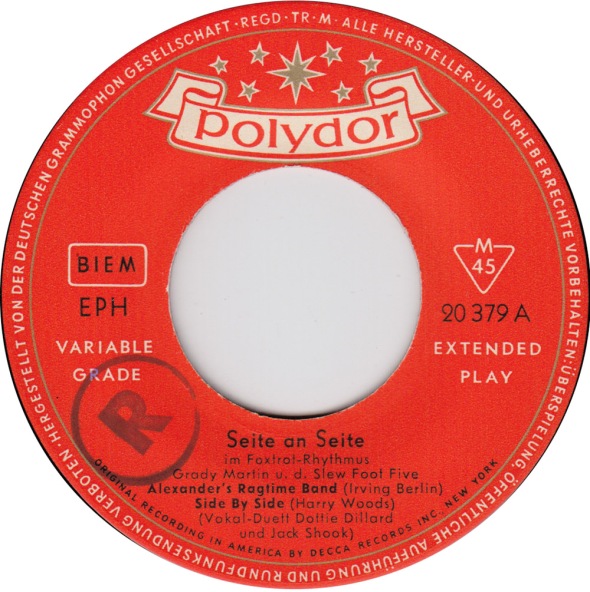 Grady Martin (January 17, 1929 – December 3, 2001) is in the Rockabilly Hall Of Fame. As a session guitarist he worked with anyone who had a name in the country and rock´n´roll field. Today he´s mostly known for the recordings he did with  Johnny Burnette. It´s actually his guitar playing that can be heard on most of the recordings of Johnny Burnette´s Rock´n´Roll Trio.

But Grady Martin´s own instrumental records with the Slew Foot Five were equally excellent. Side By Side, with vocals by Dottie Dillard and Jack Shook, was originally recorded in 1953 in Nashville. This German EP from 1958 collects four tracks that also appeared on Martin´s Jukebox Jamboree LP (1956).

Surprisingly the song has never been re-released in digital format and can currently not be purchased anywhere.

GRADY MARTIN AND THE SLEW FOOT FIVE, Side By Side, 1953