Gisela Jonas was a singer and bar owner. In Munich she still is a institution: “Die Schwabinger Gisela”- the Gisela from Schwabing. In the 50s and 60s Schwabing was the center of the Boheme in Germany, a place where artists, musicians, actors, “playboys” and all kinds of freaks met. Somebody from Munich could probably have written about her more competently, but apparently nobody has made an effort yet. She doesn`t have a wikipedia page and even more surprisingly, her music has never been re-released on CD or otherwise.

Born in 1929 Gisela started singing in bars when she was 20. In 1952 she opened her own bar “Bei Gisela” in the Occamstrasse, in the Munich district of Schwabing. In the late 50s and early 60s she was famous for singing dirty “chansons”. Her big hit was a parody version of “Der Novak lässt mich nicht verkommen”, a song about a woman’s indecent fantasies and her man “Novak”, who always keeps her from fulfilling them. In fact Gisela was so much of a one-hit-wonder, that she recorded many versions of that one song with new lyrics. Besides that she recorded a number of very good B-sides that i will focus on.

What I think is really great about her, is that she was so brave to sing about homosexuality, prostitution, drugs and sexual fantasies, when nobody was doing it. Her language is quite graphic, so much, that even today it is disturbing. Gisela Jonas was taken to court a couple of times but always got away without a sentence 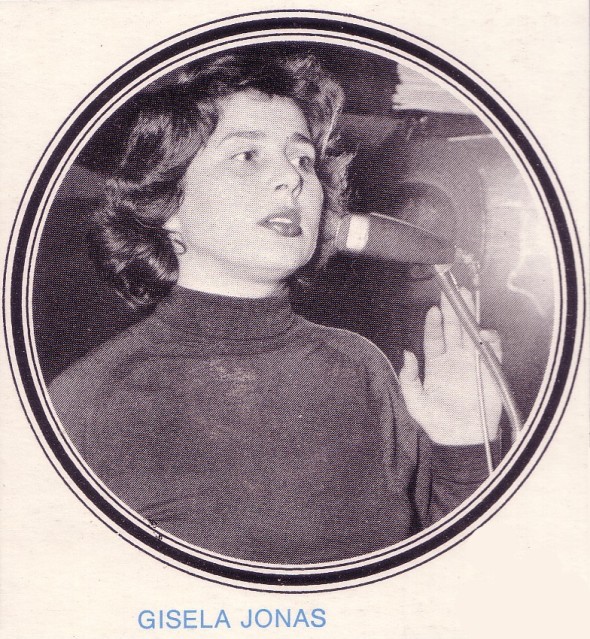 On the back of this record sleeve somebody pasted a snippet from a Berlin newspaper that came out at the time of it`s release. It reports, that 2000 records were confiscated in a police raid on Gisela Jonas apartment in Munich and that even in Berlin the record was only to be sold under the counter.

Starting with this record, most of Gisela’s records had little holes in them, were parents could put little locks to prevent their kids from listening to the dirty music. Near the hole it says: ” Take good care of the Key.”

The song “Die Männer sind so..”(Men are like that..) is probably Gisela Jonas most disturbing one. It deals with Sado-Masochism in a very direct manner. The Chorus is: “Wer mir imponieren will, soll herrschsüchtig sein. Ich muss eine Peitsche spüren, dann bin ich sein.”(Whoever wants to impress me, should be domineering. I have to feel a whip then I`m his.)

Years ago this was the first Gisela record I bought and I remember, that the contrast between Gisela’s homely appearance and the strong lyrics really struck me as odd.

This is another great example of Giselas Cabaret/Nightclub music. This is red-light district, night-time music at it`s best. A sort of dirtier Hildegard Knef style.The song “Die heisse Welle” (The hot/the new wave) is a up-tempo number with a long slow break. The lyrics are critical of the times, attacking cynicism and indifference.

Another great night-club song with a amazing guitar backing her . “Die drei Stationen” (the three stations) is about a womens first sexual experiences. First she gets raped, next time a old man pays her and in the end she pays for sex herself. A strange song. Gisela Jonas really had balls.

Gisela recorded at least two 45s for the budget label Bella-Musica that were of a lighter nature compared to her night-club stuff . The song is amply titled: “In the afternoon”.