Emil Gorovets was a popular Russian Pop singers in the 60´s and 70´s. Here he is singing on a souvenir record from the Russian resort city Sochi. The other tracks on this EP are lame and even this Twist has no Rock´n´Roll intrumentation. I don´t know Russian so I don´t even know what the real title of this song is. Maybe some Russian readers can fill us in on that one in the future.

Here´s a video of Emil Gorovets singing another song:

The song on this record is a nice little Russian summertime Twist. That´s enough to make me enjoy this…

(Update 07/18/2009: DJ Vova from Russia just sent me a mail with a lot of corrections and even translated the lyrics. I had it all completely wrong, this Emil is from Russia. All the singers on this Ep were Soviet Estrada singers. From Vova´s translation:

There´s  a summer that wanders around the lanes / Sun flows straight from the roofs / In the stream of sunlight / You are standing near a kiosk / Magazines shine with their covers / You look at them delighted / You saw a queen of beauty there / And I feast my eyes only on you / And you don´t realize / That with your beauty / You can overshadow any queen of beauty / And I go forward to you / And I bear flowers for you / As for only one queen of beauty alive.

The song titles on the sleeve read like this:

2. A Queen of Beauty by Emil Gorovets

3. My Black Sea by Georg Ots

4. That´s how steamboats are sent off by Eduard Khill

Thank you very much Vova!

DJ VOVA TOTAL BLAM BLAM is booking shows to take his Russian records to Western Europe this year . His first tour ended in complete desaster because he was arrested at the border, detained and sent back to Russia. We still seem to be far away from freedom, justice and equality in Europe. If you would like to help him bring his Dusty Soviet Rock LP´s-Tour to your city this time, please contact  DJ VOVA TOTAL BLAM BLAM. It´s also very interesting to read his full story of his first visit.

Yuri Alekseyevich Gagarin (9 March 1934 – 27 March 1968), Hero of the Soviet Union, was a Soviet cosmonaut. On April 12th 1961 he became the first person in space and the first to orbit the Earth. He received many medals from different countries for his pioneering tour in space. 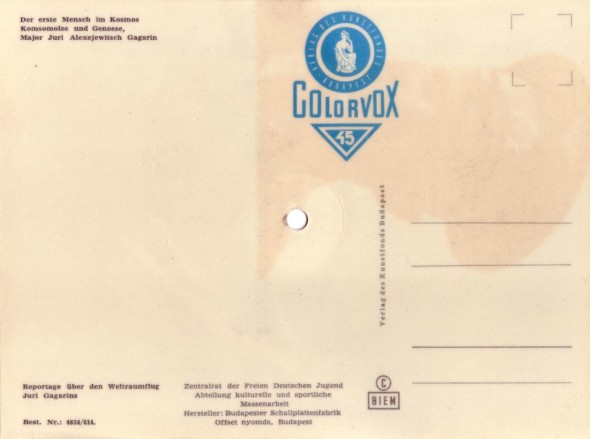 This postcard record commemorates this triumphant victory for the Soviet Union. On the record 27 year old Gagarin is heard speaking from space: He is overwhelmed by the look of the stars and the gleaming colours of space. Of course he also praises the Soviet Union, Khrushchev and Communism . One of the best lines of the narrator is: “These 108 minutes were forcing the Capitalist Camp once more to rethink: the Cold War is senseless.”

Gagarin later began to re-qualify as a fighter pilot. On 27 March 1968 , he and his instructor died in a MIG-15 UTI on a routine training flight. 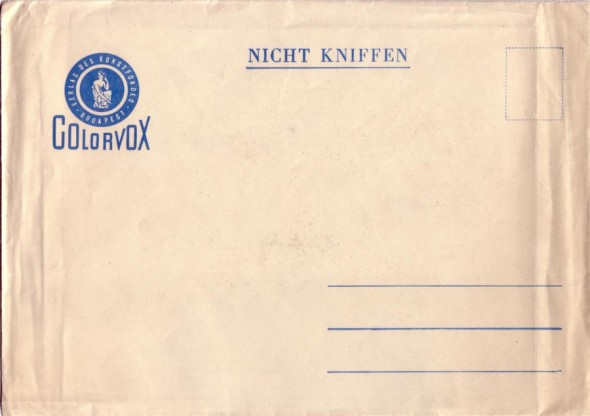