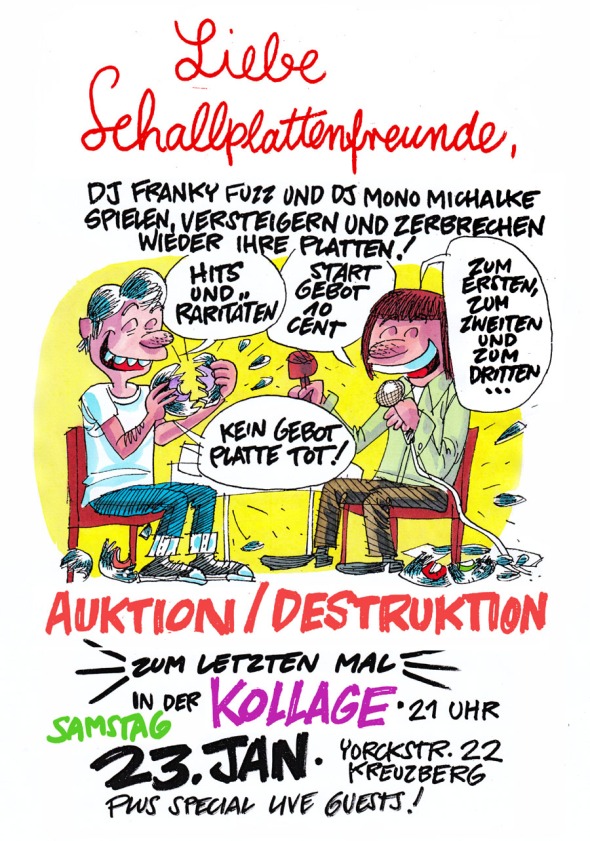 The radio shows were a lot of fun. On Tuesday we talked with Martin, who does Brotbeutel blog, on the phone for 90 minutes. He played some of his weirder music off his blog and in general seemed like a really nice guy. I had never met him and it was a pleasure to talk with someone who had inspired me to start this blog.

Then last week we had Peter Schimmelpfennig on the show. His biography is quite impressive but he is most well-known for producing and managing East-German Rock groups Karat, Puhdys and City in West-Germany in the 70´s and 80´s. Originally from Hamburg, he was a regular at the Star-Club in the 60´s  and then moved to Berlin in 1963 to work for the independent record label Metronome when he was only 19. In the 70´s he started his own record label Pool records. His most successful artist was Georg Kranz. Surprisingly he also made a record with Horst Koch, a re-recording of Lachen called Rocklachen. I only saw the record in the bag of records that Peter brought to the show, but we didn´t get to play it. Now I have to find that record.

Peter Schimmelpfennig also produced the Berlin Rock group Bel Ami. I posted one of their records here. Andy actually got Peter to call up Lutz Walzberg, their original vocalist, in the show. I thought it was a little pushy but Peter assured us that it was okay and that they were still friends after more than 25 years. It was really great talking to Lutz. Altough he is paralysed and tied to the bed because of multiple sclerosis he sounded very energetic. He still knew the Turkish lyrics to Bel Ami´s hit song Berlin bei Nacht (the one I´ve posted) and even started to sing them. Cool!

Before I´ll get to the music, I`d like to announce that we´re doing AUKTION/DESTRUKTION again today, Friday, November 20th at the Kollage, Yorckstrasse 22 in Kreuzberg. Show starts at 10. This time Mario is joining me. We´ll be spinning, auctioning and destroying 45´s again – rarities, hits and total garbage. Starting bids are 10 cents.

AUKTION/DESTRUKTION on Saturday, March 14 at Kollage 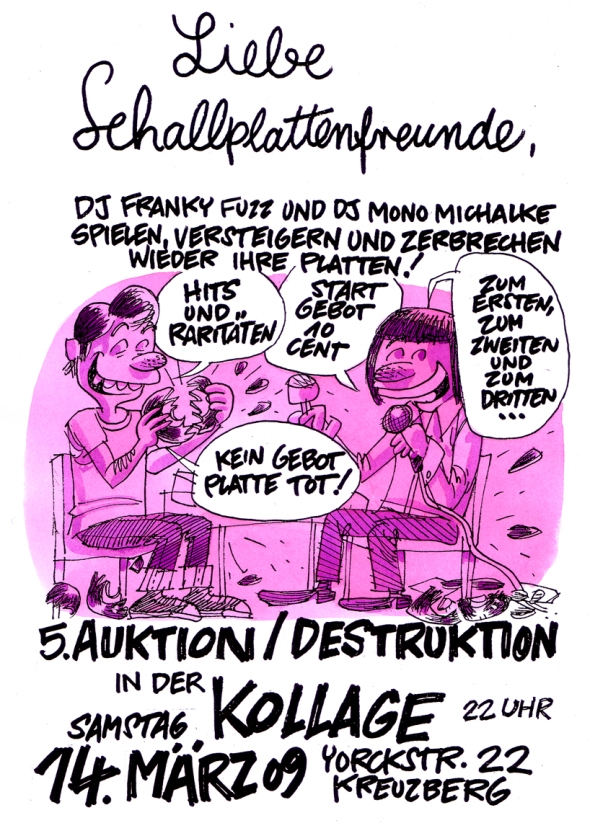 Once again DJ Auktion and DJ Destruktion will be spinning, auctioning and destroying records in our 5th AUKTION/DESTRUKTION happening. We play everything from hits to rare to real garbage. Starting bids are 10 cents and if nobody buys a record we break it right after playing. It`s your chance to get your hands on some cheap records and to see some real bad music destroyed.

Hope to see you on Saturday! 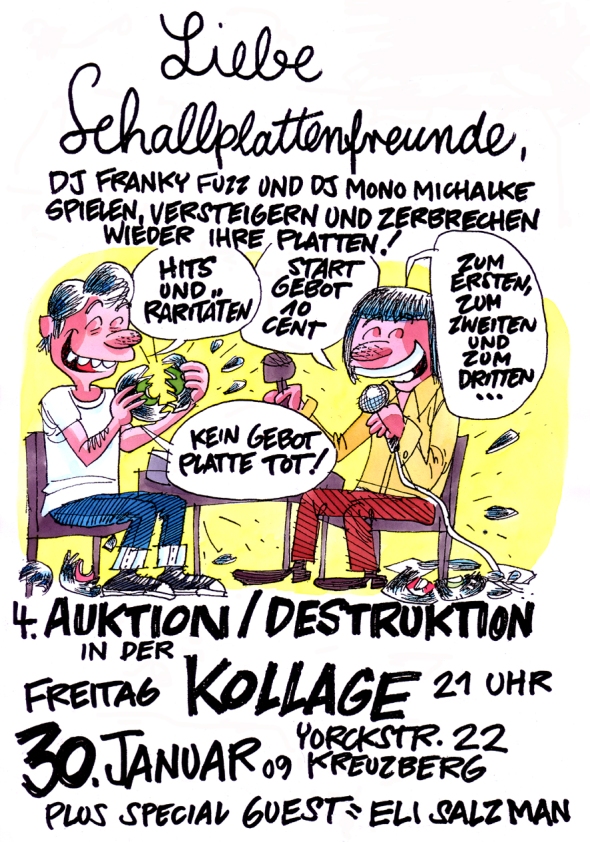 Tomorrow,  Frank and I are going to play, auction and (hopefully) destroy some records again at the 4th auction/destruction happening at the Kollage in Kreuzberg. Performing at around 9:30 will be Eli Salzman from Santa Cruz, California. Come early and listen to Eli.

Or come and look into my box of records so you`ll know what will be auctioned later. I recently bought a whole box (about 400) of  hit records from the 70`s and 80`s at a thrift store in my street. Some great stuff but also real garbage. I`m looking forward to play, sell or destroy some of them next Friday. Frank just got back from traveling over a month in the US. He promised to sell some of the 45`s of that stack of records that he bought in Memphis and Philadelphia. Hope to see you!

If you can read German you can see a new one-page comic about Auktion/Destruktion that will appear in Ox-Magazine next week, on my other site Monovision.

On Friday the 30. of this month Frank and I are spinning, selling and destroying records again in the 4. AUKTION/DESTRUKTION happening at the Kollage in Berlin, Kreuzberg. On the same night we are also proud to introduce Eli Salzman from Santa Cruz, California who is going to perform at aroung 9 p.m. 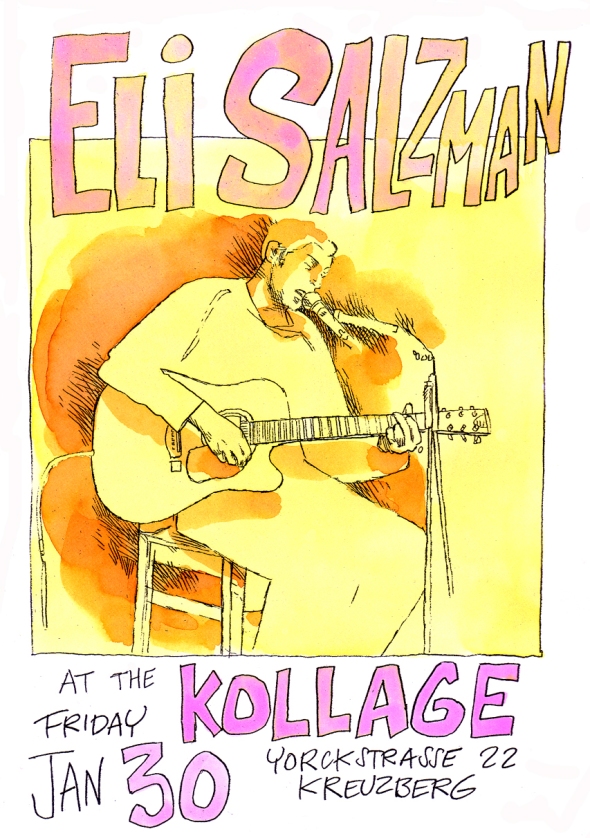 Eli, who just moved to Berlin a month ago, is a singer/songwriter with a great voice and beautiful heartfelt songs. Come early to warm up a bit from the freezing cold outside and listen to Eli Salzman! And then get ready for some record destruction!!!

Last month I made another blog, this time to showcase some of my own, instead of other people`s stuff. I will use it to present my most recent illustration and comics work. It`s called MONOVISION 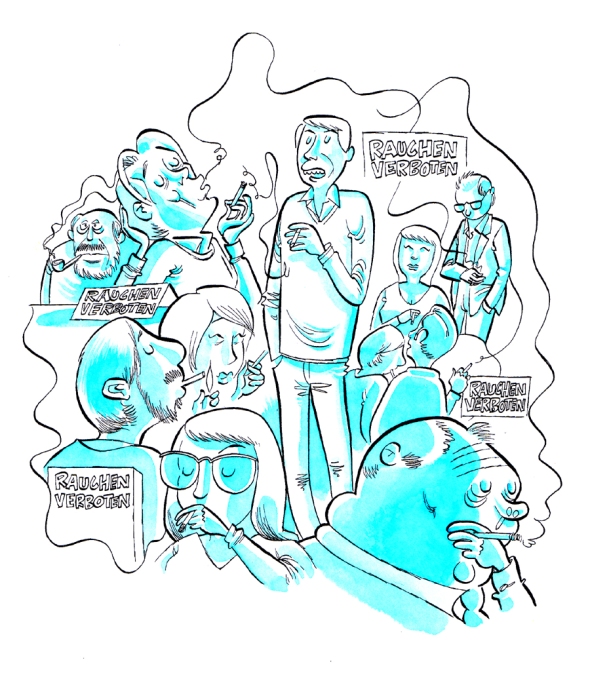 Also I moved some of the comics-related links to that site and added some new music blogs.
One of them is a new Estonian blog about Russian records appropriately called Melodija.

My socialist brother-blog Ostberlin Beatet Besseres is still posting like crazy and great stuff too recently.  Check it out!

I will stay with my weekly schedule.

Thanks to everyone that attended our auction/destruction happening last night! Frank and I had a lot of fun. This time people bid on almost anything and we didn`t get to destroy as many records as I had wished. So instead we made a little money…

Thanks to my sweet girlfriend Julia who made these videos.

A German Telefunken pressing of the THE WAIKIKI`S “Waikiki Welcome” from 1962 is up for bidding:

THE BROTHERHOOD OF MAN`s “Save Your Kisses For Me” saved from destruction for 10 cents:

And yes, it only takes seconds to break one:

Here`s the jingle Frank did for   AUKTION/DESTRUKTION 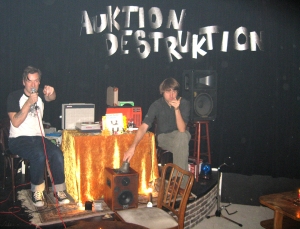 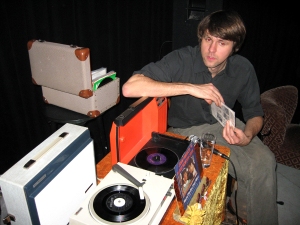 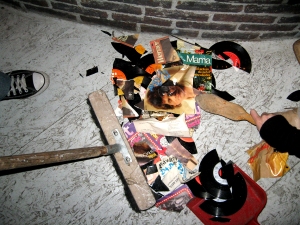 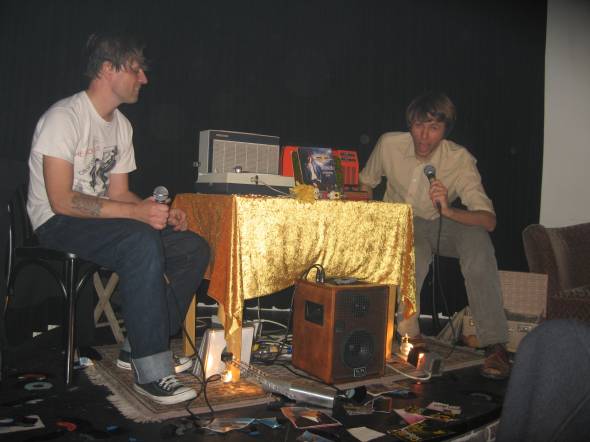 On Friday, November 21  Frank and I are going to DJ at the KOLLAGE , Yorckstrasse 22 in  Kreuzberg.

ACTUALLY it`s much better than that: for the 3rd time this year we are going to play records, auction them off or if nobody wants to bid on them destroy them right away.

We had a lot of fun the last times we did this.  It is kind of liberating to break a record you really hate but also heartbreaking to see one go that might not have deserved it. Some people bid on the worst 80`s records while a lot of awful and some nice ones were destroyed.

So if you are in Berlin come on down to Kreuzberg  to the KOLLAGE, a nice artist/student-type bar. Drinks are cheap and bids start at 10 cents.  We play, sell or destroy some really horrible but also some really cool stuff. 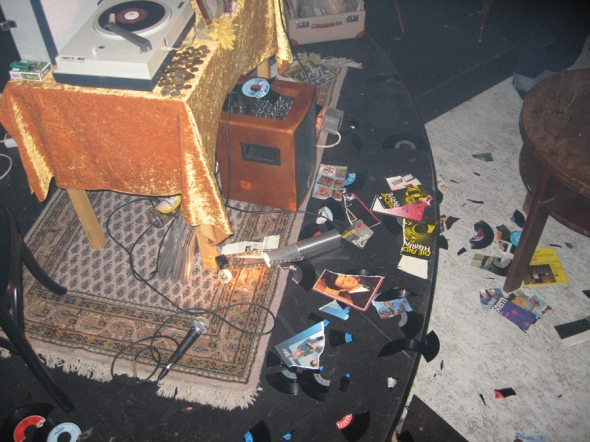 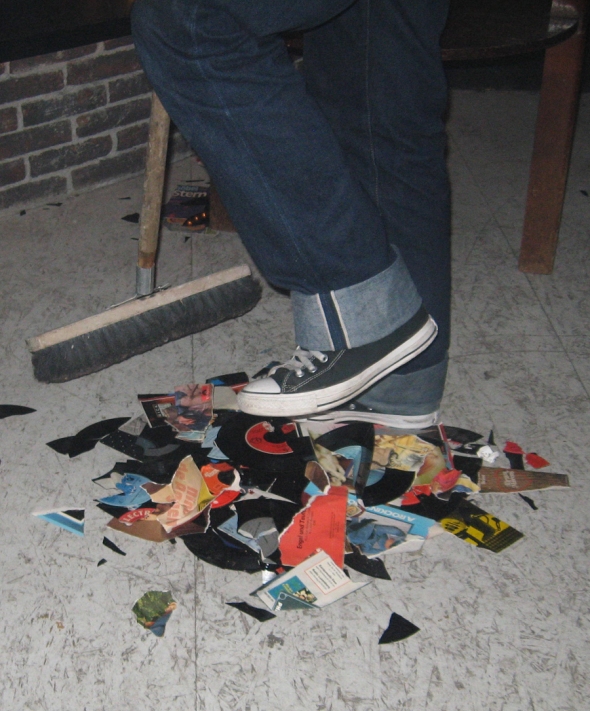