Yesterday Julia and I  returned from our snowboarding trip to the French Alps. We had a great time but right now I still feel like resting. The bus ride back took 16 hours and although the seats were transformed into beds, I still didn`t get much sleep.  But you`ll see why later…

Our vacation itself was great: the sun was shining every day, the ski lift started right in front of our “Chalet” and the food was excellent because the cook was Sebastian, owner of Berlin`s craziest and best Pizza take-out Ron Telesky.

All these years I`ve  had problems adjusting to the people we spent these ski-trips with and this time was no exception. Julia always tells me to relax and not think about the people but there is a certain way people look at me and that irritates me: I`m not used to being observed any more like I was as a teenage Punker. Nowadays I don`t see myself any different from anybody else but that`s not the way people see me. Maybe it`s the way I slick my hair back or the way I dress or maybe I`m only the image of all the snub-nosed, arrogant hipsters they have ever met before.

To contrast that, I`m always very nice and polite to everyone, whereas Julia makes up her mind about most people quickly and then loves to bitch about them and generally doesn`t avoid conflict at all. The guests on these ski trips are mostly in their mid-30`s to 40`s, a lot of them teachers or social workers, most of them couples, some families and some singles. The weirdest ones are mostly among the 40-plus singles: hardened women who don`t take any shit from anyone any more or Julia`s favorite type: guys who “explain the world” to everyone who listens. This time she was surprised, because there were no  “real assholes” to hate with us, but she had everyone eating out of her hands once she brought her “business” to the table.

A while ago she started knitting little wool caps and once she showed them around, people asked if she could make one for them. In the end the sold a total of 10 caps and the (mostly) girls came together for this group shot. If you still need a cap, they are 15 euros each made from real wool and of course you can choose the colors you like.

How different Julia and I react in a group situation became especially apparent on our bus ride home. After the first stop the seats were transformed into beds and we were told that the couples should take the extra big beds. The group we had spent the week with, shared the bus with another group that travelled back to Germany. Julia found us a bed and before I could get to her a woman from that other group confronted her and demanded that she moved over the bed to her because her husband was way too big to be sleeping in the smaller bed next to us. Julia flat out refused and said that we had a right to be sleeping in a bigger bed because we were a couple too. That got the woman really angry and she put her bags on “our” bed.

“The bigger beds are reserved for the bigger people”, she said with a slight Russian accent.

This was kind of weird, because she was not very tall herself, actually she was quite small. All the while they were arguing her big husband didn`t even stick his head out of the lower bunk bed once, that really did seem kind of  uncomfortable. Maybe he was as embarrassed about the whole thing as I was and I  was already half-way on the way to complying.

“Two small people in this bed is just not right! Look at you two midgets!”, the woman said.

When she repeated “midgets”, Julia snapped: “Not if you talk like that!” and “I can sleep here with your stuff still on the bed! We are staying!”

With this she motioned me to move onto the bed. Some other people had gotten in on the discussion and pretty much stood on our side.

The woman said: “Some people are just so inhuman!”, but then more or less resigned to her fate.

In the end they got two separate beds that were probably more comfortable than our bed. Once I had climbed into the bed Julia whispered to me that she wouldn`t let anybody bully her into leaving and that they could go to hell.  It impressed me how hard she had been but still I felt kind of bad and kept my back turned to the couple until they left the bus a couple of hours later. Naturally, I didn`t get much sleep… 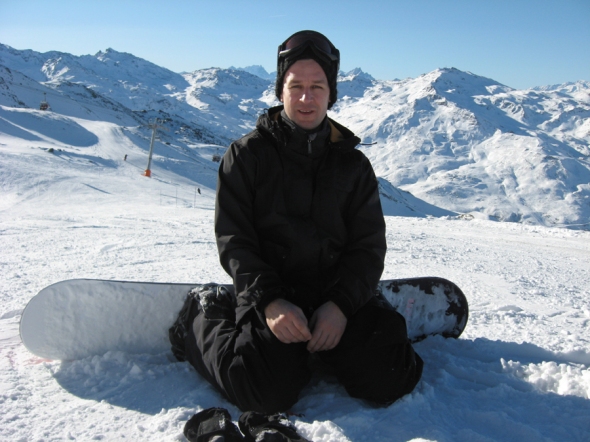 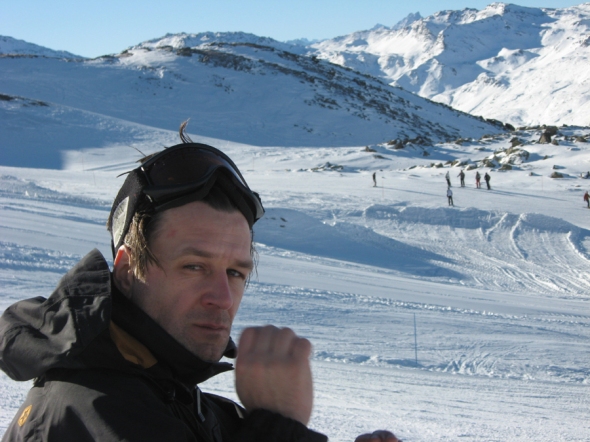 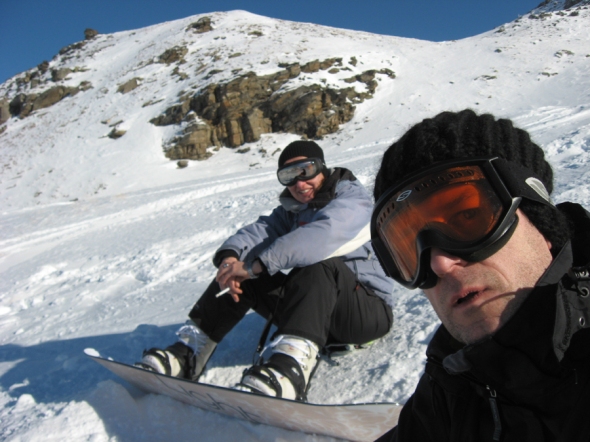 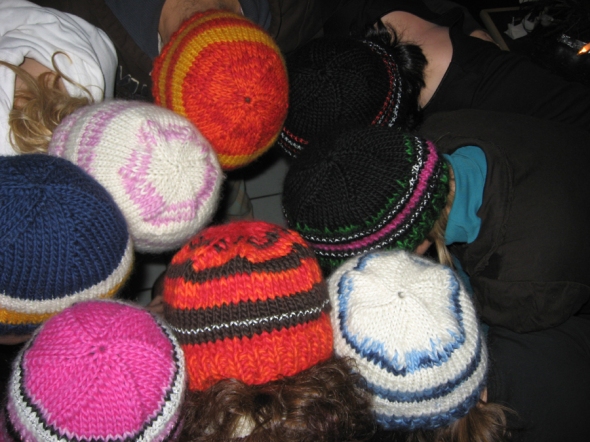 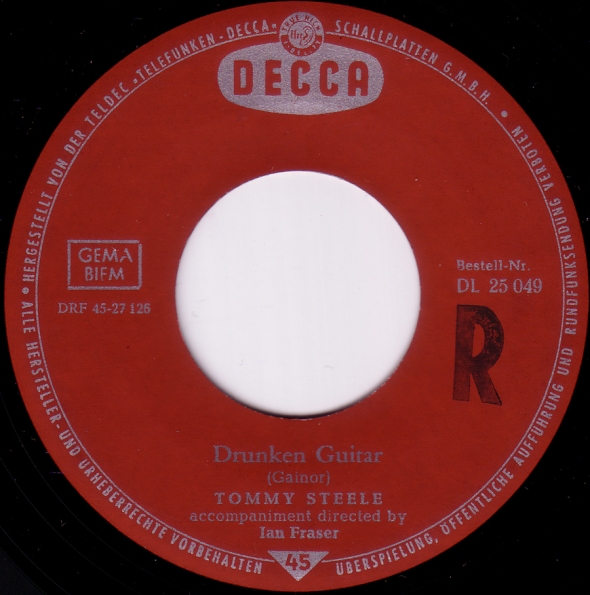 Most of us will probably be drinking a little bit on New Year`s Eve so here are a couple of songs about alcohol. The first one is a great novelty Rock`n`Roll instrumental from 1961 by Tommy Steele.

“Hick!…Give us another offa the bar… `cause I`m a drunken guitar…” 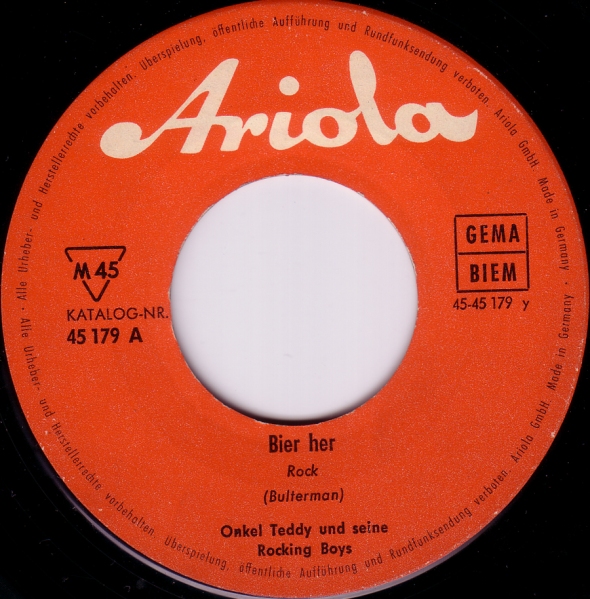 Actually this song was on a record that I sadly failed to rescue from destruction, last time Frank and I did AUKTION-DESTRUKTION. Somehow nobody bid on a compilation EP with German drinking-songs “For Adults only” that Frank put up for auction. So Frank eventually had to break it.

Anyway, here`s Uncle Teddy and his Rocking Boys singing “Gimme beer – or I`ll fall over!”.  Although the lyrics go so far as to threaten to “topple the whole bar” if they don`t get beer right away, it sounds more interesting on paper than it actually is. Given the German love for beer the idea of a Rock´n´Roll band doing a drinkin song seems only natural. Only Uncle Teddy and his Rocking Boys are not a Rock`n`Roll band. That is not to say that the song is not interesting and as you`ve come to expect on this site: who cares… 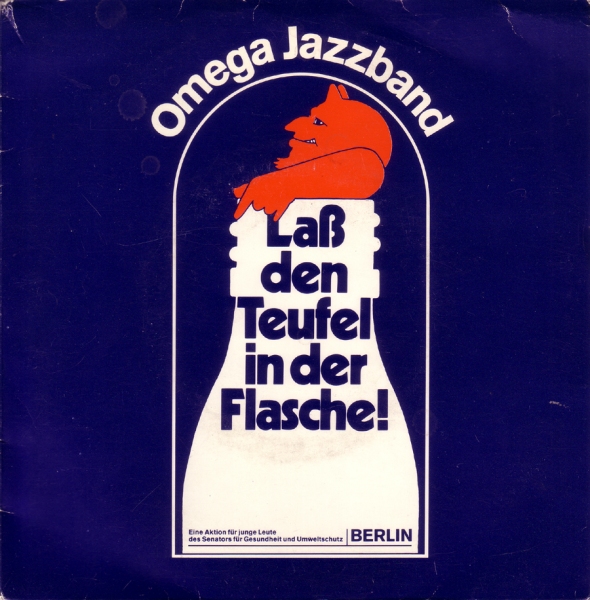 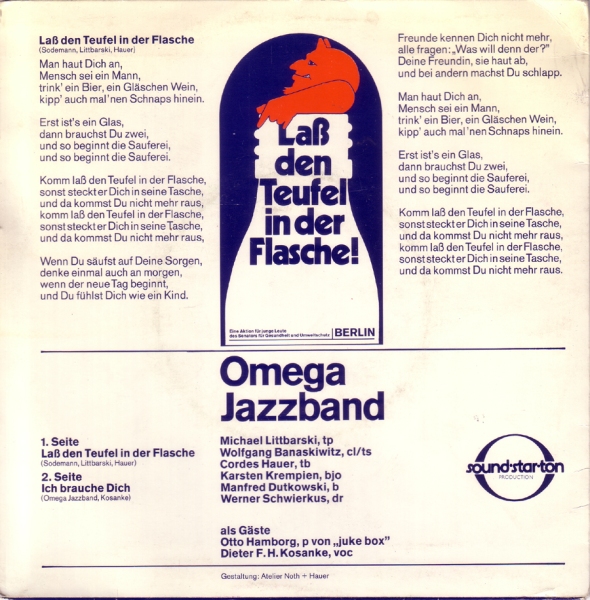 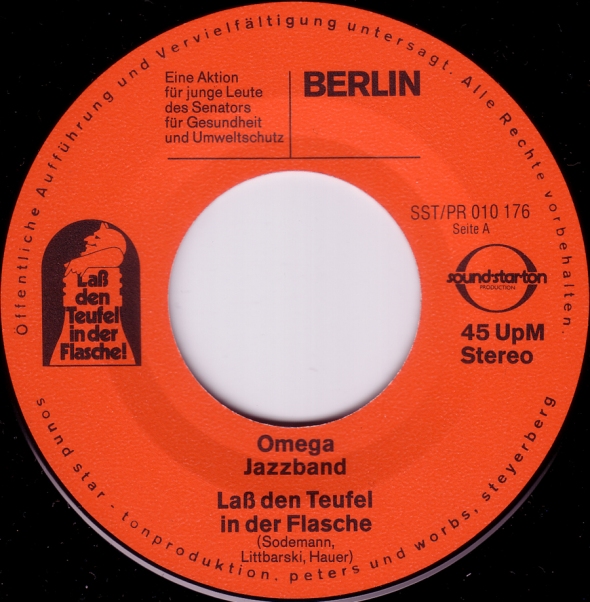 My personal favorite of the batch, The Omega Jazzband doing a Straightedge-Jazz-song: “Lass den Teufel in der Flasche” ( Leave the devil in the bottle! ). This record was issued by the City of Berlin warning the youth of the dangers of drinking. What a brilliant concept  to reach young  Berliners: playing Old-Time Jazz… 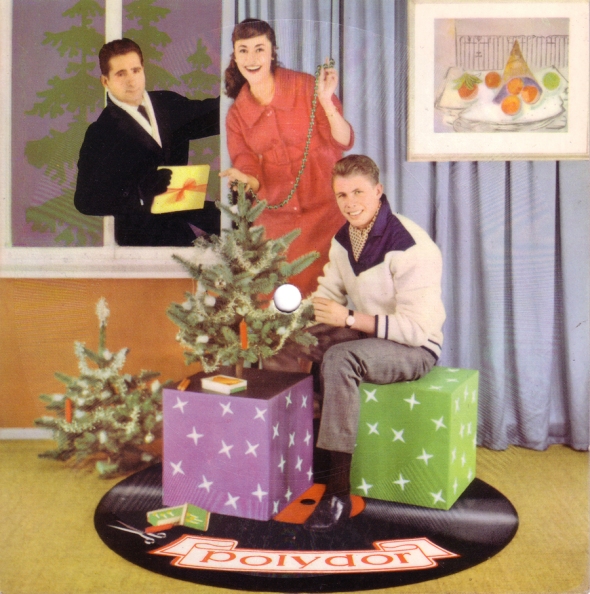 I would like to thank everyone who visited this site  in the past year and especially the ones that cared enough to post a comment or wrote me a e-mail. It`s the only gratification I get for doing this and it means a lot to me.

For years most of my friends and colleagues had thought of me as really old-fashioned:  I didn`t have a cell-phone ( still don`t), didn`t write e-mails and didn`t know how to use a computer. Last November Mawil and Caro, two fellow cartoonists, told me how easy it was to do a blog so one afternoon I just gave it a try. Once I started to write this blog everything changed and now I`m addicted .

Contrary to most other bad habits I still enjoy this addiction and writing and presenting all this stuff . This blog is the only place that I have for doing something creative with my other more serious addiction that I`ve had since I was a kid: collecting. Some records I can play when I dj from time to time, but most of the stuff  I post here is not fit for that. Just like this one here: 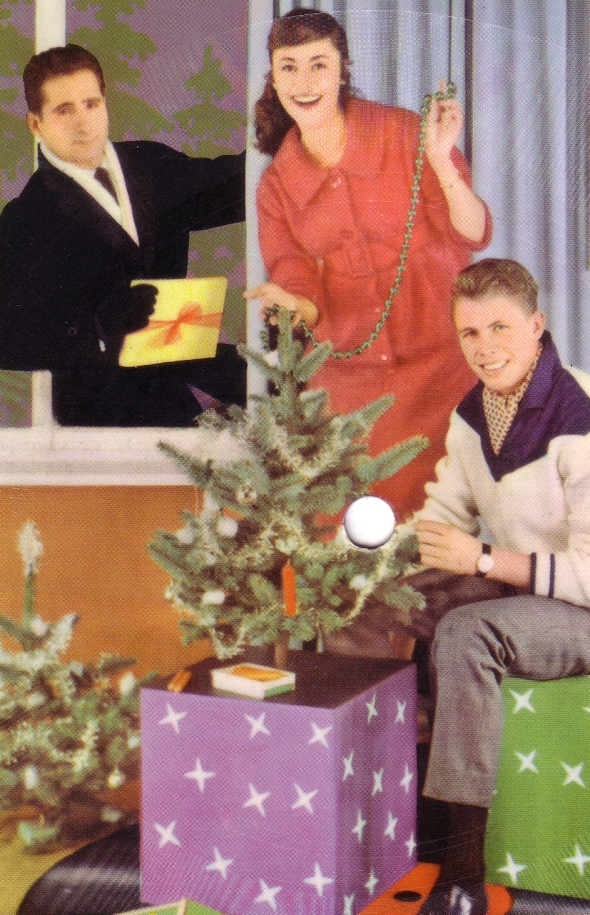 This flexible postcard record was a advertisement given to Christmas shoppers urging them to buy Polydor records. Freddy and Caterina Valente are not even on the record and the Peter Kraus one is so boring that I cut out all the music and exchanged it with some bits of some of my favourite songs that I posted here this past year.

This is my favorite Rock`n`Roll Christmas song right after Elvis`s “Santa Claus is back in town”. I love Santo & Johnny and if you find any of their records I highly recommend you to buy them. 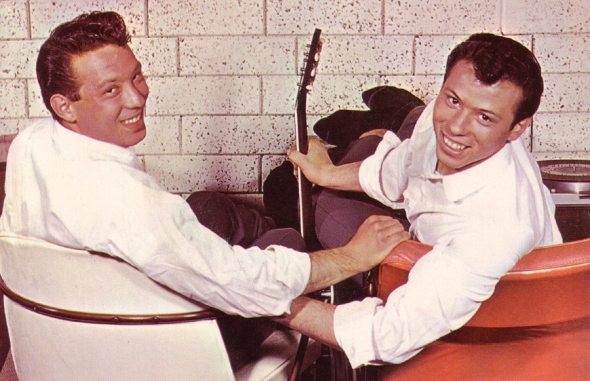 While not all of their music is Rock`n`Roll and is venturing into easy-listening-land they have a beautiful guitar sound on all their records.

A couple of years ago my girlfriend talked me into trying out snowboarding and I`ve been hooked ever since. Next week we`re going to the French Alps again together with a bus load of other Berliners. Being with 30 strangers in a house for a week is not my favorite set-up but there are always some nice people and  being on top of a mountain, the fresh air and then snowboarding is just awesome.

So here are a couple winter-sport related records. This French Ep has four tracks made for “Après-Ski”-listening in a small Swiss “Stübli”, munching “Fondue” and drinking wine.

Of all places, I found this soundtrack to the film “Winter-A-Go-Go” nine years ago in Thailand. It has a green stamp with some Thai writing on the sleeve.

Sadly the record didn`t take too well to the Asian humidity, so the record and the jacket are not in good condition but the sound files should be listenable. 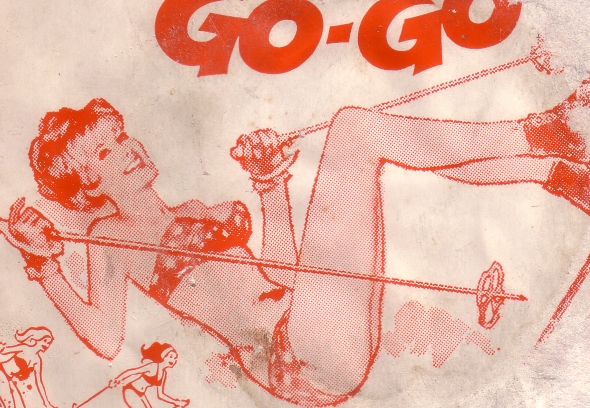 The music is like surf music only the lyrics center around skiing instead of surfing.  The title track “Winter-A-Go-Go” is performed by the Hondells.

So let`s go-go in the snow-snow…

I bought this a couple of years ago in Luzern while I attended the “Fumetto” Comics-Festival.  One day I took  of early in the morning from the youth-hostel where I was staying and spent a couple of hours in a “Bücher-Brocki”, a huge second-hand book store where locals bring their old books to retire. 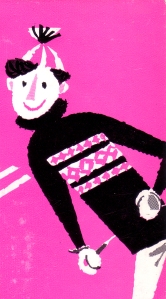 Of course I bought this record for the cartoon sleeve and the music on it is not so great. Apparently the songs were the winners of a ski-songwriting contest and are all in Swiss-German dialect that I do only understand partially. The song “Mach Ka Böge” (Don`t do swings) challenges the skiiers to not do any swings but to always ski straight down and fast!