On April 13 Werner Voran passed away. He was 58 years old. Werner was a musician, artist and record collector but also the main man behind a series of compilations called Prae-Kraut Pandemonium. These comps are the German equivalent to Crypt Records´very influential Back from the Grave Garage-Punk series. Back in the early 90s, when most German Beat Fans were still focused on mainstream “Oldies”, Werner and his collaborators  dug up the lost sounds of the German underground of the mid to late 60s, the pre-Krautrock era. The Prae-Kraut series basically put that sound back on the map! Or rather they created this sound and made it cool to listen to. It was their achievement to let a whole new generation of music fans discover the often crude sounds of German amateur Beat bands.

Of course the fact, that it was a bootleg series, contributed to the cool factor. But mostly it was the selection of songs – the way they put disparate songs together, that did not have any connection with each other, but made sense in the context of the compilation. It was Werner´s and his friends own punk attitude and their collector spirit that fueled the series. In terms of pure cool and consistency the Prae-Kraut comps remain unparalleled in the history of German re-issue series.

When releasing LPs became too expensive the series continued in digital format. Starting with Volume 16 in 2008. Prae-Kraut was released exclusively as RAR files trough Spurensicherung Blog. A fitting name:  the way they presented their obscure finds, was like a “securing of evidence”. I felt quite honored, when Werner used one of my scans from a German comic book called Lupo, that I had posted  in May 2008, for the virtual  “cover” of Volume 17.

The compilation can still be downloaded from Spurensicherung. 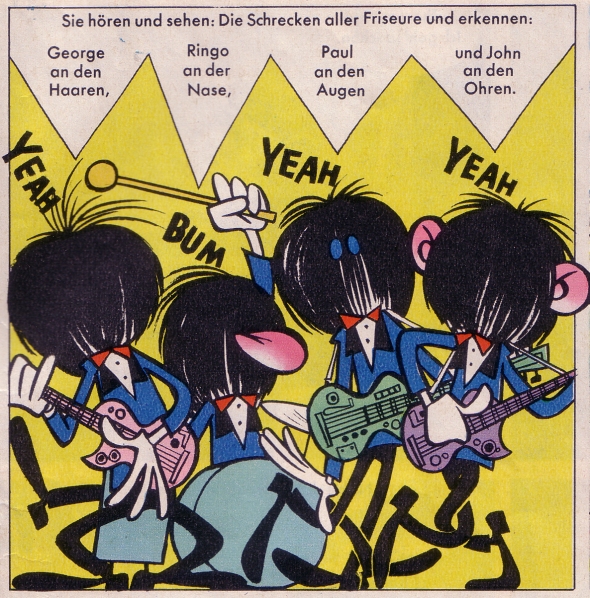 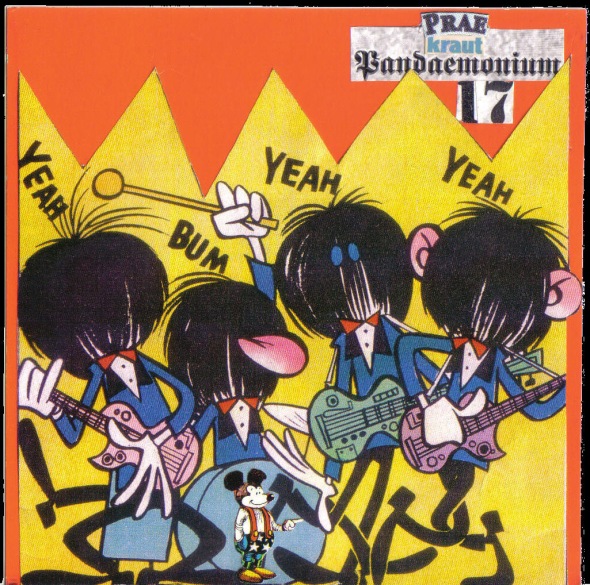 I never met Werner personally but we emailed a bit and he occasionally commented on some of my posts. Last September, when I hastily announced a new set of blog ethics, Werners´reply was straight forward, determined but also very inspiring:

“Problem understood. I was often close to packin´ it in too. It´s hard too keep your self control, when you get called a “Bootlegger”, by people who don´t have a clue. When actually you are an archeologist who has been digging up untapped treasures, thereby virtually “creating” a fucking “MARKET” for stuff that nobody had cared for, for decades! But that was still in the days of vinyl. At least today I don´t loose money any more. But I’m too old to quit anyway. Thanks for the great time. Rest in unrest. Yours, Lolly P.”
Rest in unrest, Werner!
——————————————————————————————————————————————
On to the music…
Just last week I found this 45 by Andy Nevison in a local record store and I think it fits the occasion. It wasn´t as cheap as the finds I usually present here, but the record is in excellent condition and it was still nowhere as expensive as it would have been, if I had to bid on it on  on Ebay.
Andy Nevison appeared on Prae-Kraut Pandemonium numerous times: “Indiano” is on Vol.2 (1994),  (and on the CD-Version “Electric Loosers”), “White Woman” is on Vol.14 (2003) and “Shaking It Up” is on Vol. 17. (In 2004 Bear Family Records included “Indiano” and “What’s Your Name” on their Beat im Ruhrgebiet CD comp. Wrongly titled “Indiana” the song also appeared on the CD The British Sound Vol.11.)
Andy Nevison undoubtedly recorded the most authentic sounding Rhythm & Blues songs in Germany in the 60s. Here´s what Werner wrote about “White Woman” in the liner notes to Volume 14 in his inimitable style:

“We all know about The Monks, but they weren’t the only ex-GI’s on the German scene. Screamin’ Andy Nevison (whose throat might sound familiar to owners of our Vol.2) and his Westphalian band The Rhythm Masters had German and American members and their three 45’s were produced exclusively for the German market. “White Woman, don’t roll your big blue eyes at me” wouldn’t have been much of a hit in Alabama 66 anyway. Blessed with good looks not unlike a younger brother of Sam Cooke, Andy honours sister Rosa with more than just innate seat on the bus. Say it loud, I’m black and kraut. Dig it!”

Just because your skin is white, you think you´re mighty fine/ Yes, you told me that you love me, then you rolled your big blue eyes/ When I saw you last week, your skin was turning black/ Go find the guy that beat you up and ask him to take you back/ Don´t roll your big blue eyes at me… “

( I´d love to get the rest of the lyrics but I can´t understand what he´s saying. Any volunteers to translate these exceptional anti-racist 1960s beat lyrics?)

Andy Nevison was born to Jamaican parents and grew up in London. Like many young British musicians in the 1950s, he started to play music in a skiffle band. During his military service he was stationed in Gibraltar, Cyprus, Malta and Germany. Based in Delmenhorst, he often traveled 130 kilometers to Hamburg, to perform in various clubs, together with musicians like Tony Sheridan and Gerry & The Pacemakers.

In the early 70s he settled in Recklinghausen and became a fixture in the local music scene playing Blues, Jazz and Rock´n´Roll. In 2006 Andy Nevison and the Recklinghausen All-Stars recorded the CD “Wakado”. Shortly after local occasional journalist Ulle Bowski did an interview with Andy Nevison on his balcony.

(There is no Wikipedia text about Andy Nevison but Guido Röcken wrote a very nice biography and obituary in German on his website.)

ANDY NEVISON & HIS RHYTHM MASTERS, Shaking It Up, 1964
Werner about “Shaking It Up”,  reissued on Prae-Kraut Pandemonium Volume 17:

“ANDY NEVISON & HIS RHYTHM MASTERS: their 3 hard to find singles for major labels have already been well documented on Prae-Kraut. But that’s not all there is to the career of this black ex-GI in Germany. A big surprise – and a 7″ the man himself had forgotten about when asked these days – is “Shaking It Up” on the totally obscure Tampicord label from Hamm, Westfalia (’64). Certainly a band in progress, and not up to the monster standard of “Indiano”, but a good example of the early sound of the German red light districts on the wrong side of the tracks. On par with King Size Taylor and Bobby Patrick. For those of you who care: Andy Nevison had a 5th and last single (the only one without The Rhythm Masters) on the German label R+B in ’67. This was a novelty German version of Ray Charles’ “Busted” called “Pleite” b/w “Worried Blues”. Funny, but not much more…”

Most people will probably only shrug their shoulders when they hear these songs, but to me this record seems almost unreal. It´s like this record was made for Berlin Beatet Bestes and on so many levels!

1. It is an advertisement record,

2. It was privately pressed for a Berlin car dealer

3. It´s got a cartoon sleeve

4. The two  risqué songs are sung by local Berlin star Brigitte Mira, an actress who frequently worked with Fassbinder

5. The music is in sort of a Dixieland Jazz style

What more can I ask for?

In a way these two risqué songs, backed by Heinrich Riethmüller, predate Brigitte Mira´s bold later work. For some unknown reason the Berlin car dealer Bunde had the idea to advertize for his business with some naughty songs. Some sleeves even had “Der kesse Gruss vom Autohaus Bunde” ( Naughty greetings from Autohaus Bunde) stamped on the front. You can see this stamp on a copy that some greedy person is trying to sell on Ebay for the ridiculous amount of 35 Euros.  Of course nobody will ever buy it. Listen to the songs and you´ll see why. Last week I paid less than 50 cents in a thrift store and I think that´s  much more appropriate. Most likely it was the name that got the seller to put a higher price tag on this record.

Brigitte Mira (1910-2005) was most famous for the work she did with Rainer Werner Fassbinder. It was Fassbinder´s genius to cast people like Brigitte Mira for his art films. She had been  a popular German actress since the 1940s, but was mostly known for her comedies. Mira´s personal courage made her steer off the beaten path and towards serious, more challenging roles, like in Ali:Fear Eats The Soul (1974).

Despite her adventurous career, in the eyes of  the majority of the German public,  Brigitte Mira remained „the archetypal funny old Berlinerin with a heart.” (The Guardian). But in the 70s Brigitte Mira basically had two careers, appearing in cutting-edge art films and also starring in funny popular films and on television (most prominently in the series Drei Damen vom Grill).

Die alte Clofrau translates to “The Old Toilet Lady”. In the song she tells the story of her life as a bathroom attendant. A blues song about how she flushes the toilet for the very last time…

The artwork of this record is not signed. I have a vague suspicion who could have done it but so far I can not put a name to it.