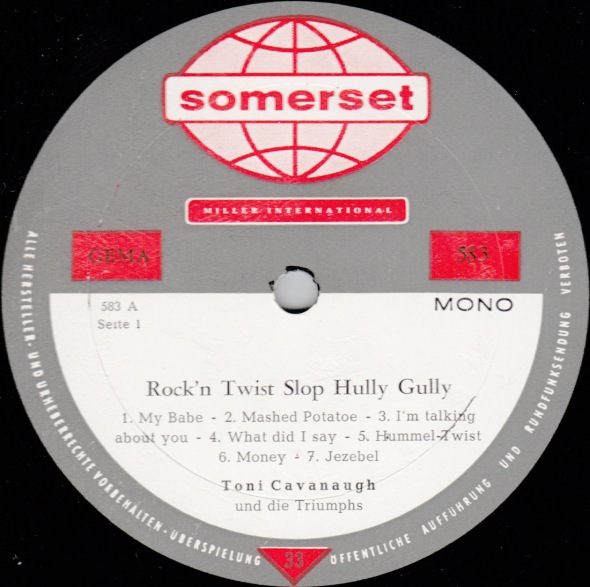 Actually this is almost too good to be posted here. It´s  a fantastic LP and I was surprised when I searched for it on the internet and found, that it has never been re-released (apart from Hummel-Twist that appeared on a bunch of comps such as the Beat on The Krauts Im Star Club Hamburg LP Vol.2 that Dionysus/Romulan re-released in the 90´s and on one of Bear Family´s  Tausend Nadelstiche CDs) at least to my knowledge. There´s no reason why this music should not be heard by as many people as possible. But please let me know if I´m wrong. If this ever saw a proper re-release,  I´ll delete it immediately. This album definitely deserves one. Posting music of this caliber (and format!) will be an exception here and I´ll return to my usual beloved garbage pickings next week: the music that doesn´t need to be heard by as many people as possible…

I bought the album 10 years ago in pretty excellent condition (so please take the time to look at my supersized scans) and initially I only wanted to post one track of it , Hully Gully, because Troy pointed out in one of his recent comments that the Hully Gully song seems to have been a trigger for violence when played in the Beatles Star Club era. Toni Cavanaugh´s version is pretty free and wild and has some lightning-fast guitar breaks but it´s not a very aggressive song. The wording “Halli Galli” however, directly derived from the Hully Gully dance craze is still used in Germany. We say: “Da is ganz schön Halli Galli!“, like, there´s some action  going on! Mostly it´s positive but it could also mean a quarrel. Toni Cavanaugh´s Hully Gully  is one of the wildest Hully Gully songs I know:

We´ll what about this outbreak of violence when Hully Gully was played? I don´t know these things, I was born in 1966. I did however grow up in  Hamburg right by the Alster, the beautiful lake that lies in the center of the city. My father and my mother went to the Star Club on one of their first dates. I´ve been living in Berlin for 13 years now and I love Berlin but Hamburg is my home town and will always stay close to my heart. I´ll always be a Hamburger.

Toni Cavanaugh (Orlester Watson Cavanaugh) was born in Indianapolis in 1939 ( the year my mother was born). He landed in Germany in the late 50´s as a US paratrooper and was stationed near Mannheim but soon found himself entertaining the troops on various stages around Germany. After his military time he ended up in Hamburg in the blossoming rock´n´roll scene on the Reeperbahn. In 1960 he was drumming in Tony Sheridan´s group the Jets for a while, who were playing the Top Ten club regularly. He also played with Tony Sheridan in the Star-Combo, kinda the house-band at the Star Club from 1963 to 1964.

In 1962 he had his own group, the Bats. 1964 saw the release of this LP Rock´n Twist Slop Hully Gully with the Liverpool Triumphs.

Side 1 starts of with a rousing versions of

I´m Talking About You

and a fast saxophone-driven version of  What I´d Say.Hummel-Twist is Tony Cavanaugh´s most well-known song, likely because it was the only one sung in German on this LP. Hummel Hummel Mors Mors is a very old greeting of local Hamburgers. As legend has it, Hans Hummel was a poor worker, a water carrier in the 18th century, who was always teased by little kids, so he replied: “Klei di an´n mors!”(kiss my ass). The greeting is a call and response thing. When I was a kid and we were on a family trip, me and  my brother used to look for passing cars that were also from Hamburg. When we found one, we´d scream “Hummel Hummel” and sometimes they would scream back “Mors Mors” to our greatest delight.

Side 1 ends with a version of  Money that sounds similar to a lot of  versions from Star-Club groups, BUT this has a great drum and saxophone sound! This sounds like it was recorded live and it was!

Side 2 starts with Jezebel,

then the aforementioned awesome Hully Gully, Slippin´and Slidin´ (again wrongly titled We are slopping. Yea, there are a lot of mistakes on this record…),

and a funny little number called Twiullyop, a mix of the words  twist, hully gully and slop. Otherwise a pretty straight beat stomper:

The album closes with a soulful rendition of  Tell Me, Baby.

In 1965 Toni Cavanaugh got a deal with Teldec and recorded four songs in German backed by  the “Beat Brothers”, among them Kingsize Taylor, Howie Casey and some members of the Blizzards from Stade, a small town near Hamburg.

Toni Cavanaugh continued to play with various groups in Germany  into the 70´s, but finally went back to the states, leaving the music business behind altogether. He died in a nursing home on November 5th,  2005.

Like other African-American expatriate  rock´n´rollers such as  Rocky Roberts in Italy and the great Harold Nicholas in France, Toni Cavanaugh left some very fine recordings in Europe. It´s time that they are paid a little more tribute to.

If you liked these Hully Gully songs and are too lazy to download every single one  go to Michael´s Mostly Uncomped blog. He collected the best ones I posted here and added some others and made a nice Hully Gully compilation.

Here is some nice organ driven instrumental music. Save yourself the 20 bucks to buy this on Ebay here…

How could I forget to post this? Hully Gully Firehouse is  one of my favorite Hully Gully songs!

Harold Nicholas was an African-American expatriate who moved to France in the 50`s. Together with his brother he appeared in various European movies among them the German musical Bonjour Kathrin(1956) with Caterina Valente. Later he played along with Eddie Constantine in the French detective-movie parody “L’empire de la nuit”(1962).

But before he came to France he had already been hugely successful in the States. Together with his brother he had performed as the famous tap-dancing Nicholas Brothers since the late 30´s. Here`s a video of their most famous performance in the film “Stormy Weather”(1943) together with Cab Calloway. Watch how they jump way off the piano and land in splits:

Born in 1921 Harold Nicholas was already 42 years old, when he recorded these songs but you would never know. This sounds totally fresh and dynamic and he must still have been one hell of a dancer. His French is very good too and for the longest time I couldn`t make out where the slight accent was coming from. I don`t know if  Harold Nicholas recorded more than these handful of songs in the early 60´s. He sang Jazz in later years.  Only a short time after he moved back to New York Harold Nicholas died of a heart attack in 2000.

This is a German release on the Ariola/Barclay  label and the songs are different than on the French Barclay EP that you can see here.  Hully Gully Firehouse is great soulful Rock`n`Roll with a great guitar!

HAROLD NICHOLAS, Personne que toi (Nobody But You), 1963

As you might notice, this week`s theme is the Hully Gully dance craze that came right after the Twist and the Madison and the Slop and all the other dance crazes of the early 60`s. Here are a couple of Rock`n`Roll, Beat, Pop and Instrumental songs all disguised as the Hully Gully. 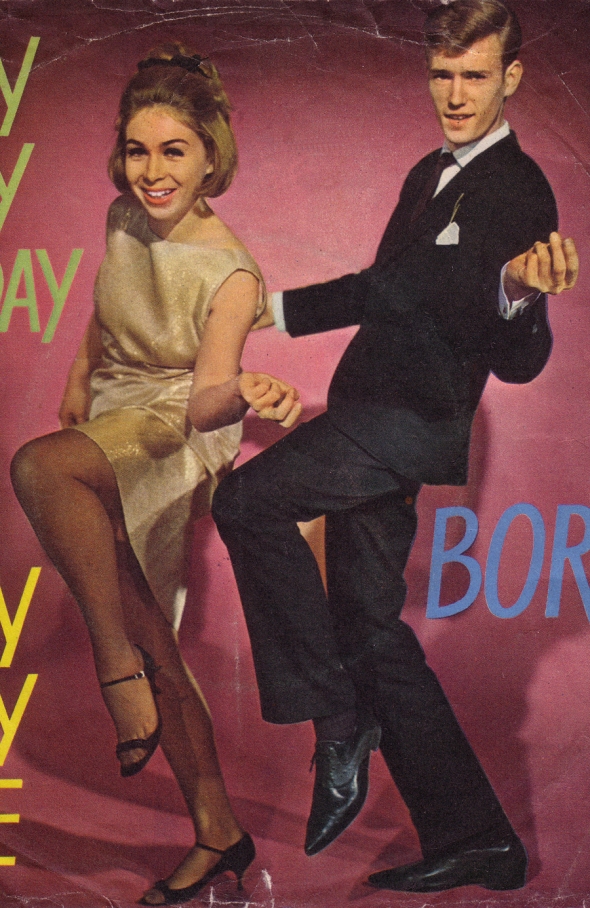 Hully Gully Holiday was a hit in Germany for Charly Cotton and his Twistmakers and I guess a minor hit also for Boris.

This British duo played at the Star Club and released this nice 45 for the German Vogue label. The Hully Gully is the theme but I think  Shake the Piano is the better song here… 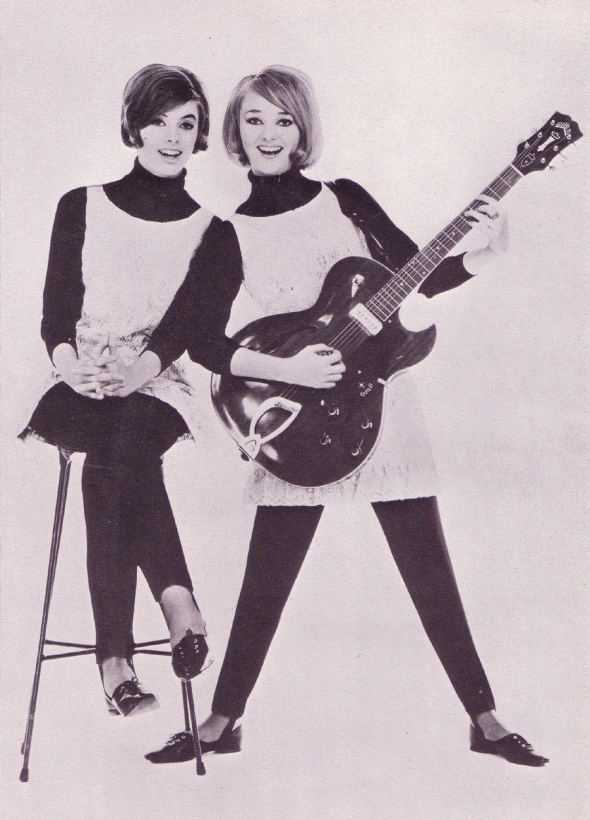 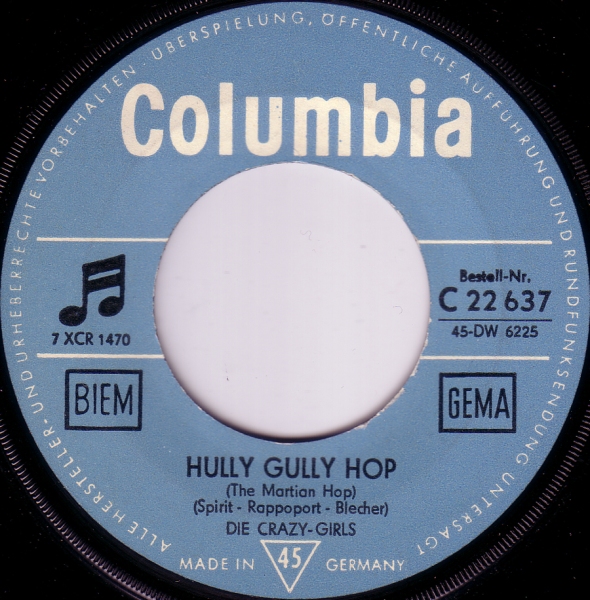 This is a German version of the novelty hit The Martian Hop by the Ran-Dells. It has the same Doo Wop and sound-effect elements and lyrically it also stays close to the original: the girls take a rocket to Mars and discover the Martians are doing the Hully Gully…

Now  what kind of music might be on this record? Gianfranco Intra and his orchestra backed Betty Curtis on Al di là in the Eurovision Song Contest in 1961. That`s about all I found out.

Hey Michael, how`s the weather in Milano? Can you find more?

I couldn`t find anything about Ronnie Dixon but the group sounds very much like the German group Fats & his Cats. Midnight Kisses is good too, mixing German and English lyrics…