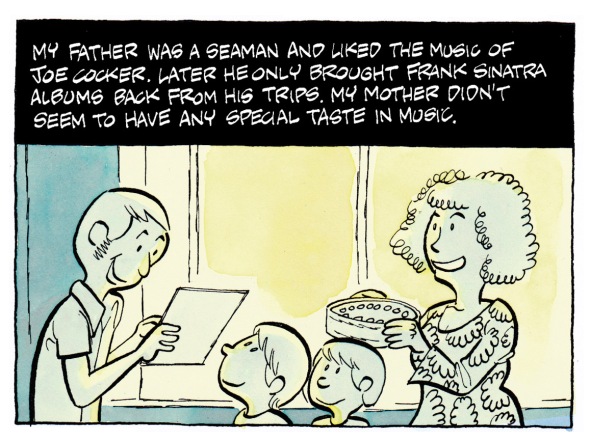 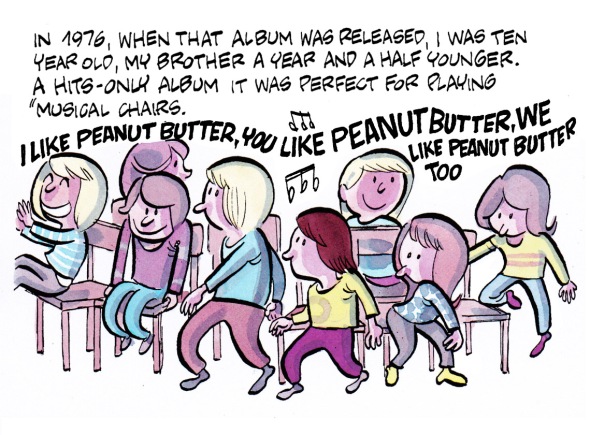 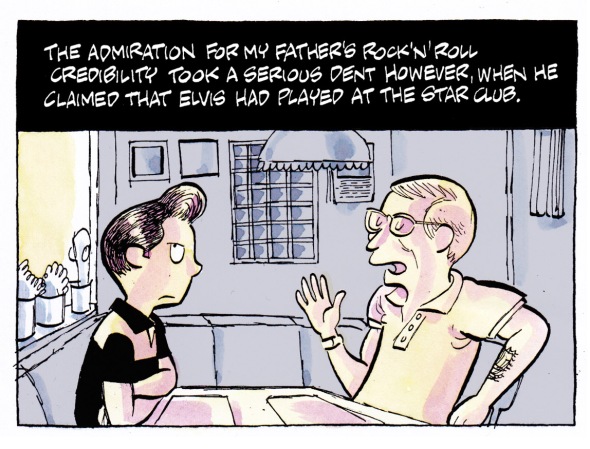 After caring so much about the works of other artists here, I figured it´s about time I  also showed  some of my own stuff.  Eine deutsche Version dieses Comics findest du hier. 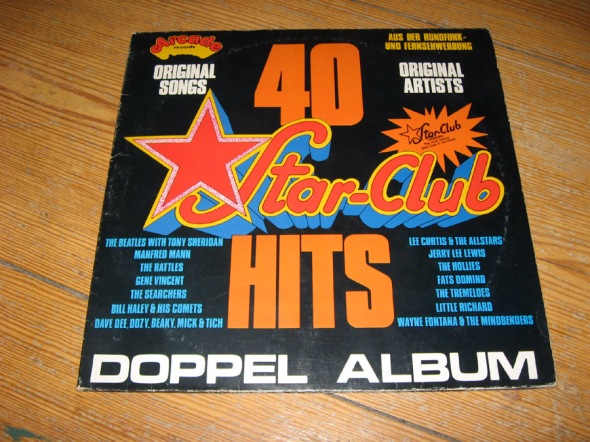 This album is probably the earliest Star Club re-issue compilation. All the groups featured on it have played at the Star Club, but only a few are live recordings like Little Richard´s Good Golly Miss Molly.  It´s nothing compared to “Jerry Lee Lewis live at the Star Club” ,  still one of the best rock´n´roll live albums ever recorded. That album has been re-issued recently on 180 gr vinyl by Bear Family Records. Yeah, Bear Family is finally doing vinyl again! If  you´re a rock´n´roll fan and if you don´t already own it, get it now. It´s one of the albums that you can take to your grave. 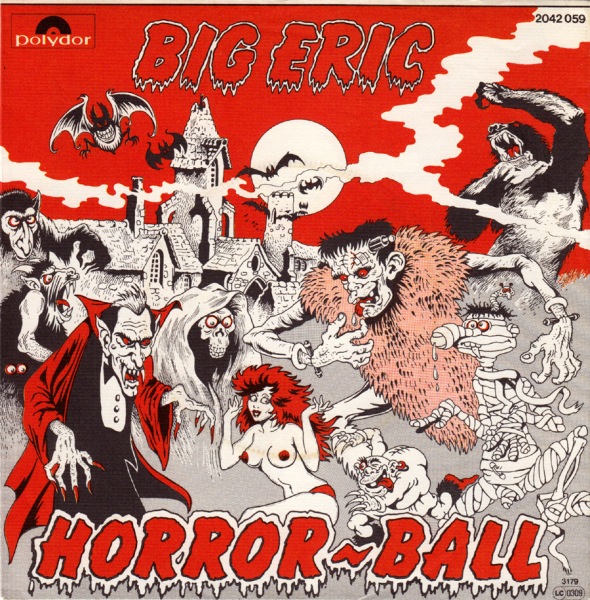 As promised last time, more bad records.  Yea, I know, you don´t come here for disco musick, but I happen to like these songs.  And actually they´re not bad, they´re horrible! What other record makes you wanna dance and laugh at the same time? Now, that´s perfect for the next  Halloween party.

And all my favourite  monsters take part… 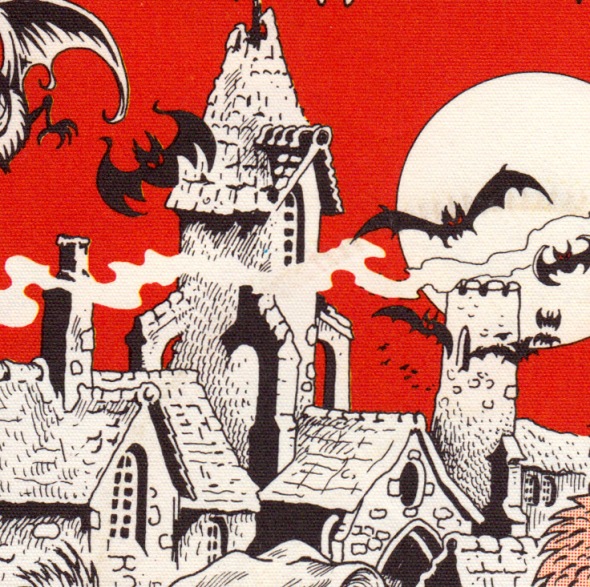 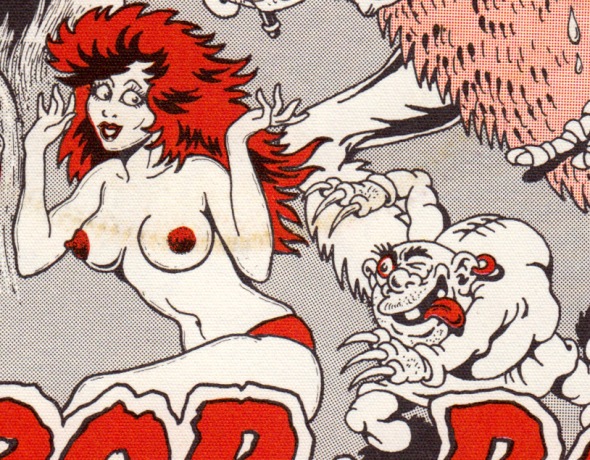 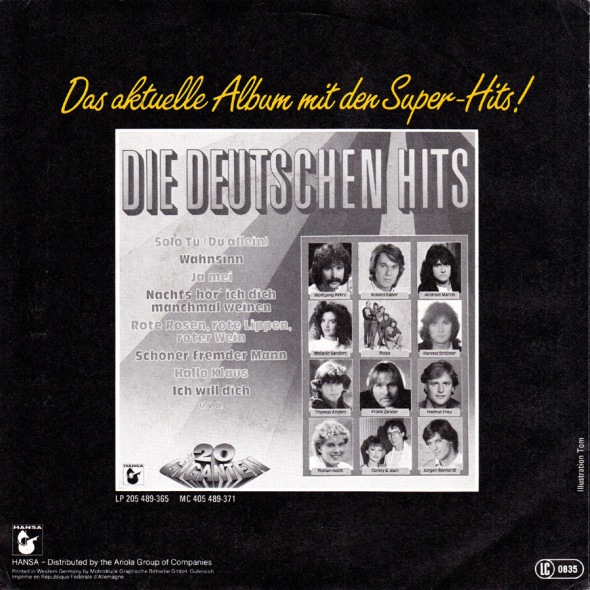 Just because I know you love it so much, here´s more disco. I have never been to university, but I guees if your´re a student, it´s perfect.  Disco, die neue Wissenschaft (disco, the new science) is about a disco university where all the subjects are disco-related. Universität, actually the a-side, is about college life. 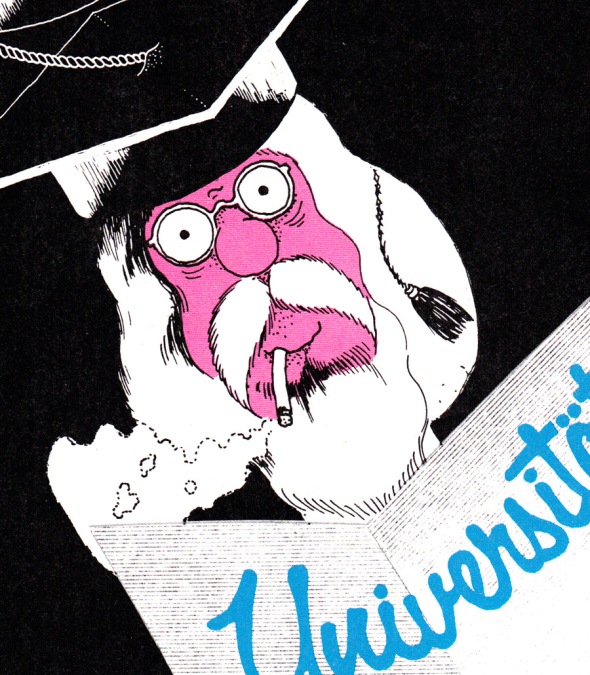 “No cult records” was what I promised last time but Rosy Rosy  is as  close as it gets to a German cult artist. However, this record has never been re-released as far as I know, so I guess I´m still true to my guidelines.

I haven´t read any of her autobiographies, this is just translated from her German Wikipedia, but her credentials are as cool as you could get in Germany at the time.  The cult group “The Inner Space” shortly developed into Can. Their complete output has been re-released last year on CD and 180gr vinyl by Wah Wah Records.

In 1981 she wrote the lyrics and the music to these two introspective songs,  produced by Achim Reichel of Rattles fame. A little bit on the Nico side of singing she reflects sarcastically about her role as a sex-symbol.

And what a hottie she was and I bet still is… 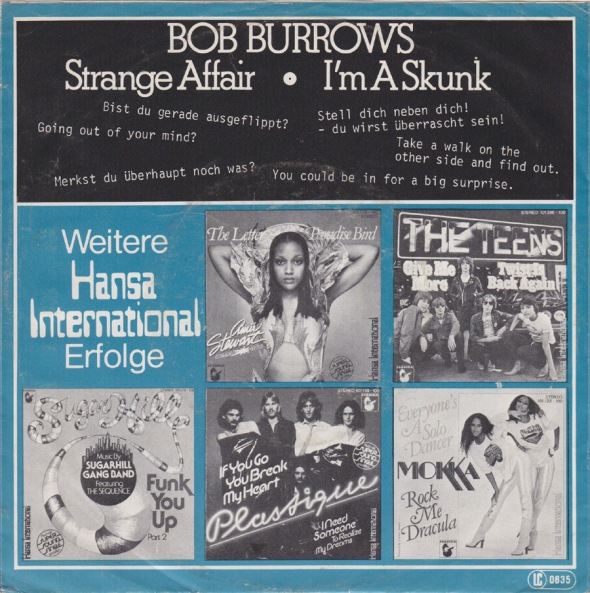 I´m A Skunk sounds like Oingo Boingo, kinda between new wave and punk. Like a lot of punk novelty records this was more  punk than a lot of real punk records were. It´s still more stupid, more silly and more strange than most punk records today. The sleeve  also is a strange affair, it doesn´t give away what kind of music might be on the record. It´s probably also one of the reasons why it flopped and why I couldn´t find out anything about the record on the internet. The German Hansa label still is a treasure trove of forgotten music because they put out so many weird one-off records.

And they knew it…

Just to add some “good” music, I had this record digitized and scanned a couple of weeks ago and wanted to post it together with the other 80´s records.  Since then the Short Sharp Kick In The Teeth blog beat me to it and posted these songs before I did.  I swear, before that there was no trace of the record on the internet. At least this German release has a diffrent sleeve so I´m going to post it anyway. The British EP  has one additional song and a much nicer glossy gatefold sleeve.

Eric Blake were from Essex and as the info says their lead singer Julie Harding was 17 years old at the time. Other group members were Alan Baker, Ian McKenzie and Mick Fanning. 80´s Girl is a nice catchy powerpop song whereas Born To Be Special is poppy ska. 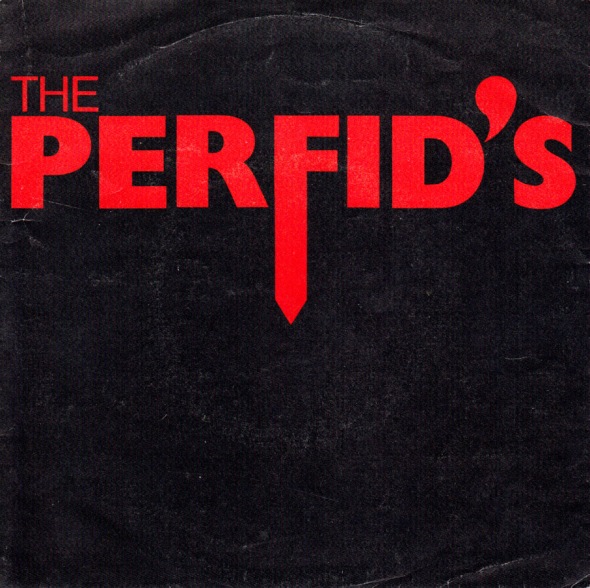 When I started this blog three years ago my ambition was to explore new territory and to only “publish” material that has never entered the digital world. As much as I like the cool music of fabulous record labels like Bear Family,  Charly and Ace,  it would be pointless to try to find obscure stuff in their field. They and many other re-issue labels went out of their way to re-discover lost music  in the 70´s and 80´s.  Posting (“re-releasing”) music that they re-discovered 30 years ago didn´t pose a challenge,  so my focus was on material that is still too bad or strange to ever be considered for re-release by a proper record label. Music that seems to have no commercial value today: private pressings, advertisement records or just plain weird stuff. Mostly no rockabilly, rock´n´roll, garage or soul music. No cult stuff.

Over time I have gotten less strict about my posting policies because I felt that maybe people would like to listen to more “good” music and also posted  single songs (albeit digitized from my original 45´s) that had previously been re-released. Basically I turned into a DJ again, something I wanted to get away from when I started this blog.

I also got softer,  because nobody else seems to care about any kind of “music blogging ethics” anyway. Blogs are the new Napster and I´m in the same boat if I like it or not. Posting material that I do not hold a copyright of, no matter how obscure it might be,  is just as illegal as posting a brand new CD.

Still so far I have only gotten supportive feedback from people involved with some of the records I posted. Some even said, that they´re glad I did, because they never had a digital version of their music. A lot of artist don´t hold the copyrights to their own music anyway and are simply glad that somebody cares enough to put it out there. Unless  they were cult artists or played a cult style a re-release of their music is very unlikely. I don´t really care about the legal issues, but  to make it a little more exciting for me again and to  get a better conscience about blogging,  I will return to my initial restrictive guidelines. So expect a lot of bad records to be coming in the future…

This private pressing of the Perfid´s from Zürich, Switzerland is one such record that has never been re-released. It most probably would have,  if it was in a cult style like punk or metal, but it is neither and both. Not metal enough to be metal and not punk enough to be punk. That said, it´s not a bad record at all, in fact I like it a lot. The cool thing is that they sing in a Swiss dialect that I can only understand partially, like the intro to their theme song that states that they started the group in January 1981. Besides that,  I don´t know anything about this group simply because there is nothing to be found about them on the internet. Check for yourself:  if you´ll search for them, you´ll find this post.