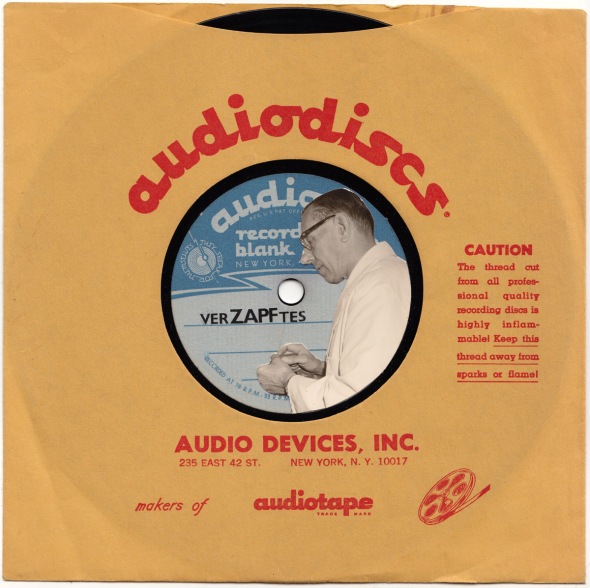 My girlfriend fished this record out of a box while waiting for me in a Berlin record store in 1998. I remember, because it was before we moved together and the store was near her old apartment. She always had a good eye for picking odd looking records, like this one. Audiodiscs were one of many home recording labels that produced blanks that could be recorded at home with special recording machines. There is no date given on the record but I would say late 50s, because it already runs on 45 rpm.

I suspect this one sided record was made as a gift to a Mr. Zapf by his co-workers, celebrating his 25th anniversary with the Askania company. It´s  illustrated by an image of Mr. Zapf in his lab coat, that was cut out of a photograph and glued onto the label, plus the word “verZAPFTes” (a play on words meaning “doing stupid things”) in rub-on letters. The unknown person who is singing, accompanied by drums and accordion, put some biographical details of Mr. Zapf´s life into humorous rhymes:  Askania  has been living with mechanic Zapf for 25 years (Askania is a Berlin company for optical and precision mechanics)… Mr. Zapf is known as a diligent worker…  has survived the war as a messenger in the army…  landed in Novosibirsk, Russia…  marched to the sea… failed to conquer (the Russians)… dealt in oil… victorious at last… never a big talker…  likes to wear long johns… 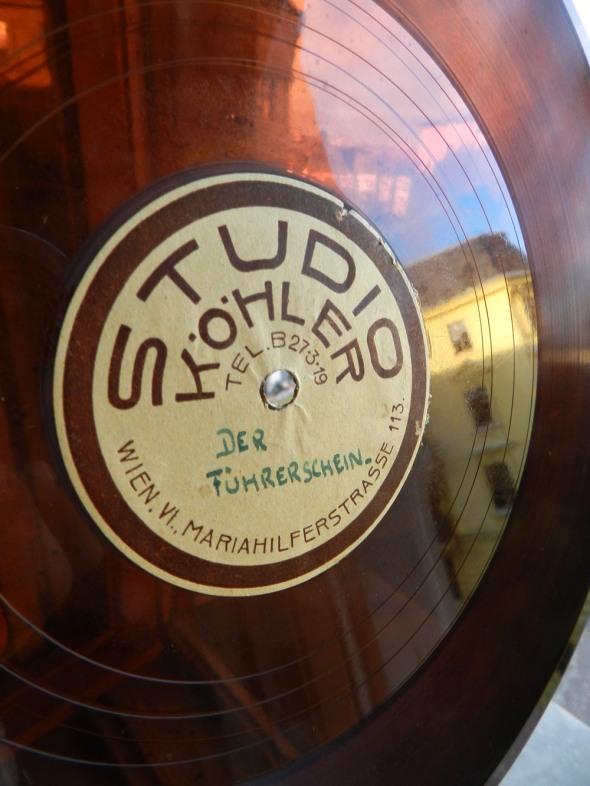 Two weeks ago I found this transparent flexible 10″ record in an antique book store. The material the record is made of seems to be some sort of plastic, that is much lighter than shellac. On this home recording a certain Nina Winter is reading a poem in celebration of her friend Maria “Mitzi” Lichtenegger passing her driving test on October 25, 1941 at the driving school Suchanka in Mariahilf, Vienna. The rhymes reveal that Mitzi´s husband had already passed the test before her and that her driving instructor Mr. Fischer, though a rigorous and earnest man, was quite pleased with her. That´s about all the personal information I could gather from the record.

It´s a glimpse into the private lives of ordinary people in war time Vienna. While millions were expelled, killed and put into concentration camps, others were obviously still passing the time with making their drivers licenses, writing poems about it and then even having them recorded…. 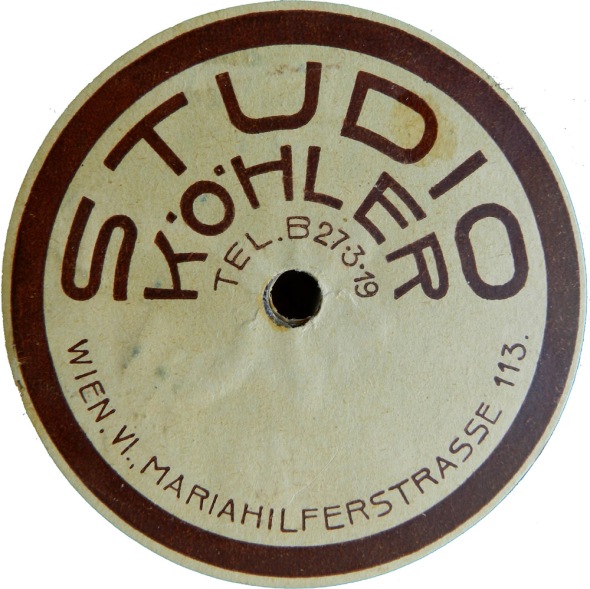 Another home recording that offers a short but intimate view into German social life in the 1950s: 43 seconds of a recital by a twelve year old girl. I suspect her name is Christel because that´s what is written on the sleeve.  She wishes her father a happy birthday and tells how she first got to know and love him ten years before,  after he came home from being a prisoner of war. Quite a common story in many German families in the post-war era.

The label says that it was recorded by Schnello-Tondienst Berlin. The record is from the mid- to late 50s, because it runs on 78rpm. No further information given.