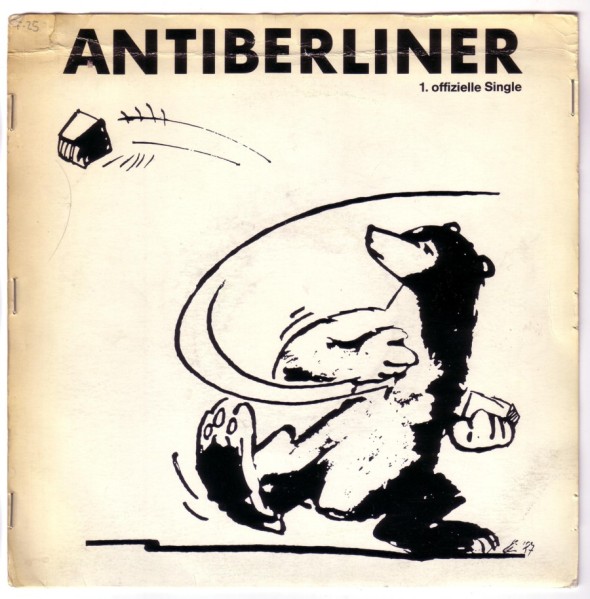 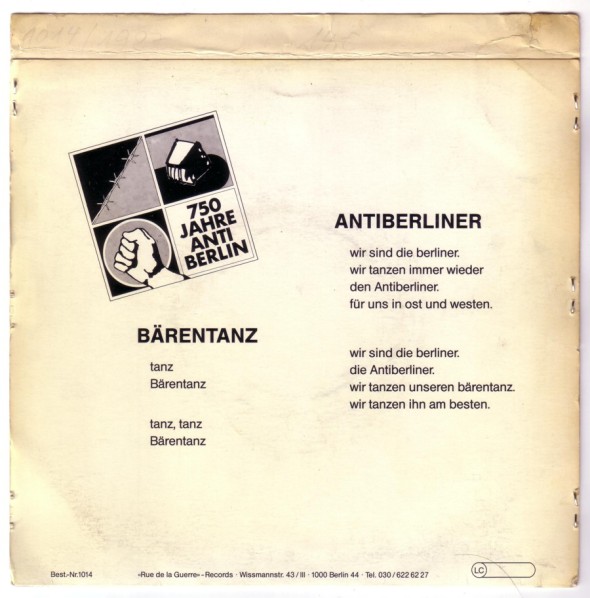 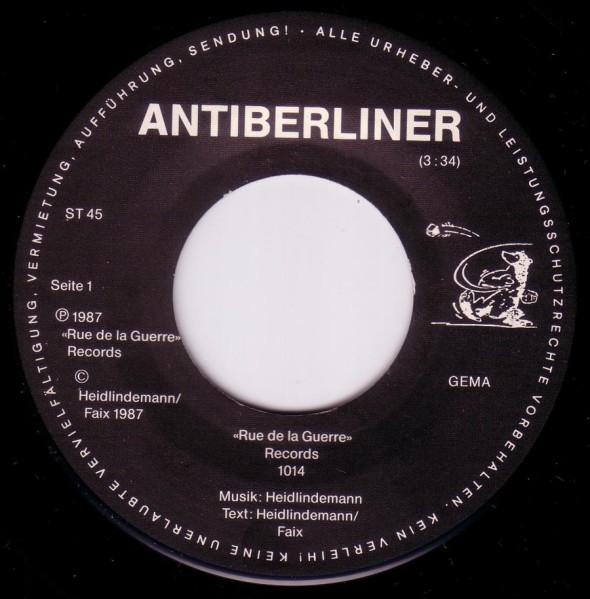 One really good thing about living in this city is that you don`t have to like everything about it. There is a history of discontentment here that is refreshing. The people who did this record didn`t really hate Berlin. The music and the lyrics are quite upbeat and optimistic.

On may 1st 1987, after a spontaneous demonstration, a riot broke out that spread throughout Kreuzberg. A lot of shops were looted and a supermarket was set on fire. In response to the riots Berlin mayor Eberhard Diepgen called anarchists and autonomous people “Antiberliners”. In the month following that incident a bunch of people took that word, reversed it and produced this nice 45.

Actually this is pretty much an ode to the other Berlin. The Berlin of the outsiders. 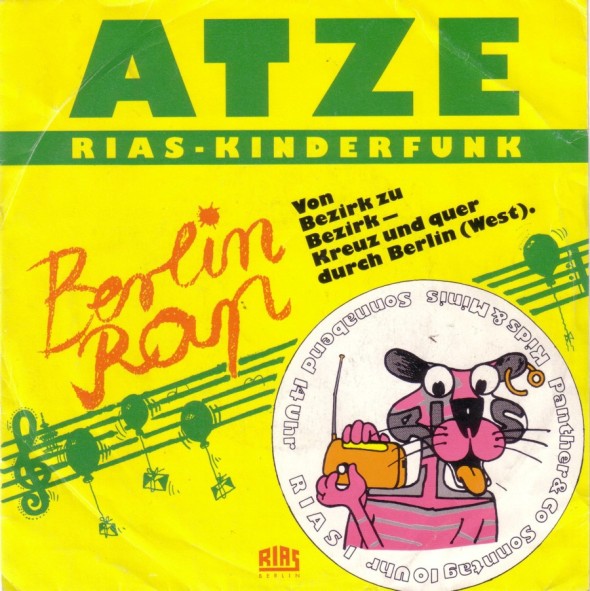 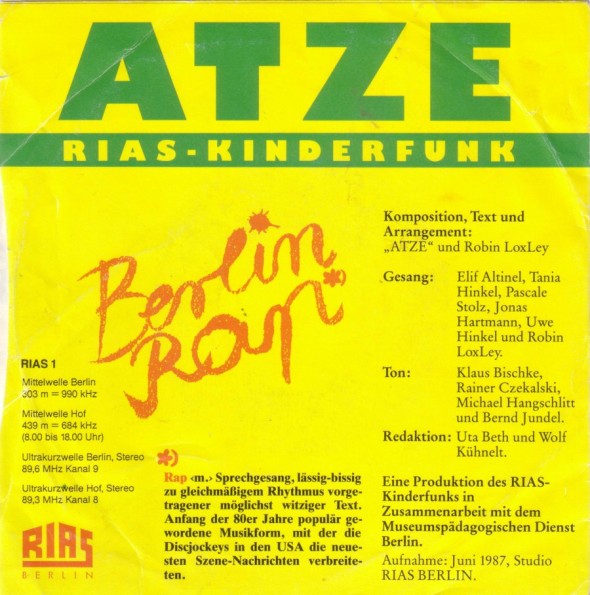 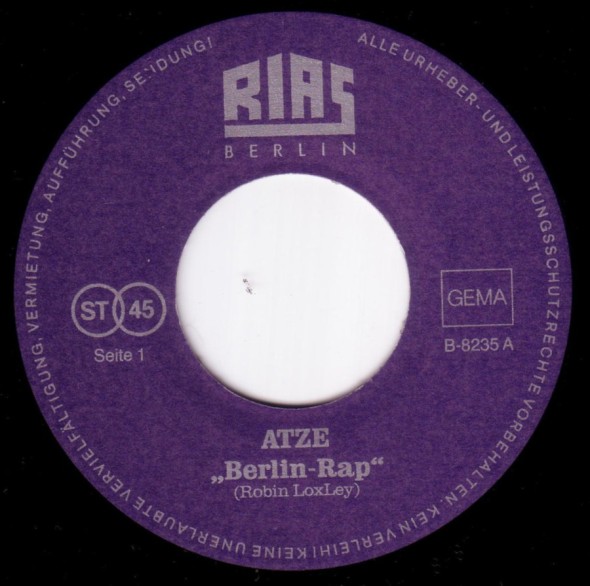 RIAS (Radio im amerikanischen Sektor – Radio in the American Sector) was a radio station in the American Sector of Berlin (1946 to 1993). This record was produced by the children’s section of the station. Just like most kids stuff this is really unauthentic but still quite funny because a lot of parts of Berlin are mentioned. Thanks to Hannes for lending this record to me.

This is a good example of the kind of music that the hard-working locals, the real born-in-the-city West Berliners, produce. Impossible that this could have been made by people moving to the city from elsewhere. Those people start bands like Einstürzende Neubauten. Musically this is meaningless but the lyrics make it kind of historically interesting. Singing “Uns jibt dit noch!”( “We`re still here!”) must have reflected a feeling a lot of Berliners shared when West-Berlin was an island in the middle of East Germany. Probably made in the mid to late 80s it was only a short time until that feeling changed. After the wall came down in 1989 the eyes of the whole world were on Berlin. 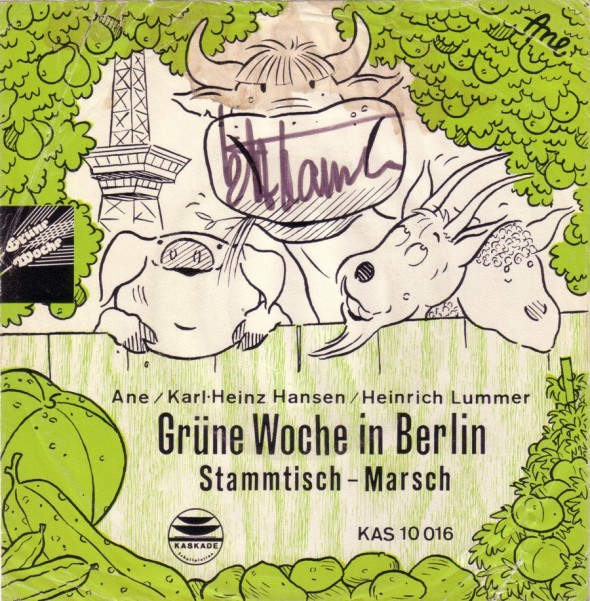 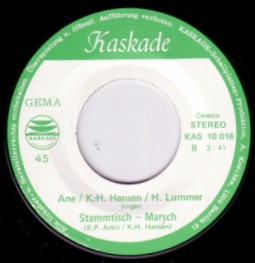 This song is really creepy but it cracks me up every time I listen to it.

There is something funny about right wing records like this. The music is the average humpta music and the lyrics are about drinking and how Berlin is the greatest but when one of the guys screams:”…und wenn der Wodka fliesst, wie unsre Spree!!!…”( …and when the wodka flows just like our (river) Spree( that runs through Berlin)) that sends shivers down my spine. On the other hand one of the “artists” on this record, Heinrich Lummer a local Berlin politician, certainly is very very conservative. From 1981 to 1986 he was senator of internal affairs in Berlin and responsible for evicting a lot of squats. Among leftists he was really hated deeply. In the late 90s Lummer hosted a talk show on local Berlin Television. In one of those shows comedian Hape Kerkeling played a major prank on him disguised as a enraged private gardener. 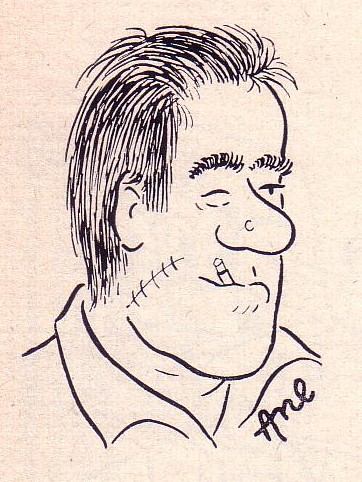 The cartoonist ANE, born Aribert Nesslinger in 1924, was a well known Berlin cartoonist  Just like Stenzel he is forgotten today. Humour depends so much on the time and people it addresses and their kind of humour just went out of fashion in the70s. 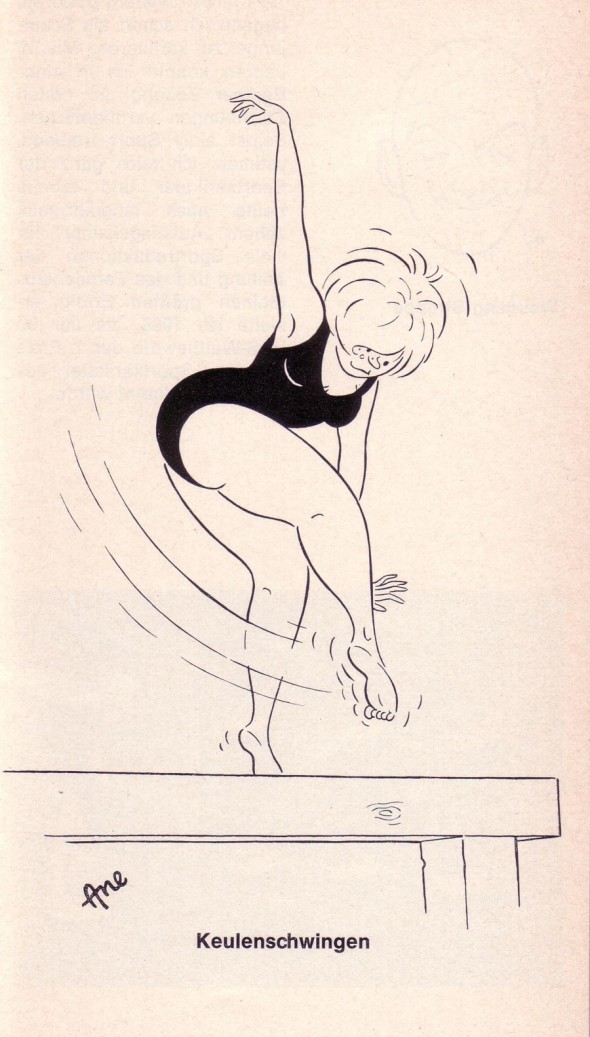 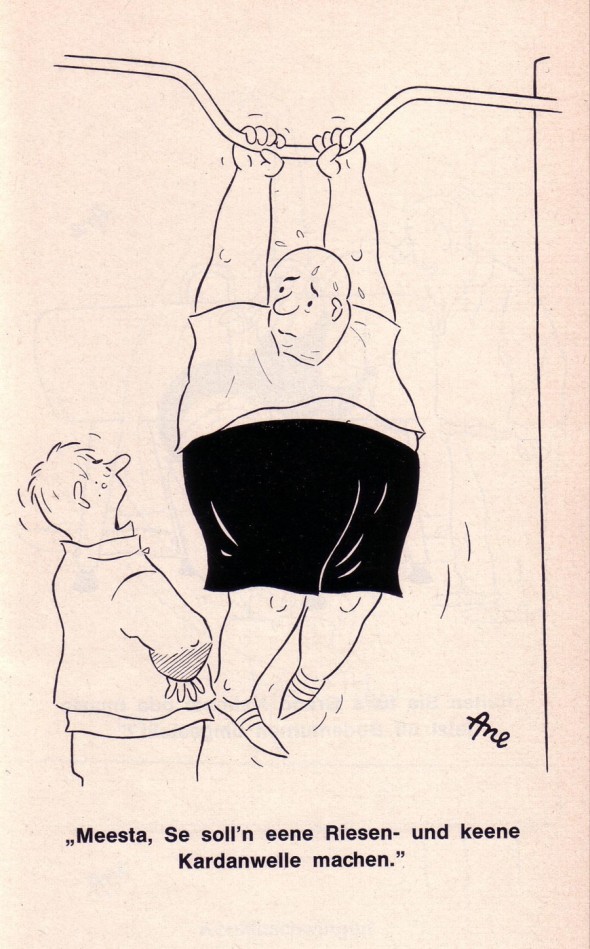 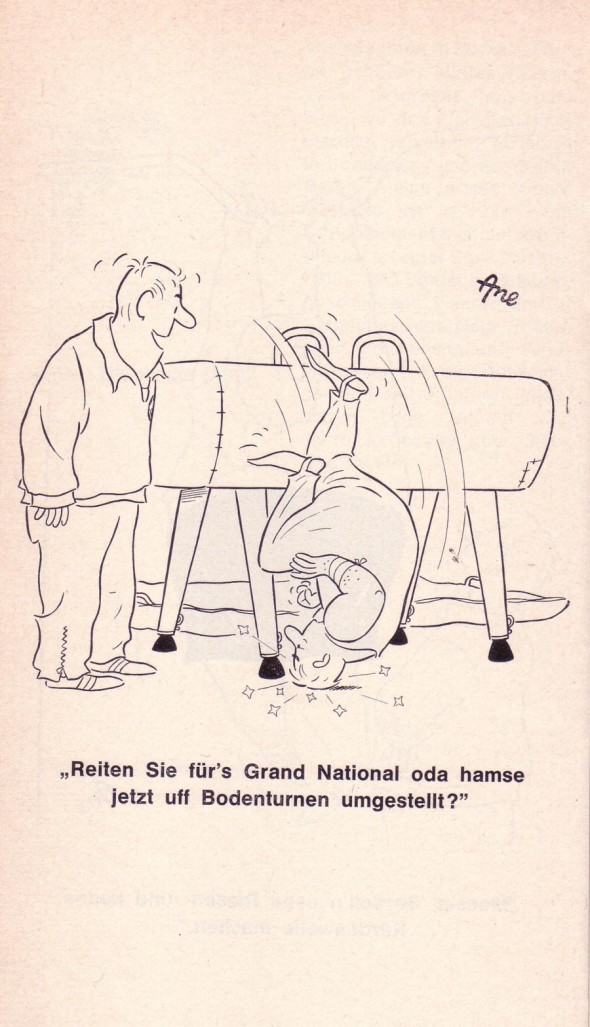 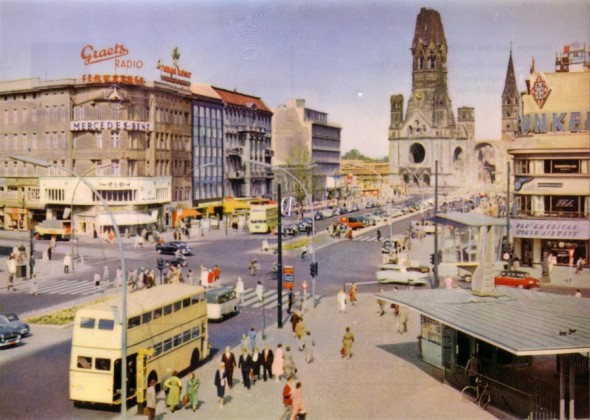 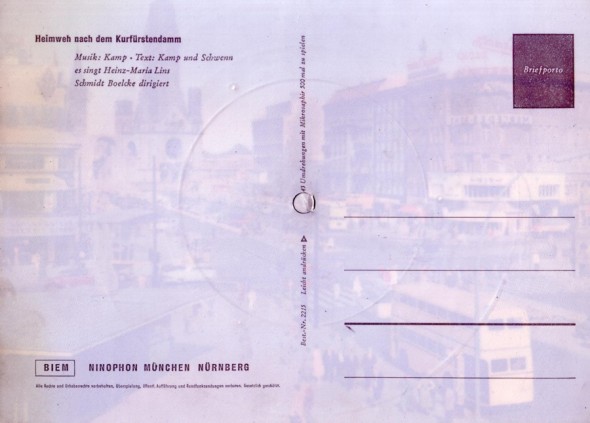 One more from my postcard record collection. Pictured is the Kurfürstendamm in the 50s, Berlin`s main street for shopping until the fall of the wall. The song “Heimweh nach dem Kurfürstendamm”(“I`m feeling homesick for the Kurfürstendamm”) was made famous by Hildegard Knef. It is still one of the most well known Berlin tribute songs.

I`ve got the Ku`damm in my room…

Guessing from the label of this Flexi disc this was a supplement to Poster Press Magazine in the 70s. On the record a German girl claims to have been Jimi Hendrix girlfriend. 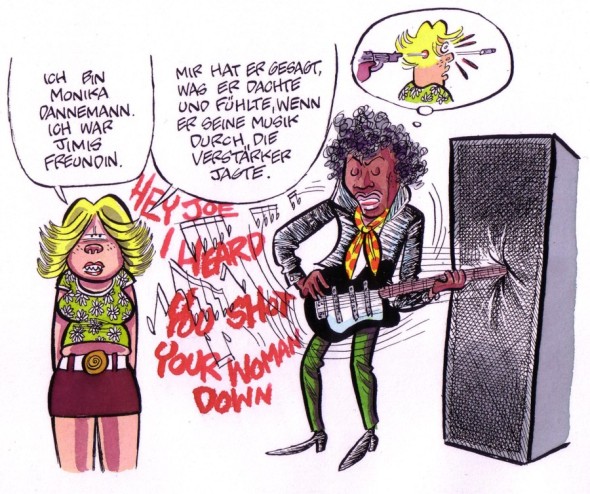 With a deeply depressing voice she says: “My name is Monika Dannemann. I was Jimi`s girlfriend. He told me what he thought and how he felt when he drove his music through the speakers.”

You have to listen to this. Hilarious!

I am not a journalist and not used to do a lot of research. When I wrote about Ha-Ga I searched for hours for details about her life. With this piece I was a little lazy. There is a whole page on Monika Dannemann on Wikipedia. Apparently she is quite well known for being the last person to have seen Jimi Hendrix alive. Monika Dannemann was a fine art painter and led a very interesting life. She did write a book about Jimi Hendrix that came out in 1995. 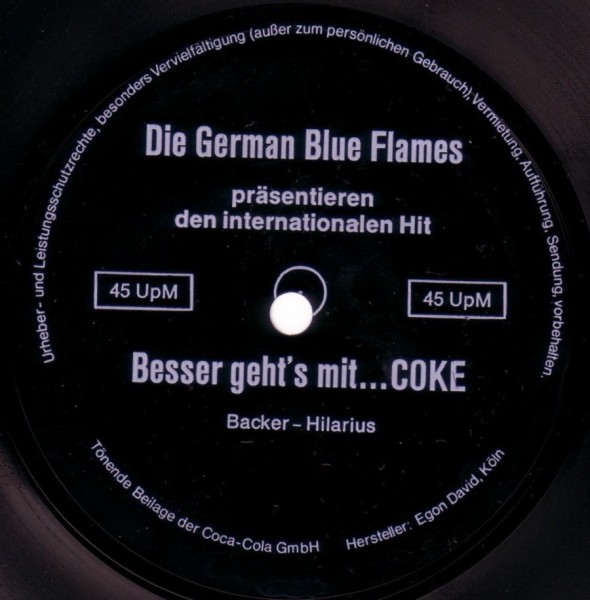 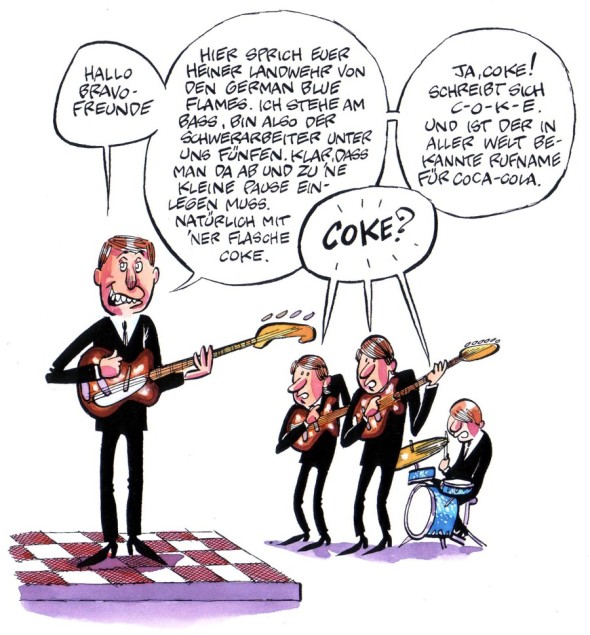 (“Hello Bravo- friends, this is Heiner Landwehr of `The Geman Blue Flames` speaking. I´m the bassist, so I’m the hardest-working man among the five of us. So every once in a while I need to take a little break. Of course with a bottle of Coke.”

“Yes, Coke! It´s spelt C-O-K-E and throughout the world that is short for Coca-Cola.”)

You see, back in 1966, us backwards Krauts didn`t know what Coke was.  So the guys at Coca-Cola thought about some Re-Education.

Well, it didn`t work. 42 years later we still don`t say Coke. If we want to order a Coke in Germany, we order a Cola: “Eine Cola, Bitte!”

This is a fun record and the Flames turn out a nice beat version of “Things go better…”, including a great guitar break. Bear Family Records reissued the German Blue Flames , as well as every other “important” German beat band, on their 30-CD series “Smash…! Boom…! Bang…!”-Beat in Germany- The 60s Anthology. 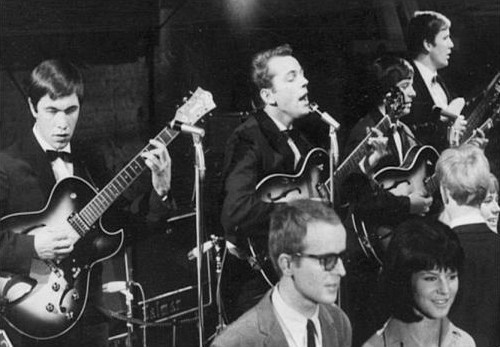 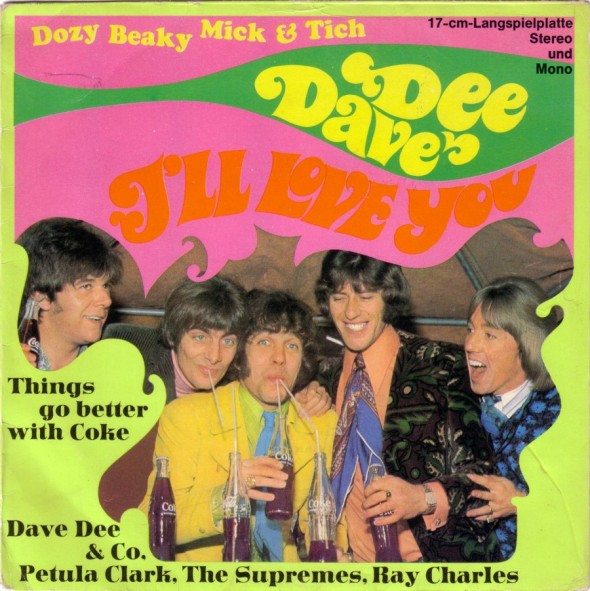 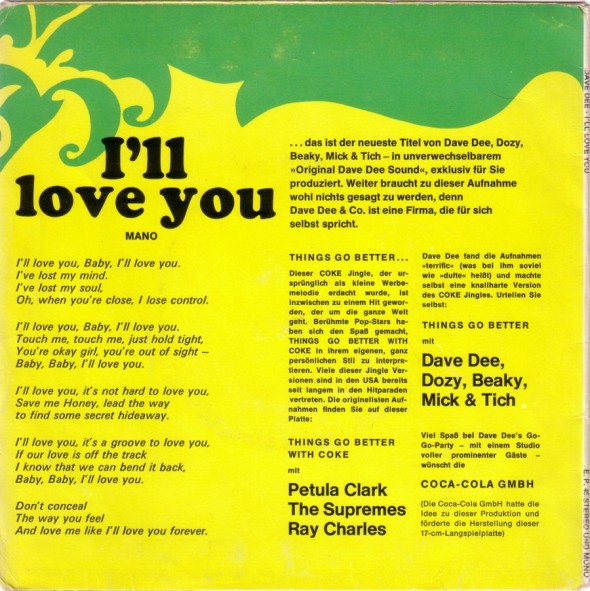 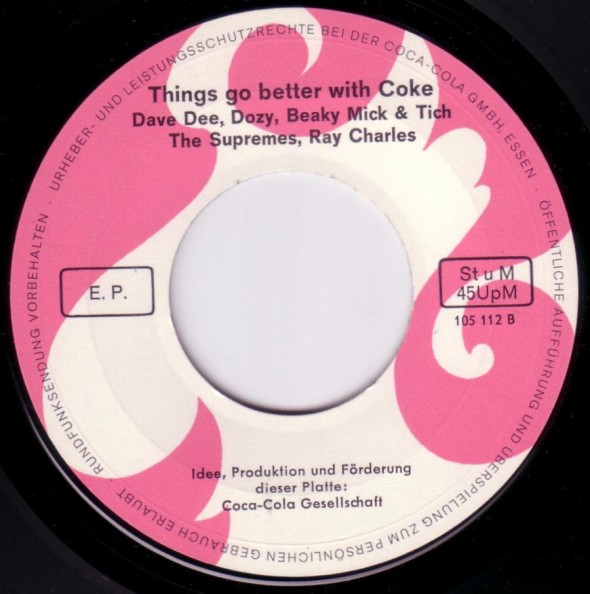 I still hate advertisement but this is my favorite advertisement-song of all time. Ray Charles !!! and the Supremes!!! singing the Coca-Cola song!!! Fantastisch!!! 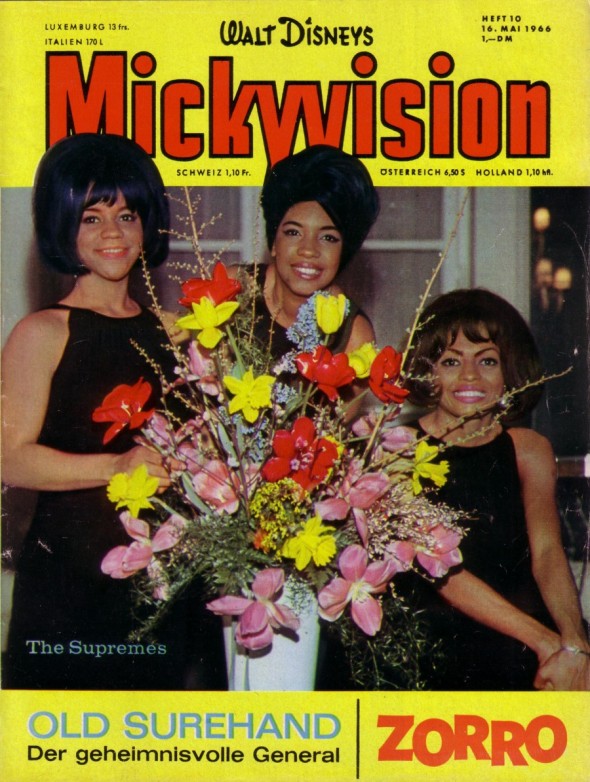 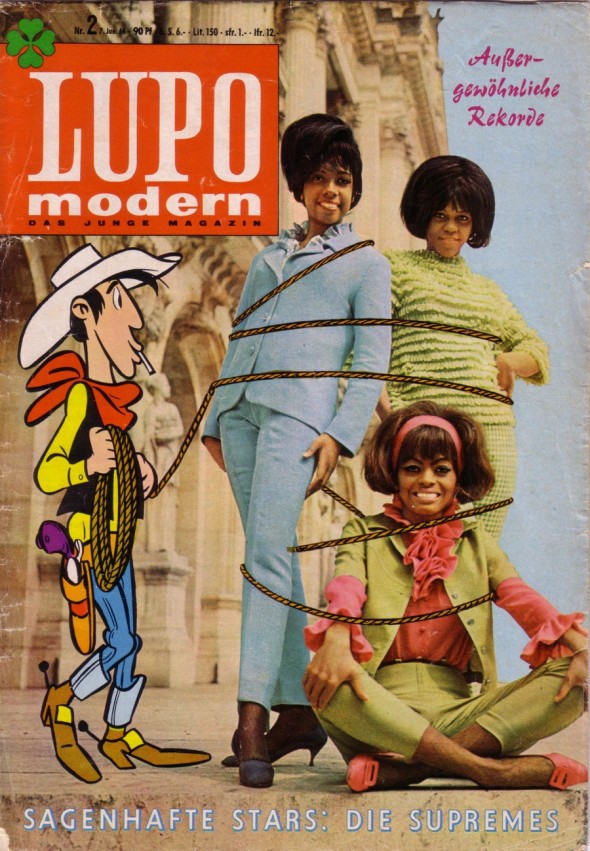 I´m throwing these two comic magazine covers in, because they fit with the Supremes and the time frame. 1966, what a great year! The year I was born…